How About Some Food Pics?

It's been a while, so I'm going to throw up just a bunch in one post. You should be able to click on each image to get the larger version. 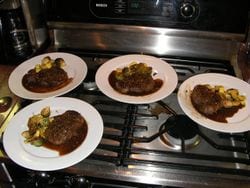 The first one is a dinner I prepared for my parents a couple of weeks ago. These are filets that I pan fried (to medium rare, of course) in cast iron and in leaf lard from Prather Ranch. Good lard has no pork taste to it, is white, and simply wonderful to cook with. I seasoned them about an hour earlier with a little salt, pepper, and garlic.

The vegetable is yellow squash and brussels sprouts. I fist tossed them in a fry pan with some ghee and a bit of bacon drippings. Then, onto a cookie sheet they go, into the oven at 350 for about 15 minutes. When done, crisp them a bit under the broiler for just a bit, and don't take your eyes off them. Things can happen quickly with broilers. 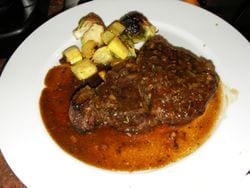 The sauce is really the special part of this, a beef stock and red wine reduction with some finely chopped onion and garlic, a bit of parsley, rosemary and sage. I don't use grain or starch-based thickeners, anymore. The key is to start your sauce early enough to let it reduce and thicken on its own. I do it at a medium low heat. Be patient. If it doesn't thicken, you might try some almond meal which I've has some success with and if you don't overdo it, does not make your stuff taste like almond. You may get a slight "nutty" essence, which can be pleasant.

It's best to make your own beef stock, but that's really time consuming (see below). Failing that, I sometimes use the Korr bullion cubes, but with a fraction of the water called for. You can also get demi glace (here too), and I sometimes use that; but it does have a touch of gluten in it from the roux needed to make genuine demi glace. But, on occasion, there is simply no flavor on this entire Earth like demi glace. I am making sauces more and more. Reminds me of the days living in France, for one. For another, it gets my wife to eat more meat. I saw her eat a medium size filet in full for the first time ever (in over 10 years), and it was all because of my sauce. Here's a hint: make a beef reduction sauce for your steaks, roasts, or even ribs as above, and add the equivalent of a half small fresh jalapeno pepper with seeds per four servings (very finely chopped — minced, actually). Outta' this world. I've tried the red pepper flakes when I didn't have fresh jalapeno; no substitute. 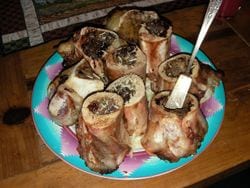 Next up, bone marrow. That's what this and one other bone came out as — as the first step in a very long process. The butcher, of course, cut up the bones, but out of the two 8 pound beef femurs, those were the only ones with useable marrow in them. The rest went onto a cookie sheet and into the oven at 450 until well browned. Then they went into the large slow cooker, covered in water with a couple of tablespoons of vinegar to get that started.

The marrow bones go onto a cookie sheet standing up as they are on the plate. I placed a small dollop of crushed garlic on each one. Into the oven at 450 for about 15 minutes. When the marrow begins to sink, you're done. I garnished with a sprinkle of parmesan cheese.

My first time eating them and I was impressed. Very nice. The texture is fatty, but in a soft, creamy, warm way. Wonderful. We were also eating my aunt's wonderful French onion soup. A bit of marrow on the spoon, dipped in the soup was well worth a try. After eating the marrow, the bones went into the slow cooker along with the other bones. They'd stay there for the next full 24 hours. 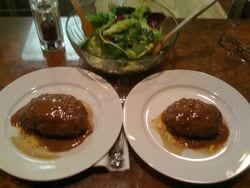 Then, yesterday, I ended a 29-hr fast with a craving — a big ground beef patty. But, I wanted a sauce on it.

I actually used demi glace, and added some red wine, sour cream, assorted spices including a dash of red pepper flakes, and a bit of ghee and lard. The sauce separated a bit owing to the fat from the interior of the burger. Oh, well.

For the burgers, I used 80/20 ground beef, chopped some onion finely, added some minced garlic, red pepper flakes, cumin, and mixed it all up. It was a bit unpleasant outside, so rather than grill, I did them under the broiler on low. It was very tasty, indeed. A really nice way to do a burger, and very worth the experiment. Incidentally, for those who haven't read my food posts before, I almost never cook from a recipe, and I almost never make anything the same way twice. Virtually everything is always a one-off with me. That's what makes cooking, for me, a never-ending adventure. Each time is an opportunity to create something pleasant for yourself, and perhaps others, and it's unique — never to be experienced exactly the same way ever again. I never write down the specifics of anything I ever do, and plus, I've been known to take in a few drinks while cooking, so I wouldn't remember specifics anyway. 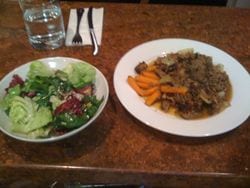 Finally, tonight's dinner — 20-minute prep time. You'll recall the cooker with the bones. Well, after a day, the bones were removed, but I scraped all the clinging meat and fat off and kept that in. I then chopped up two onions (with outer skin — adds brown), a half dozen or so small carrots, and about a stock of celery. Into the pot. After about 6-8 hours they were soft enough, and I mashed the whole thing with a potato masher, then left it to reduce overnight. I finally strained it and got about a quart of stock. Very tasty. So, tonight's dinner was a chunk of roast beef from the fridge which I cubed and then mashed up with my fist onto a cookie sheet. Then under the broiler on high for 5-10 minutes until brown and a bit crispy on top.

In the meantime, I took about 1/3 of that stock I'd made, and put that in a large saucepan along with half an onion and some baby carrots. Didn't need to do a single other thing. Brought to a light boil, turned to a low simmer and covered while the beef was still cooking. Once the beef was done I simply dumped the whole cookie sheet of roast beast in with the stock and vegetables, which by this time had reduced to a perfect consistency. 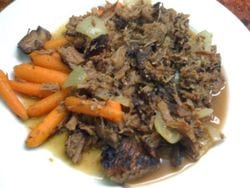 I'll tell you what: that home made beef stock was one hell of a lot of work, but it really makes a difference. Hey, I've got at least two more meals if I do sauces for meat, or perhaps one good soup. If anyone knows where to get good stock without a lot of salt and other additives, please drop me a comment. Anyway, I guess it was worth it — maybe once a year.

Now the bones, on the other hand… that's going to be regular fare around here. In fact, I have friends I'm dying to shock with this.

How sad, that we live in a world, where such wonderful animal pleasures are now deemed weird, gross, or worse: unhealthy. What ignorance. What arrogance.

I'll try to remember to keep my better camera with flash downstairs so's I can do better photos than with the phone. Some of those are pretty bad and doesn't reflect on how it looked or tasted live. It's a pretty poor substitute.