I’m probably going to review this book (The Paleo Diet, Loren Cordain) when I finish it, and that will include all the negative bits, of which there are a number. However, I’ve read enough that I’m convinced it’s an essential book that everyone interested in optimal health ought to read.

In spite of the silly (and misguided, in my view) saturated fat-phobia (oops, there I go…), it’s very valuable in view of understanding ourselves in terms of the vast and varied fossil record, i.e., human evolution in the context of diet (and most notably: how diet drove the evolution), and how utterly-woefully far we’ve come. A hint: fully 60% of the caloric value in the average American diet (grains, legumes, dairy, refined sugars, vegetable oils and all their derivatives) was not consumed by our primitive ancestors — AT ALL! Not a bit. Not even one ounce. This is faint recollection (feel free to correct), but when you compare that 60% with what would have been eaten in its place by a primitive ancestor 50,000 years ago, that portion of the primitive’s diet contains on the order of 300-600% more essential nutrition in terms of vitamins, minerals, phytonutrients, omega-3 fatty acids, etc. — not to mention an enormous reduction in anti-nutrients and toxins, found most prominently in grains, legumes and dairy.

Another bonus to the book is understanding how moronic vegetarianism is from an evolutionary perspective — although, thanks to the scientific wonders that brought us cancer, heart disease, diabetes and a host of other diseases of civilization, vegetarians can now survive, wherein previously, all humanoid vegetarian lines went extinct. In other words: thanks to the humanoid bone marrow and brain scavengers responsible for tripling the size of the humanoid brain and halving the size of the gut over the many millennia, vegetarians can now eat the diets of large-gut pea brains and chimpanzees, and live, even thrive. (!!!) Got it? MmmK…moving right along…. But first, don’t get me wrong. It’s not the choice to be vegetarian / vegan that’s moronic; I respect the choice, and it’s actually a good thing that they won’t go extinct as they would in pre-agricultural times (our big brains require LOTS of energy — you would have to eat the fibrous plant matter literally all day long, every day, just to survive — if even possible). No; what’s moronic is the use of science, evolutionary thinking, and the fossil and archeological record in a fraudulent effort to justify vegetarianism as our “natural diet.” It’s BS, and anyone who seriously thinks it’s not…is a moron, deluded, or a scamster. Frankly. All legitimate, peer reviewed archeological evidence — every shred — contradicts that notion and provides overwhelming evidence that humans were omnivores — oftentimes bordering on near total carnivory.

A fairy long excerpt, but it’s provided to illustrate the importance of getting and reading the book so as to understand how vastly inferior your diet likely is, compared to people who lived tens of thousands of years ago.

At first, humans were not terribly good hunters. They started out as scavengers who trailed behind predators such as lions and ate the leftovers remaining on abandoned carcasses. The pickings were slim; ravenous lions don’t leave much behind, except for bones. But with their handy tools (stone anvils and hammers), our early ancestors could crack the skulls and bones and still find something to eat — brains and fatty marrow.

Marrow fat was the main concentrated energy source that enabled the early human gut to shrink, while the scavenged brains contained a specific type of omega 3 fat called “docosahexaenoic acid” (DHA), which allowed the brain to expand. Docosahexaenoic acid is the building block of our brain tissue.

Without a dietary source of DHA, the huge expansion of our brain capacity could never have happened. Without meat, marrow, and brains, our human ancestors never would have been able to walk out of tropical Africa and colonize the colder areas of the world. If these people had depended on finding plant foods in cold Europe, they would have starved. In a landmark series of studies, my colleague Mike Richards, at Oxford University, studied the bones of Paleolithic people who lived in England some 12,000 years ago. Their diet, Richards confirmed, was almost identical to that of top-level carnivores, such as wolves and bears.

The archaeological record clearly shows that whenever and wherever ancient humans sowed seeds (and replaced the old animal-dominated diets), part of the harvest included health problems. One physical ramification of’ the new diet was immediately obvious: Early farmers were markedly shorter than their ancestors. In Turkey and Greece, for example, preagricultural men stood 5 feet 9 inches tall and women 5 feet 5 inches. By 3000 the average man had shrunk to 5 feet 3 inches and the average woman to 5 feet. But getting shorter — not in itself a health problem — was the least of the changes in these early farmers. Studies of their bones and teeth have revealed that these people were basically a mess: They had more infectious diseases than their ancestors, more childhood mortality, and shorter life spans in general. 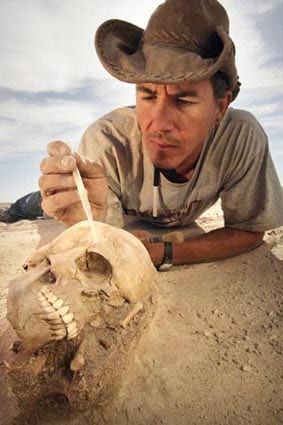 They also had more osteoporosis, rickets, and other bone mineral disorders, thanks to the cereal-based diets. For the first time, humans were plagued with vitamin and mineral-deficiency diseases — scurvy, beriberi, pellagra, vitamin A and zinc deficiencies, and iron-deficiency anemia. Instead of the well-formed, strong teeth their ancestors had, there were now cavities. Their jaws, which were formerly square and roomy, were suddenly too small for their teeth, which overlapped each other.

And here’s what 10,000+ year old wild human hunters tend to look like. Fat soluble vitamins ADEK2 were sufficient in mothers to ensure wide dental bridges (if you had to have teeth straightened, as did I — including removing teeth to make room — chances are your mother was severely fat-soluble vitamin deficient). I like how Stephan at Whole Health Source put it:

Both the Kiffians and the Tenerians had excellent dental development and health. Take a look at some of the pictures. Those are the teeth of a wild Homo sapiens. Straight, free of decay and with plenty of room for the wisdom teeth. They must have had good dentists.

Learn more about these amazing wild animals here and here.