Here's one that I often eat down at Trials Pub, as it's the most Paleo friendly dish on their menu. I didn't take as long to prep this as would normally be called for (more reduction on the balsamic vinegar), but it was very tasty nonetheless.

How it went was there was a chicken breast and a half, three strips of thick-sliced bacon, red onion, spinach, and a bottle of inexpensive balsamic.

Get about 1/3 to 1/2 cup of the vinegar boiling, then simmering to reduce. Ideally, you can get it down to a pretty syrupy consistency but I didn't take the time, this time. Instead, I used the bacon dripping to help it along. So, instead of an olive oil and vinegar preparation, think bacon drippings and vinegar.

So, cut up the chicken into chucks and cut up the bacon into about 1" lengths. Then fry up both together until the bacon is pretty crispy and the chicken is done. Then, chicken goes into the simmering balsamic for the time it takes to prep the spinach. Get a big salad bowl and strain the hot balsamic through a wire mesh over the spinach and toss thoroughly. Then, do exactly the same with the hot bacon dripping and toss immediately.

You can either fry the red a bit prior (to get translucent, or put them in with the spinach and let the heat from the balsamic and fat do its job. This time, I did the latter. You could also boil the onion in the balsamic.

Next, in goes the onion, chicken and bacon to be tossed together, then you serve on plates, leaving the excess dressing in the salad bowl. 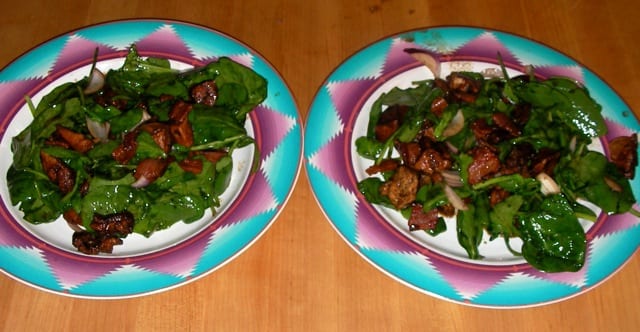