Well, perhaps not exactly, but let's see if we can't find something to cheer about. But first, in review:

In 1939, he published Nutrition and Physical Degeneration, a book that details a series of ethnographic nutritional studies performed by Price across diverse cultures.

Some of the cultures studied include the inhabitants of the Lötschental in Switzerland, the inhabitants of the Isles of Lewis and Harris in the Outer Hebrides of Scotland, the Eskimos of Alaska and Canada, the Native Americans, among the inhabitants of New Caledonia, Fiji, Samoa, the Marquesas Islands, Tahiti, Rarotonga, Nukuʻalofa, Hawaii, the Masai, Kikuyu, Wakamba and Jalou tribes of Kenya, the Muhima of Uganda, the Baitu and Watusi of Rwanda, the Pygmies, and Wanande in the Congo, the Terrakeka, Dinka and Neurs of Sudan, the Aborigines of Australia, the inhabitants of the Torres Strait, the Māori of New Zealand, the Tauhuanocans, Quechua, "Andes Indians", "Sierra Indians" and "Jungle Indians" of Peru.

In his studies he found that plagues of modern civilization (headaches, general muscle fatigue, dental caries (cavities), impacted molars, tooth crowding, allergies, heart disease, asthma, and degenerative diseases such as tuberculosis and cancer) were not present in those cultures sustained by indigenous diets. However, within a single generation these same cultures experienced all the above listed ailments with the inclusion of Western foods in their diet: refined sugars, refined flours, canned goods, etc.

The book is available online.

Now comes San Francisco physician, Daphne Miller, and a book called The Jungle Effect. Given the title of this blog, that's certainly a book title that I could get behind. 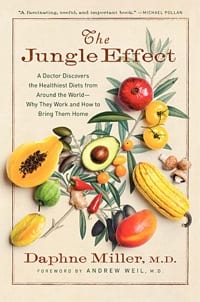 So, just from the cover, I can kinda get an idea of which way this book slants. I'm sure Michael "eat mostly plants" Pollan would approve.

At any rate, thanks to a friend down the hall (thanks, Marcus) I did listen to a radio interview and I think she does get a lot of fundamentals right. Obviously, number one and the thing I can even agree with whole food vegetarians and vegans about: dump the flour, sugar, vegetable oils and all the myriad products derived therefrom, and you'll be way better off. And, in fact, in spite of all the cheering around here over natural fats and the meats they go so well together with, it must be emphasized that the very most critical aspect of all of this is getting the processed frankenfood crap out of your life.

You'll be glad you did, and you may even end up embracing a Paleo-like, high-fat diet, as I do.

Now, this is not a book review. Dave Dixon at Spark of Reason has done a more than adequate job of that.

However, I did listen to the complete 55-minute interview on KQED, public radio. That was quite interesting in that she clearly understands that it's not just natives eating native food, but what happens to some of the natives who venture to the modern world. They get the same sets of diseases, and when they return, they no longer look anything like their brothers and sisters — no bout a result of many added pounds, as well as the fat-face inflammation that I used to suffer from and so many Americans still do (for more information, consult the "Dean Ornish chubby-face diet"). She also seems to know about disease association issues with vitamin D, and says that virtually 100% of the patients she sees in San Francisco are deficient.

But the real funny thing, one that gives me a different perspective than I had after reading Dave's book review, is her manner of almost apologizing over the issue of fat. In one segment of the interview, she acknowledges healthful cultures that get a lot of fat from heavy cream. She offers it up both apologetically and also as a kind of paradox. In another segment, she admits that the Okinawans totally converted her to being a pork lover and now she even cooks with "modest" amounts of lard. (You know, the Okinawans who live so long because of the white rice and fish they eat.) Anyway, note to the doc: you know about the Inuit "paradox," I gather. How about the Massai, who get about 35% of calories from saturated fat? And most of all, how about the Tokelauans, who get a whopping 50% of their calories, not just from total fat (60%+), but from saturated fat. I trust, good doctor, that you don't need a lesson in hypothesis (diet-heat-cholesterol) falsification.

Anyway, lest I dwell too much on the negative, I am generally positive about Dr. Miller's work, Dan Buettner's Blue Zones work, and heck, even Michael "eat mostly plants" Pollan.

Let's get over processed and "convenient," packaged, flour and sugar laden anti-food, and then we can quibble about how much fat, how much meat, how little vegetable, etc. And, even though I avoid all grains and legumes (as well as dairy), as I want optimal nutrition (and grains and legumes can't hold a candle to meat, fat, veggies, fruits and nuts, when these replace grains and legumes in the diet), there is certainly benefit to handling some of the nastier lectins in grains and legumes through soaking, sprouting, and/or fermenting — all methods used by various wise cultures over centuries.