Who eats the most of it? Think you know? Let's speculate first, based on heart disease death stats, by country. 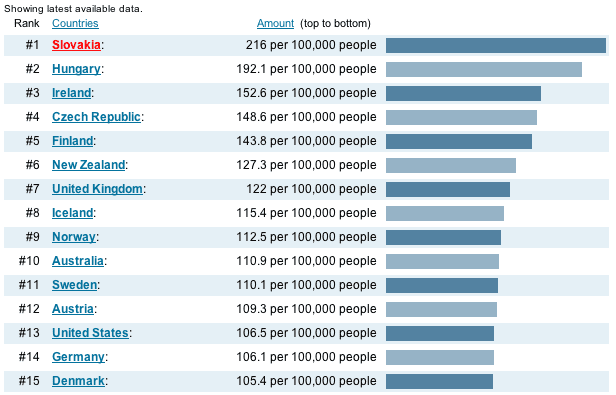 So, if the "diet-heart hypothesis" were true in its general position on fats, and on saturated fats in particular, then ought we not see some significant correlation between saturated fat intake and coronary heart disease deaths?

That graph above coveres only the first 15, but there are 26 countries if you click the link above. Well, let me let the cat out of the bag and just tell you that the highest saturated fat intake isn't among the first 15. And guess what, it's not even on the list of 26 at all, which goes all the way down to 30 deaths per 100,000 people.

In the United States, average saturated fat intake is estimated at around 12% of total energy. Now, what if I told you there was a country where it's documented that the population derives about 50% of it's energy, not from just fat, but from saturated fat! That is, they get about 60% of total energy from fat, 50% of which is saturated.

And they're not even on the list. Note: I realize the list is likely recent stats and the island in question probably has a much more modern diet now. The list is merely for illustration and a bit of blog drama. So for the real serious data and analysis, Stephan has the goods.

There are two reasons why the Tokelau Island Migrant study is unique. First, it's one of the best-documented transitions from a traditional to a modern lifestyle, studied over decades on Tokelau and in New Zealand. Regular visits by physicians recorded the health of the population as it shifted from a relatively traditional diet to a more Western one. The second thing that makes this population unique is they traditionally have an extraordinarily high saturated fat intake from coconut. They derive between 54 and 62 percent of their calories from coconut, which is 87% saturated. This gives them perhaps the highest documented saturated fat intake in the world. This will be a test of the "diet-heart hypothesis", the idea that dietary fat, cholesterol and especially saturated fat contribute to cardiovascular disease!

The Tokelau Island Migrant study isn't a perfect experiment, but it's about as close as we're going to get. Tokelauans traditionally obtained 40-50% of their calories from saturated fat, in the form of coconut meat. That's more than any other group I'm aware of, even topping the roughly 33% that the Masai get from their extremely fatty Zebu milk.

So are the Tokelauans dropping like flies of cardiovascular disease? I think most of the readers of this blog already know the answer to that question. I don't have access to the best data of all: actual heart attack incidence data. But we do have some telltale markers. In 1971-1982, researchers collected data from Tokelau and Tokelauan migrants to New Zealand on cholesterol levels, blood pressure and electrocardiogram (ECG) readings.

You can learn the results on Stephan's blog, but the punch-line is that the Tokelauans had ECG readings with 0.0% of men showing markers for a past heart attack, while substantial numbers of men in New Zealand – where saturated fat intake is 50% less — showed up with the markers.

Here's the thing, folks: falsification. For any hypothesis, you need but one observation that contradicts it, and you're done. For hypotheses like "saturated fat causes heart disease," every single hunter-gatherer and other non-industrial population that has been studied directly contradicts it. Game over.

So, Stephan does his typical marvelous job in sorting through all the relevant material, so why not go over and have a look.

Stephan told me in an email a couple of days ago that he's not done, yet. So, you might want to follow along by checking his blog regularly.