Hopefully, this sort of ignorance, that I blogged about here, will someday be a thing of the past.

Surgeon Shyam Kolvekar from The Heart Hospital at University College London, who performed Mr Haj’s triple bypass, said cases like this were increasingly common and highlighted the dangers of eating too much saturated fat.

As you know, I’ve many times highlighted the work of Dr. William Davis, a cardiologist who used to be ignorant, just like the guy above, and who now detects and reverses heart disease, all the while his patients eat plenty of fat.

Then just recently, I highlighted another hero: heart surgeon Dr. Dwight Lundell, in two parts (Part 1 / Part 2). You know what Dr. Lundell says about himself? He says that he “made a big mistake.” 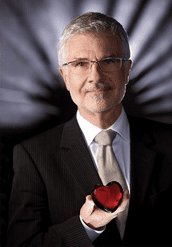 Now comes Dr. Steven Gundry, Director of The Center for Restorative Medicine at The International Heart and Lung Institute for Advanced Cardiac Surgery in Palm Springs, California, as well as being Clinical Professor of Surgery and Pediatrics at Loma Linda University School of Medicine. He was named America’s Top Doctor by Castle-Connolly Publications, for three three years running.

And, you can. Jimmy More did a two-part interview with him a couple of months back. Jimmy called it his favorite interview yet, and that’s inclusive of many great people he’s interviewed in about 200 podcasts so far. I have to agree. It was very fascinating.

Dr. Gundy himself lost 70 pounds on a Paleo-like diet, although he advocates that after the initial super high-fat, high protein, low carb phase that one gradually transitions to a sort of modified raw vegan approach, i.e., mostly greenish vegetable matter (which is about half vegetable protein, by the way) with about 5-10% of calories coming from animal and fish protein. He points out, correctly, that no primates are vegetarians. They eat lots and lots of bugs in the process of eating leaves, limbs, and stalks. At any rate, I’m fine with that, if that’s what you prefer. Not for me in a million years, but such a diet is in every way vastly superior to the SAD (standard American diet).

Now, how do you think Dr. Gundry became enlightened? He tells the story in the first part of the interview, but let me just recount it to wet your appetite. It was about 7 years or so ago that a male patient in his 40s came to him, had already had several heart attacks, and had been pronounced inoperable, as every single artery was 95% clogged. In essence, he had been given a death sentence, and it was only a matter of time.

About a year later, the gentleman returned to see the doctor and begged him to do another angiogram. Guess what? The 95% blockages had been reduced to 50% blockages. So, a “know nothing” — kinda like me — cured the profound ignorance of one of the world’s top heart surgeons and changed Dr. Gundry’s life and medical approach for good.

If you want to know more, then you can also get his book: Dr. Gundry’s Diet Evolution: Turn Off the Genes That Are Killing You–And Your Waistline–And Drop the Weight for Good.