I haven't talked much about this in a while, but on the heals of yesterday's post on fasting, Andy left a comment referencing a post by Rusty Moore of Fitness Black Book.

Fasted Workouts and Fasted Cardio vs EPOC – For Fat Loss

For the longest time, I didn't understand why I had more energy after fasting. I have my most productive hardcore workouts after fasting for 5-18 hours. If I ate anything in that 4-5 hour window before training, the workouts just weren't as intense. Ori Hofmekler explained where this "hidden" energy source came from…the Sympathetic Nervous System (SNS).

Go over and read more about the SNS.

As readers know, I have been working out fasted (18-30 hours) for a bit more than a year, now. I can't imagine doing it any other way. As an added benefit, take a cold plunge or sit in a totally cold bathtub after the workout, for as long as you can stand (in the summer, I somtimes remain in the 50ish degree water for 10 minutes). Then, don't eat until you're actually hungry, which, for me, is usually a couple of hours after the workout.

They can get real strong, can endure. They can kick ass.

Here, take a look at the short video from the 2008 Crossfit Games. Near as I can tell, those are 45 pound plates on a 45 pound bar, so 135 pounds altogether. And those pull-ups can be excruciating, I can tell you. Put them both together in a timed competition and that's really something.

I got that from Chris at FitnessFail who does a good job contrasting the model "look" verses the healthy and fit look, as displayed by the women in that video. As regards Miranda Kerr and Marissa Miller:

OK, does anyone actually think the latter two are attractive? Am I really this out of touch with what most people are into? With both of the above women, I see insanely thin people with no body (besides cleavage) and no muscle definition.

They’re nearly certainly what I’d call “skinny fat” I.e they’re overly thin, but the have no muscle to them and are still a bit soft. I’m sure this would be more apparent if the blemishes were not airbrushed out. The both have arms that look like skin over bones…. Again, maybe my own taste is different because I like athletes but in the model look I see frail looking women here, not something to aspire toward.

Yea, the only real change I see happening is acceptance of "full figured women." I should have taken a clip, but on one website I visited yesterday there was actually a lingerie ad with a picture of a very, very fat woman (but smooth & plump). So, you get skinny fat and just big & fat, now.

Correction: One commenter corrected me by saying those plates are 25 each, and then Dave in Ohio said they're 10. Looks like he's right. Still quite impressive. 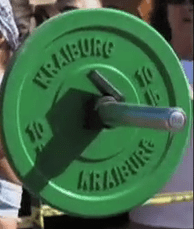 Two articles on fasting in today's LA Times, and both are very good in large part.

Running on empty: the pros and cons of fasting

"There is something kind of magical about starvation," says Dr. Marc Hellerstein, a professor of endocrinology, metabolism and nutrition at UC Berkeley, who studies fasting.

Adds Mark P. Mattson, chief of the laboratory of neurosciences at the National Institute on Aging: "In normal health subjects, moderate fasting — maybe one day a week or cutting back on calories a couple of days a week — will have health benefits for most anybody." Mattson is among the leading researchers on the effects of calorie restriction and the brain. […]

"We've been finding that putting an animal on a reduced-calorie diet for a couple of weeks dramatically slows cell proliferation rates," Hellerstein says. "This is the case in pretty much every tissue you look at: prostate, skin, colon, liver, lymphocytes."

Intermittent fasting and calorie restriction have also been shown in animals to reduce cognitive decline in diseases such as Alzheimer's disease and Parkinson's disease, Mattson says. […]

Among 448 people surveyed, intermittent fasting was associated with more than a 40% reduction in heart disease risk. Fasting was also linked to a lower incidence of diabetes. The study was published in October in the American Journal of Cardiology.

Pretty much substantiates everything I've been blogging about all this time with respect to IF. Of course, an article like that wouldn't be complete without a quote from a useful idiot.

Not all nutrition professionals see the merits of fasting. Some think of it as a recipe for disaster, setting up a person for binge eating and metabolic confusion.

Ruth Frechman, a registered dietitian in Burbank and spokeswoman for the American Dietetic Assn., , says she frequently sees such extreme strategies backfire. "You're hungry, fatigued, irritable. Fasting is not very comfortable. People try to cut back one day and the next day they're starving and they overeat."

Credentialed gibberish from a certificate holding, know nothing. Literally: she knows nothing about fasting and its practices. She's just quoting a textbook she read and got tested on. These people are contemptible, at every level.

The second article has some anecdotes of people who've seen success with fasting. Fasting strategies and pitfalls. Of course, they had to haul out another useful idiot.

Many people find that cutting back on calories causes their metabolism to slow and weight loss becomes difficult, says Andrea Giancoli, a Los Angeles-based nutritionist and spokeswoman for the American Dietetic Assn.

"The real danger of fasting when it comes to weight loss is you risk slowing down your metabolism, and that defeats the whole purpose," she says. "As soon as you start eating again, your body wants to store those calories."

Such ignorance, and they are the ones called on to render "expert" opinion. …As America gets fatter and fatter.

Every dietician and nutritionist in America ought to be fired on the spot, and then be pelted in the town square with rotten tomatoes. (Those of you who shouldn't, know who you are, and why you shouldn't.)

This comment came through on an older post from November on evolutionary nutrition. Let me quote Marisa.

Hi! I stumbled upon this "paleo" eating quite by accident. I have a gluten/casein allergy that has wreaked havoc on my health, and has induced autistic symptoms in one of my children. Since removing it from our diet, my eczema has abated, and my child's ability to cross-pattern appeared for the first time, along with her toe-walking (symptom of neurological damage) being a thing of the past … except when we get wheat contamination, and then she walks around like a ballerina again. (along with the diarrhea, aggression, and general malaise)

We experiemented with the whole GFCF (gluten-free/casein-free) world of other grains, but literally spent a fortune. In the hopes of reeling in the finances, I dropped all the "fun" foods, and stuck to non-allergenic foods that were readily available to us: grass-fed, organic beef, pork, chicken, vegetables, nuts, organic oils (EVOO, coconut and palm mostly), coconut milk, and some fruits (thank god for Whole Foods). Because of our leaky guts I shied away from legumes (mold). Well, there you have it: the paleo diet. As we progressed along this line, I was astonished at my kids' recovery: they were happier, less tantrum-y, their skin (which had always been dry) became dewy soft, their chapped lips were a thing of the past too.

This is purely anecdotal, but I have noticed a tremendous difference in the behavior of children in rough correlation to the things I see them eating. Kids eating lots of cereal, mac & cheese, cookies, boxed juices, sodas, candy and so forth often behave as awful brats.

On the other hand, my wife has some relatives with two young children that are perhaps the best behaved I have ever witnessed in my life. The mother is a fish-eating vegetarian, I never observe much junk in their house, and though not paleo, it's always real food served up around there.

Coincidence? Well, one of the things that Weston Price often remarked about during his world travels to study people living on traditional, non-industrial diets was the good behavior of the children, and that he never saw any sort of harsh discipline or corporal punishment involved.

Then, there's this from Stephan some months ago. Go see how closely the increased use of industrial vegetable oils tracks with homicide

One of the major dietary changes that has accompanied the downward slide of American health is the replacement of animal fats with industrially processed vegetable oils. Soybean oil, corn oil, cottonseed oil and other industrial creations have replaced milk and meat fat in our diet, while total fat consumption has remained relatively constant. The result is that we're eating a lot more polyunsaturated fat than we were just 30 years ago, most of it linoleic acid (omega-6). Corn oil may taste so bad it inspires you to violence, but its insidiousness goes beyond the flavor.

Stephan also has a follow up post well worth a read (The Omega Ratio), as in addition to the epidemiological correlations, he lists a number of intervention studies suggesting that improving the omega 3/6 ratio ameliorates some behavioral problems.

– EPA supplementation (a long-chain n-3 fatty acid) reduced aggression and depression in a group of women with borderline personality disorder.

So, are your kids brats, and you think that's just the way it is? How about stop with the poison (flour, sugar, processed vegetable oils and all the crap made from some combination of them)? feed 'em all the meat, natural fat, vegetables, fruits and nuts they want, only that, and just see what happens.

Here's three things I ate while in San Francisco this weekend, just so you know you don't have to go too far astray when dining out.

Late lunch at The Daily Grill on Saturday. A salad with their own blue cheese dressing, seared ahi tuna, flash fried spinach (fantastic; have got to try to duplicate) and some pickled cucumbers. 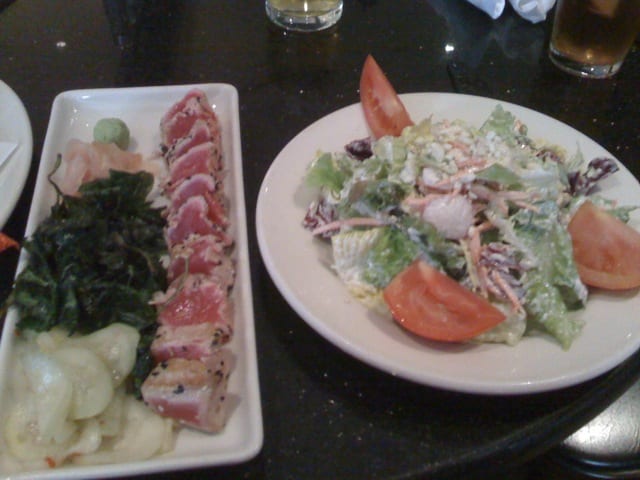 Then, a party at the home of friends in the Marina district that night. Our mutual friend and chef, Simon, catered, as he does every year. In addition to the unbelievable shrimp, scallops, foie gras, and other delectables that I didn't get pictures of, I did manage to snap this of two pieces out of about five of rack of lamb I ate. To die for. It was the second time I had rack of lamb this week, the first being the night of my birthday. My wife and a friend went shopping, and they did all the work. 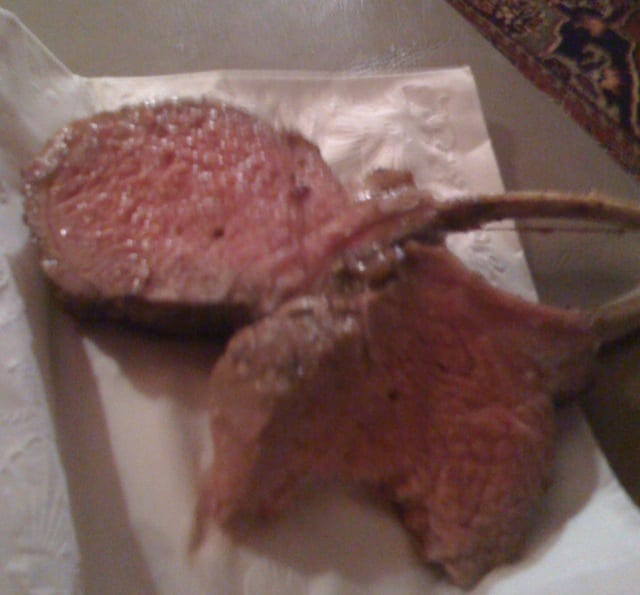 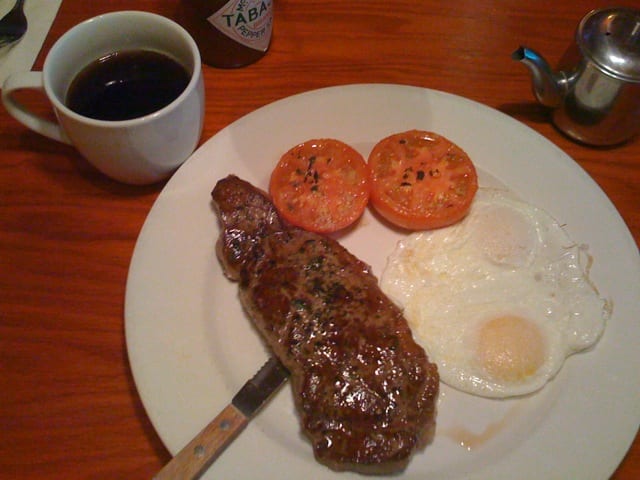