Time to see what some others out there are preparing.

First up is something I know a lot of you have seen around the general low-carb website Intertubes. It's The Bacon Explosion. This is a bit more involved than The Bacon and Cheese Roll. Frankly, I never had much interest in doing either of those. I'm not eating cheese except as a spice nowadays, and while I do eat bacon and quality made sausage (no Jimmy Dean), the thing just didn't appeal to me.

Now, reader Jessica has changed that for me and I do believe I'll give it a go. She made it much more palatable in my opinion.

For my Paleo version, I mixed 1 lb course ground beef and 1 lb ground pork with some fennel, sage, oregano, S&P, and used that for the sausage layer. I put olives and cheese in the middle instead of more bacon, and I used a seasoning blend of jamaican jerk spices, chili powder, smoked pimento powder, and a poultry seasoning from Whole Foods that contains red pepper, lavender and mustard seeds. I was going for something spicy, garlicy, a little bit smoky, and salty…It was phenomenal! 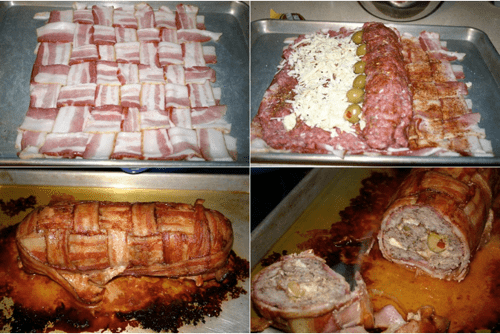 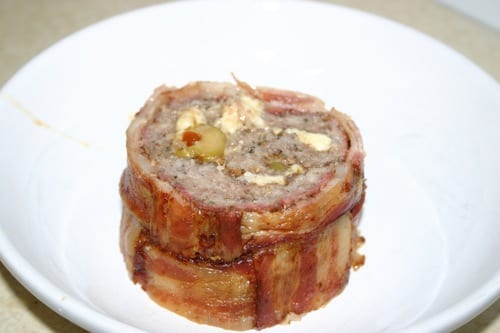 Next up, reader Brigitte makes a delicious looking dish:

Flash fried spinach & mushrooms. Meatballs in a demiglase with green peppers and pineapple.

Richard, per your advice, I used a white plate. I flash fried the spinach in very hot grape seed oil for no more that 30 seconds,
wonderful. 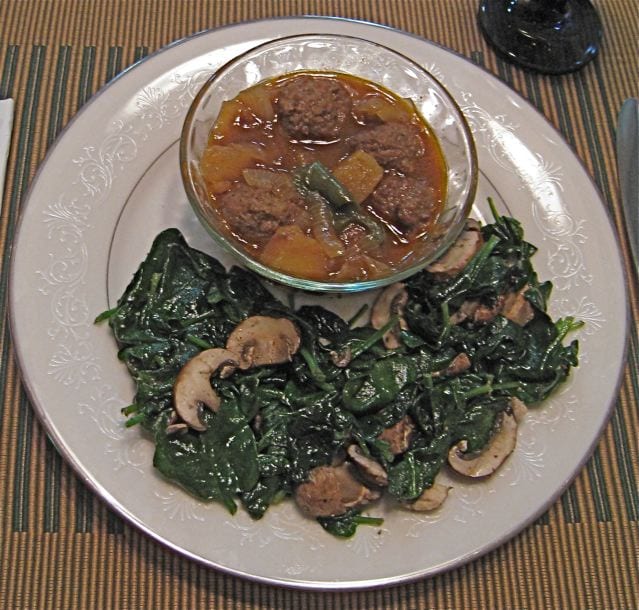 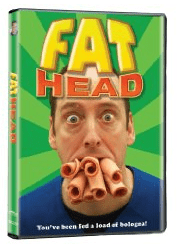 It's finally done and on sale.

There's also a website with various short clips from the film and I encourage you to watch them. They're funny. Especially the ones that show Morgan Spurlock to be the Moore-esque big fat liar that he is. This one is my favorite:

And, finally, doc Eades did an interview with the film's producer, Tom Naughton.

Another record month for traffic, with nearly 30,000 visits and over 50,000 page views. Awesome, thanks to you readers, and especially: you commenters. If you're a reader who's not taking in the comments, I encourage you to give them a try. There's lots of addendum info on almost every post, lots of anecdotes and personal experience, and lots or people who know what they're talking about. Very often, questions are being answered by other readers with particular insight or very similar experience. Feel free to ask questions in comments. 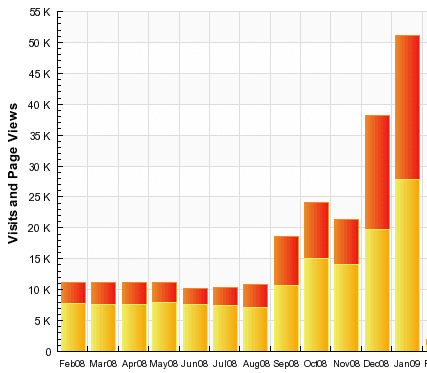 Most Popular January Posts So Far

Blogs Referring the Most Readers to Free the Animal in January

If you're a type 2 diabetic, the standard medical treatment of insulin supplementation is based on your continuing to eat a diet "rich in whole grains," sugar, junk, and so on. In essence, you're supplementing with a powerful hormone that does all sorts of damage to tissues long term, so you can eat cake, pie, bread, candy, sodas, etc.

You're taking a drug in order to eat inferior, less nutritious (or anti-nutritious) food. It's that factual; that simple.

Now, I certainly imagine a need for insulin supplementation for some few people, but I doubt most. Dr. Bernstein's free forum, for instance, is chalk full of former type 2 diabetics who became more knowledgeable than the doctors treating them, cut out the junk, went high fat, and cured their diabetes. Natural dietary fat is the key and secret.

The root cause of America's obesity and diabetes epidemic is ignorant fear of fat.

Now, today, a couple of readers send me a link to a BBC article.

When I saw the title, I assumed it might be something to substantiate what we Paleo types continually drone on about: eat a nutritious diet, one that does not include non-nutritious, relatively empty calories like grains and sugars that push out the high nutrition of meat / fish, natural fats, veggies, fruits, and nuts. This will keep your insulin low, and consequently, you won't develop insulin resistance.

Treating Alzheimer's with the hormone insulin, or with drugs to boost its effect, may help patients, they claim.

The journal Proceedings of the National Academy of Sciences reports insulin could protect against damage to brain cells key to memory.

UK experts said the find could be the basis of new drug treatments.

The article also says father on (twice, in fact) that those with type 2 are at higher risk for developing Alzheimer's. So, let's do 2+2. Both type 2, and now it appears, Alzheimer's, perhaps, are caused by insulin resistance, which means: your blood glucose is too high too much of the time (from eating too many carbs — grains / sugars — too often), your body pumps out the insulin to bring it down; and over a period of time, you become resistant to it. It doesn't have the same effect on you.

You're already familiar with this phenomenon. Try going drink for drink with an alcoholic. You'll be passed out before he's even slurring speech. Bum a smoke from a friend. If you inhale and finish it, you'll be green faced, sweating, heart racing, and likely hugging the porcelain soon enough. Many examples abound.

So, returning to the article, it ought to be clear enough, by now, that what you're up against is an out-of-control, state-protected industry (the FDA is a massive economic barrier to competition-scheme; it has little to do with protecting you) that conducts research with its only goal being new drug treatments.

Your doctors? Nowadays, most are no better than drug pushers. Drug pushers, however, retain some virtue in that they aren't parading around as "health experts."

After discovering I was Celiac, I found Celiac.com, then the Paleo diet, then Art De Vany's Blog, then yours. Thanks for the blog. I've got a quick question that I couldn't figure out where to post. I'm still pretty new to the Paleo diet. It's been working great, but I want to make sure I'm not [edited] myself up. So I know that we probably can't get more than 35% of our calories from protein (I guess the kidneys fry?), but even if I eat 20% of my calories as plants, this leaves 80% of my calories coming from meat. If I eat 20% complex carbs, 30% protein, then 50% of my carbs to come from fat, right? Where do I get the fat from? Should I simply eat a lot of avacados and olive oil? Or does most meat have enough fat that it's not a problem?

Now, your kidneys won't fry at all; you will simply find yourself incapable of overdosing on meat (i.e., you'll eventually get sick and puke).

Give it a shot. Fat is king. And BTW, you might monitor Mark Sisson's site as well. He often makes this point about fat.