It Takes a Genome 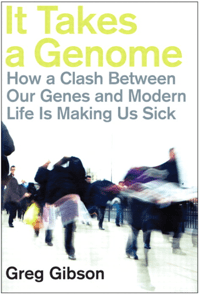 "How a Clash Between Our Genes and Modern Life Is Making Us Sick."

Freshly downloaded to my Kindle 2. Here's some of the descriptions and endorsements.

Human beings have astonishing genetic vulnerabilities. More than half of us will die from complex diseases that trace directly to those vulnerabilities, and the modern world we’ve created places us at unprecedented risk from them. In It Takes a Genome, Greg Gibson posits a revolutionary new hypothesis: Our genome is out of equilibrium, both with itself and its environment. Simply put, our genes aren’t coping well with modern culture. Our bodies were never designed to subsist on fat and sugary foods [Note: I take that to mean processed foods, not natural fats. -ed]; our immune systems weren’t designed for today’s clean, bland environments; our minds weren’t designed to process hard-edged, artificial electronic inputs from dawn ‘til midnight. And that’s why so many of us suffer from chronic diseases that barely touched our ancestors.

Gibson begins by revealing the stunningly complex ways in which multiple genes cooperate and interact to shape our bodies and influence our behaviors. Then, drawing on the very latest science, he explains the genetic “mismatches” that increasingly lead to cancer, diabetes, inflammatory and infectious diseases, AIDS, depression, and senility. He concludes with a look at the probable genetic variations in human psychology, sharing the evidence that traits like introversion and agreeableness are grounded in equally complex genetic interactions.

It Takes A Genome demolishes yesterday’s stale debates over “nature vs. nurture,” introducing a new view that is far more intriguing, and far closer to the truth.

“A compelling, witty, and reader-friendly explanation of how our genes, fashioned for living in the Stone Age, are not so well-suited to life in the Modern Age.”
— Sean B. Carroll, author of The Making of the Fittest and Remarkable Creatures

“It’s taken thirty years, but we finally have in Greg Gibson’s It Takes a Genome what is truly a biologist’s response to the single-gene focus of Richard Dawkin’s early classic The Selfish Gene. And what a response it is! In Gibson’s world, we see a genome as an integrated whole, making sense only when the constituent parts, the genes, are considered in their full genomic and environmental context. It is an engaging, fascinating, accessible, and ultimately deeply satisfying perspective that will enrich the way we all think about ourselves and how we got to be the way we are.”
— David B. Goldstein, Professor of Molecular Genetics, Duke University

“Gibson has captured the delicate balance between the excitement of the genomic revolution and the frustration that so much is yet to be learned about the genomics of disease. This book is an ideal guide through the complexities of recent environmental change and how this non-genetic process has interacted with human genomic variation to produce today’s landscape of important chronic diseases.”
— Marc Feldman, Professor of Biology, Stanford University

“Geneticist Gibson is a natural teacher. He brings a welcome balance to his descriptions of the roles of genes, the environment, and chance in the major human diseases.”
— Bruce Weir, Chair and Professor of Biostatistics, University of Washington

I can't wait to dig into it. That makes about five books at one time, now.