Fat is King. More particularly: saturated fat. Now, how do you get that? Well, you can eat a lot of fatty beef, chicken skin, and so on, but only about 30-40% or so is saturated (15% saturated from olive oil). Or, you can get it very efficiently by eating all that, but by also dipping, slathering and generally enjoying the hell out of your life with sauces. I'm an absolute fiend for sauces. Even, now, with grilled meats.

Gotta have a sauce. Mine are all home made, and they are almost all based on: coconut milk. It's more efficient in saturated fat delivery — far more so — than even heavy cream. Let's take a look; the average can of full-fat coconut milk being 14 ounces. Here's nutfacts for 8 ounces, a little more than half, which is an average amount I'd use to thicken or base a sauce for 2-4 people (unless it's a Thai curry, in which case I might use two full cans, four times the amount below — so go ahead and have your heart attack now): 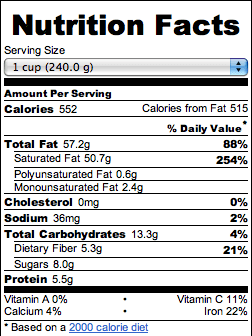 Holy shit, Batman! 88% of the damn thing is fat, and of those 57 grams in a cup, 51 grams, or 90%, is "ARTERY-CLOGGING SATURATED FAT!!!" Yep, God is trying to kill you, seeing as how coconut is a staple food for a number of (heart healthy) populations.

Here's a characteristic dish from a couple of mights ago which I'll call Indian / Thai / Polish. 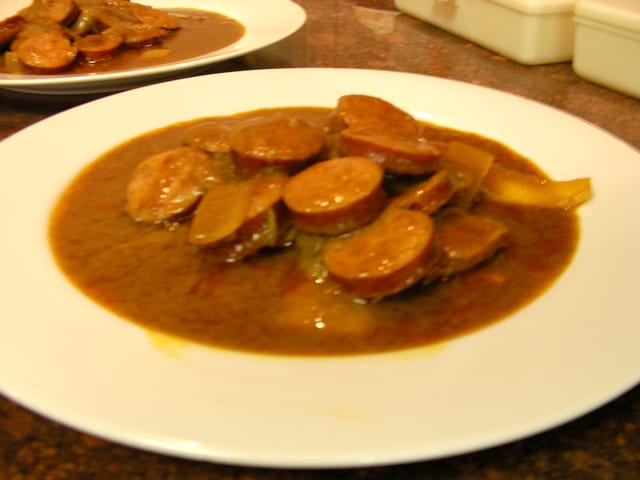 In all my time in Asia, it never escaped my attention — even in the 80s — that Thais generally have wonderful body composition and Indians generally have lousy body composition. Well, they both eat lots of hot curries. The difference? Indian curries are water based. Thai? Coconut milk based, not only making them way easier to prepare, as they require very little reduction for a nice thick sauce, but wonderfully creamy on the palette (though HOT!).

On the other hand, I generally like the complexity and variety of Indian curries over Thai curries. The solution? Use coconut milk in your Indian curries, and use whatever the hell meat you want. (The coconut milk) Doesn't change the flavor a lick, so far as I can tell, though I'm sure some would disagree. Fine. I'm fine and know what I'm doing. In fact: it's a wonderful discovery.

The other part is that I don't do nan, the Indian bread (amongst many others you can have) that goes along with most curries, in addition to the rice. I don't think Thais do that, at least not that I've seen. Don't get me wrong: love nan; I can eat a whole lot (prior to the nuclear heartburn I used to get every time — now none — regardless of how spicy).

I do often cook up a bit of Basmati or Jasmine rice. Two to three heaping tablespoons will do it. Eat it with a tablespoon (as the Thais do). This introduces sauce and a spot of rice (if you're adding a starch) to each bite.

I do this a lot, and more and more. By the way, that's an Indian lamb curry paste (they have a dozen different curries for everything) with some water (it called for 2 cups, but that was to simmer and braise the lamb — the polish is already cooked). To that I added probably half a can of coconut milk and a good teaspoon of cayenne to boost the heat several notches. There's uncured Polish and an Onion.

Save your leftovers and toss a couple of eggs on them in the morning. Seriously.