There's a local restaurant, Consuelo Mexican Bistro, where I believe I had chicken mole for the first time. The sauce was thick, brown, chocolaty and amazing. While I've never looked up a recipe until this morning (good luck finding something not loaded with flour), I figured I'd give a try at making something similar last evening.

Before leaving San Jose yesterday afternoon to head up to our cabin in the mountains with friends, I stopped at the store and secured a large, 3-pound rotisserie chicken (already "rotisseried"). I also took along one 14-oz can of coconut milk and a bar of Trader Joe's dark chocolate (70% coco).

You won't believe how easy this is, and, since the chicken is already cooked, quick. First, put your pot on medium heat with the entire can of coconut milk, about 1/2 cup water, and the whole chocolate bar broken up. As that's coming to a simmer, cut the chicken into pieces, taking care to keep the skin intact and connected to the bird. Place them on a cookie sheet, skin side up, under the low broiler on the center rack so you're not too close. The idea is to crisp the skin. It should take 6-8 minutes until the chicken is sizzling pretty nice. In the meantime, scoop out any chicken fat from the bottom of the rotisserie container and add to the sauce. Then add the chicken to the sauce, pack tightly so that it's covered in sauce completely (add a bit more water if you have to. Also, return any drippings from the cookie sheet into the pot.

Should take 15 minutes or less to come up with something like this: 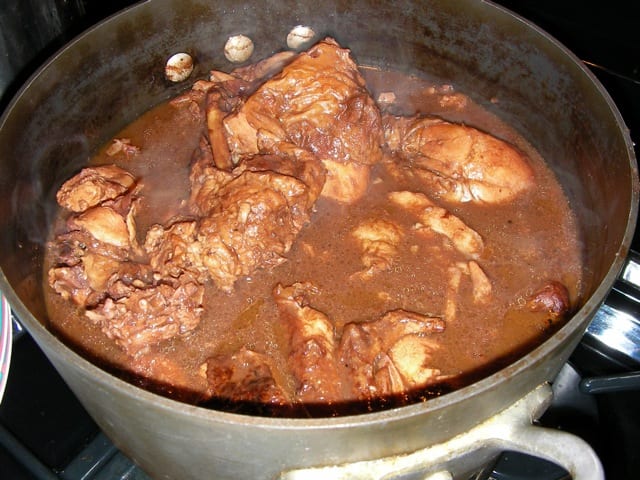 And here's the finished product, with basmati rice cooked with about a teaspoon of cinnamon. This is the second recent dish I've featured with rice, so while it may seem I'm eating a lot of it, I'm not; so I hope I'm not leading anyone astray. I think it's one of the more innocuous non-paleo foods, in moderation, and I'm pretty convinced it's better than potatoes. And let me tell you, the cinnamon rice and chocolate and creaminess of the coconut-milk sauce was just killer. My good friend Robert, a very lean gentleman of Korean descent — who is not a big eater and is a natural intermittent faster — pigged out unlike I've ever seen him do. 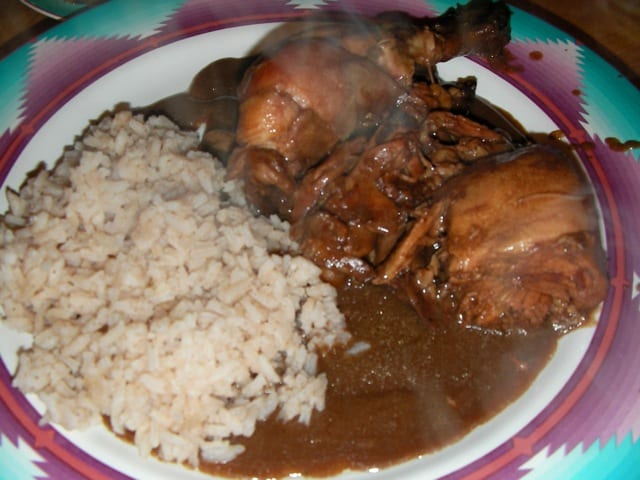 I heartily encourage everyone to give this a try.