Yesterday I tweeted that I was 24 hours into a fast and had yet to experience any hunger. How did that happen? Well, I can't be sure, due too many variables, but what's interesting is that I began the fast about 11 AM day before yesterday, and with only one meal instead of a breakfast & lunch. Eggs & bacon it was.

Then I decided to do something I've not done before. I did this high-volume workout at 4 PM, 5 hours into the fast. Then I did 6-7 minutes in the cold cold water. I had no problem with hunger before bed, slept for a good 6-7 hours, woke up refreshed and waited to get hungry. It just didn't happen. The plan was to head over to the gym when the hunger came, and do a cold-water plunge again, as I've used that before to rid myself of hunger. But, I was fixing a big braised pot roast for family guests and I needed to get that started 4 hours ahead of time. So, I never did the second dip and broke the fast without really being hungry at about the 27 hour mark, munching on some nuts as I was making preparations.

Here's what went down. 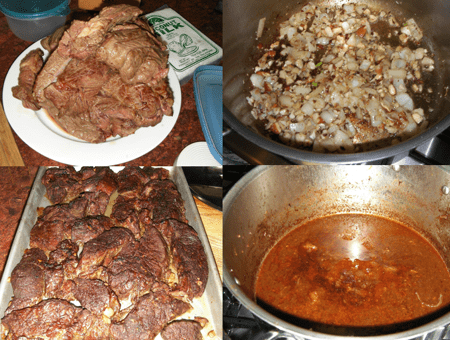 Clockwise from the top left, you've got the 6 lbs boneless chuck, browned on all sides (in leaf lard), then in the same pot I just added a bit more lard, a small yellow onion, a bit of pine nuts I had left, and a good handful of chopped raw Brazil nuts and almonds. Once that was well sautéed, I added in about 1 1/2 cup of my home made bone broth I had left, deglazed the pot, and added a half-handful each of frozen cranberries and blackberries.

Then I packed in the roast, and because it was such a good pack with 6 lbs (average recipe would be 4), even the small amount of liquid nearly covered the meat. In a normal braise, you usually get best results with your liquid to about half, then turn the meat every hour. In this case, I turned the meat halfway through the 3 1/2 hour cooking, covered, at 300 deg in the oven.

Continuing with the photos, you have the finished meat laid out on a cookie sheet where I placed it in the oven for warming as I boiled another onion, a few carrots, one large sweet potato, and one large parsnip in the broth, which you see at the bottom left. Took about 20 minutes or so for the veggies to get soft. Then I removed them with a slotted spoon to the serving dish.

I then dissolved 1 heaping teaspoon of brown sugar in a bit of water, dribbled it on the meat, and put it under the broiler for 2-3 minutes to glaze up. I also added two teaspoons of my Thai massaman curry paste to the broth — just enough to create mystery; but this also alleviates the need totally for any other spices (there's no salt, pepper, or any other spice in this).

The meat went into the serving dish with the veggies and the well-thickened broth got poured all over. The finish line: 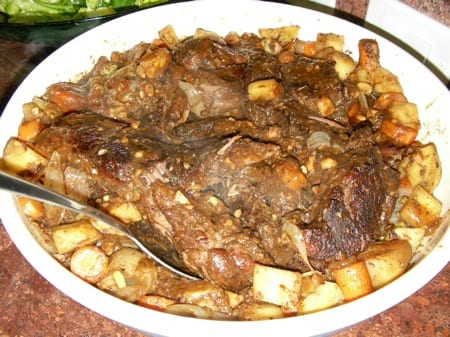 The meat was fall-apart fork tender, and the six of us present accounted for all but about a pound of leftovers. I think everyone had a couple of servings like this: 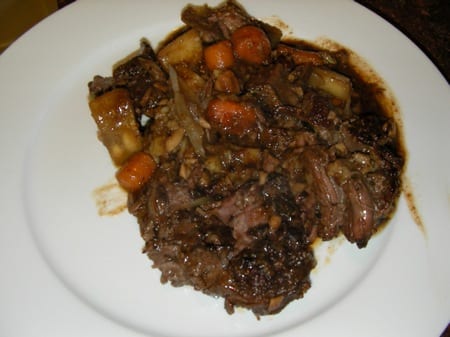 Next week I will do a post on the complete process of making the bone broths. It is pretty easy to do, just takes a couple of days with the work coming at the beginning and the end.