What if I told you that it was known worldwide in 1924 that common dental carries (cavities) could easily be cured without drilling, filling, or worse: extraction? But how could that be? Dentists make billions of dollars per year, worldwide, drilling, filling, extracting, rooting and all manner of other such things.

Oh, I know. It's one of those "natural remedy" things; probably something written up in the Farmer's Almanac of the time or tales passed along by Old Wives. That's gotta be it, eh?

Now, Stephan did a great write-up on this, including a layman's explanation of just how a cavity in a tooth remineralizes. So, I'm not going to steal his thunder. Here's just a preview.

Drs. Mellanby set out to see if they could use their dietary principles to cure tooth decay that was already established. They divided 62 children with cavities into three different diet groups for 6 months. Group 1 ate their normal diet plus oatmeal (rich in phytic acid). Group 2 ate their normal diet plus vitamin D. Group 3 ate a grain-free diet and took vitamin D. 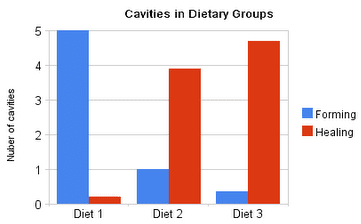 In group 1, oatmeal prevented healing and encouraged new cavities, presumably due to its ability to prevent mineral absorption. In group 2, simply adding vitamin D to the diet caused most cavities to heal and fewer to form. The most striking effect was in group 3, the group eating a grain-free diet plus vitamin D, in which nearly all cavities healed and very few new cavities developed. Grains are the main source of phytic acid in the modern diet, although we can't rule out the possibility that grains were promoting tooth decay through another mechanism as well.

Go read the whole interesting story, including others who were curing cavities in the 1920s.

On a personal note, for those who haven't heard this from me before: I had gum disease. I had two surgeries seven years ago, then regular cleanings, but was getting marginally worse again. Getting off grains not only stopped the progression almost immediately, but completely reversed my declining gums within months. However, I still had major plaque buildup problems. Supplementation with vitamin D and K2 (MK-4) has now completely solved that to the point where I really don't need to brush, anymore. A toothpick suffices and I only brush now and then for the cool minty feeling. I wake up every morning with smooth pearls in my mouth.

I am amazed daily at how ignorant we have allowed outselves to become, and I only don't mean in terms of a cure. How about dammed preventing them in the first place?

A friend of mine might call this an example of what he's dubbed: The Endarkenment. The more and more of this sort of thing I see — and I see it more and more — the more I see what he means.