I've been blogging about vitamin D for quite some time and it's always good to see the evidence piling up that it's a real health issue for many, if not most people. According to the D-Action project at Grassrootshealth, about 51% of people they've tested are below normal, which they consider to be above 40 ng/ml (I think you should be above 60, and I try to keep mine above 80). But, consider, these are the results of people who are concerned about their levels. I shudder to think what it must be for those unaware, using sunscreen and clothing to avoid sun exposure, and relying on fortified milk. 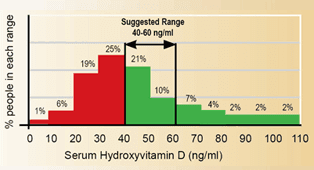 Another piece of the puzzle hit the newsstands, today.

A new study on nutrition and health shows vitamin D can significantly reduce the risk of several types of cancer.

William B. Grant, director of the Sunlight, Nutrition and Health Research Center in San Francisco, reviewed and summarized the ecological studies of solar ultraviolet B (UVB), vitamin D and cancer since 2000. The strongest associations between vitamin D from the sun and cancer were found with colon and breast cancers, but links have also been found with non-Hodgkin lymphoma, ovarian cancer and kidney cancer.

The findings provide strong evidence that vitamin D status plays an important role in controlling the outcome of cancer. Grant believes the support for UVB-vitamin D-cancer theory is scientifically strong enough to warrant use of vitamin D as a component of treatment in cancer prevention.

Back to Grasstrootshealth, there's more. This is a 5-minute video interview of Cedric Garland, Dr. P.H., who has just published a paper in the Annals of Epidemiology essentially showing the same thing. Unfortunately, there's no abstract for the paper, and no ability to purchase as it's for print subscribers only, which seems like the dumbest thing in the world, but whatever…

I have featured the work of Dr. Garland and others previously, the most notable being these three posts on the epidemiology of cancer and type 1 diabetes, with lots of charts and figures, so be sure to review those if you haven't seen them before.

Vitamin D Deficiency and All Cancer