Tom Naughton is going to be placing some of his additional Fat Head footage up on YouTube. Here’s the first installment, which features Sally Fallon of the Weston A Price Foundation, biochemist Mary Enig, PhD, and Dr. Michael Eades, MD. Listen as they expose the Big Corporation lies Proctor & Gamble and others engaged in in the early 1900s to demonize relatively expensive but healthful natural fats like lard, butter, and coconut oil in favor of "frankenfats" — chemically extracted, then deodorized, hydrogenated, interesterified, and so on.

Crisco, for example, is a consequence of electrification and light bulbs. For, you see, Crisco was originally intended to replace the expensive animals fats used to make…candles. From Wikipedia:

When William Procter and James Gamble started the company Procter & Gamble, they hired chemist Edwin C. Kayser and developed the process to hydrogenate cottonseed oil, which ensures the shortening remains solid at normal storage temperatures. The initial purpose was to create a cheaper substance to make candles than the expensive animal fats in use at the time. Electricity began to diminish the candle market, and since the product looked like lard, they began selling it as a food. This product became known as Crisco, with the name deriving from the initial sounds of the expression "crystallized cottonseed oil".

I suppose the "logic" must have gone something like this: "well, since we can use food (animal fat) to make candles, let’s just feed people candles!"

Then, they marketed the hell out of it by giving away free cookbooks, every recipe calling for Crisco. They also dishonestly, manipulatively, murderously demonized natural, real food, scaring people away from it in order to replace it with a money-making killer. While other factors and variables surly contribute, it’s just too much of a coincidence that cardiovascular disease really took off with the advent of frankenoil, Crisco being among them. [Added later: see this from Stephan.] 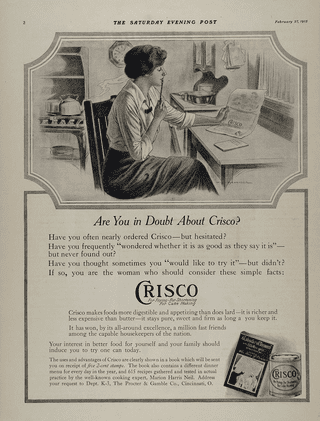 There’s a lot of talk of "Tea Parties," these days, in which I have not the slightest interest. I might could get interested in Pee Parties, however — wherein certain graves are urinated upon by righteous crowds seeing to some justice, if only in symbolic form.

Might I suggest beginning with William Procter and James Gamble?