I'm just about to get going on assembling stuff to make lasagna, tonight. But of course, it's going to be noodle-less, based instead on something I've had in mind for quite a while. Also, it will have a very unique meat ingredient.

In the meantime, here's last Saturday's fair for friends & family. It was braised short ribs again, but different from my last go-round. Here's stage one. 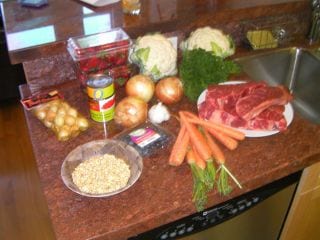 That's most of the stuff. In this case, I actually began with a recipe and made some changes. First, I used 4.5 pounds of meat and so reduced quantities accordingly. I also further cut down the amount of tomato to the one 14 oz can. In addition, I cut back on the wine and increased the amount of beef broth somewhat, using my own broth, of course. I also added in about a handful of blueberries and, as well as pine nuts.

In terms of procedure, I did this in the oven, about 4 hours at 300F and I only put the carrots and pearl onion in for the last hour. 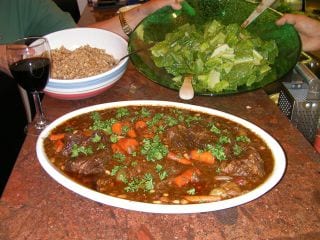 Alongside is a stir fry of finely chopped cauliflower, done in lots of butter and some almond meal. You should be able to click on the one below for the full size version. 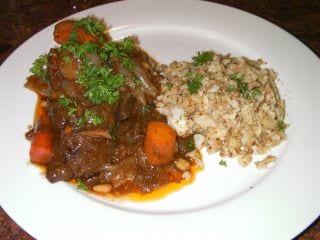 Later on, our friend robert made up this nice dessert plate for the four of us who were playing cards. The chocolate was 70% cacao. 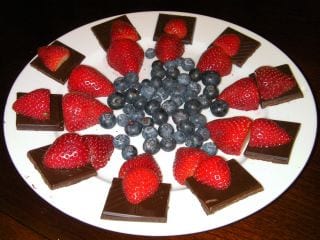