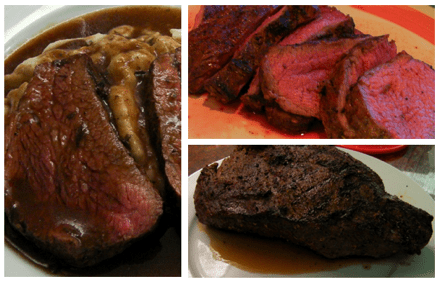 I finally got a grill that allows me very good temperature control, such that I can do the low & slow to achieve rare & medium rare roasts from edge to edge and not just the very center. It's a Char-Broil Infrared Gas Grill. Highly recommended. Essentially, I was able to easily create an indirect heating environment of only about 250 degrees. I used a temperature probe as well to know internal temperature. Then, once the meat was at 115 I used direct heat on high and turned the meat until 125. Then let rest. If you have juice draining after a couple of minutes, you know it's enough to make the fat juicy. Of course, the juice was reintroduced to the sauce.

To accompany the roast was a celery root purée which I've been dying to make correctly for about a dozen years (click the image for the full size). Tried a couple of times with bad results. You must have a full-fledged food processor. I'll not even go into the various ways I've tried. You must have a food processor to do it right.

Here's the recipe that I used. The changes I made were that I used 2 cups of whole milk (organic pasteurized is fine; you're gonna kill the milk anyway) and a cup of organic heavy cream mixed with the water for cooking. I also used a full stick of organic butter, along with 1/2 cup of cream (melted together in a saucepan) for the finish in the food processor. It came out smooth and really wonderful. Yep, there's one small russet to go with the 2-3 pounds of celery root. For 6-8 servings, it's a pretty minimal amount of glucose.

The sauce was a reduction of my standard bone stock and I didn't do much with it other than add a bit of red wine, and a pinch each of sage & rosemary. Because I was concerned with having enough for everyone, I thickened with about a tsp of potato flour right at the end instead of reducing more. 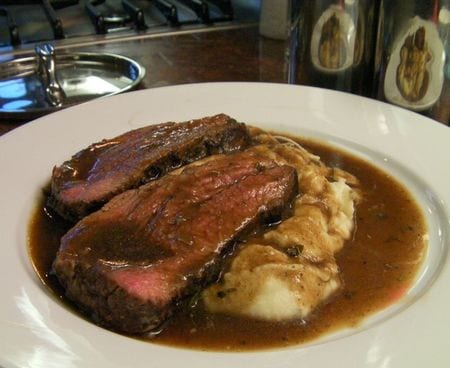 Our neighbor prepared a wonderful green salad with onions, real bacon bits, and dressed lightly with olive oil and fresh lime. I was remiss in not getting a photo, but, I did eat an entire plate of it after the above had been finished off.