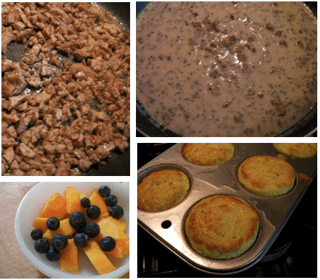 This is one I came up with concurrently while thinking of last night's meal. I was actually a late comer to the love of country buttermilk biscuits & gravy, but fall hard I did. "Twas a time when, all the local cafes I frequented existed in a mental hierarchy based exclusively on my judgment of the quality of their country gravy.

But since going toward paleo two years ago, getting closer 18 months ago, and finding my stride and expertise now, it has been a rare cheat treat that I've maybe fixed only 3-4 times, all right up here in…the open country.

Well, I'm here to say that the gravy problem was easily solved, so, no more need of flour and starches and other nefarious ingredients. Seriously: coconut milk, country sausage, and whatever spices you like. Simmer and reduce gently. I used just a couple dashes each of chives, rosemary, parsley, and savory. I also added a quarter cup of heavy cream and 1/4 tsp of Kitchen Bouquet, just for color. Regular readers know that I do a lot of coconut milk curries (just use search to find them). In this case, fortunately, there is not a hint of coconut flavor. It works excellently.

Biscuits are a much harder problem. I was very limited in choices, here. No coconut flour at the local market, so, for six cupcakes, I used four jumbo eggs, 4 tbsp coconut milk, 1/2 cup of buttermilk, and 4 tbsp cottage cheese. (Note: that was a full can of coconut milk, and the remainder went with the 1/2 pound of sausage.)

I greased the cupcake pan with bacon drippings; and by the way, if you use bacon drippings, then always cook your bacon on very low heat. I'm patient, and my bacon never smokes, and so my drippings are always pretty pristine for later use. Also, the sausage was too lean, and so 2 tbsp of bacon dripping went in there, too. 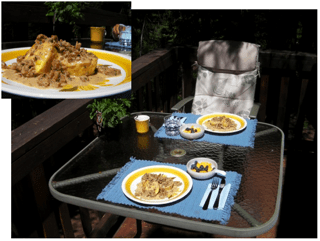 350 degrees, and I initially tried 15 minutes, but a knife poke revealed way too much moisture. So, I kicked it up to 400 for another 10 minutes, which did the trick. I rested for 5 minutes in the tray, and then another 5 minutes turned over on the counter, letting moisture steam off. In the end, about as firm as quiche.

The biscuits are the weak link, and I'm anxious to try various things when I get back home, such as the cauliflower pizza crust, coconut flour, or some combination. For those who like country gravy on their scrambled eggs, this approximated that. If I can get the biscuits up to the texture I'd like, then I'll go the the trouble. Otherwise, I'll probably just do plain omelets with the country gravy poured on top. 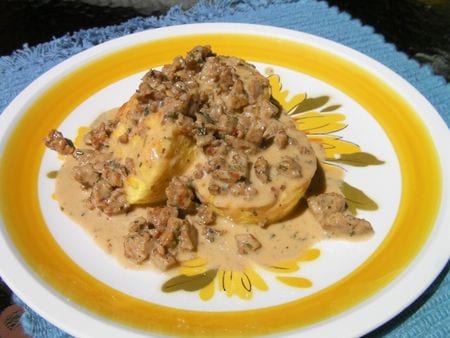