I mentioned in the epic-comment post about my carb binge that I’ve been trying to get more protein, and have felt a heightened sense of well being for it (and just for clarification, since it was apparently unclear — for which I will take blame: I was not in any sense doing a Lyle McDonald "refeed").

One thing you hear a lot from those on paleo is that they feel so good. For me, that had begun to wane, a bit. It’s not that I felt bad, just that I wasn’t typically feeling so damn good all the time. This has been for a few months and I’d just chalked it up to things wearing off and getting back to normal. Then Jimmy’s Julia Ross interview got me to thinking. It used to be that I would have my fasts and usually always eat a huge steak or some other form of lots of meat, and I’d graze a lot in the evening and don’t do that much, anymore. In the last few months, I had just been spontaneously eating less, very often not finishing a meal. So, maybe there’s a double edged sword. If we eat naturally, i.e., as an H-G, then perhaps there’s a downside for modern man — a consequence of food at your fingertips. For an H-G, they’re going to feed at every opportunity; for, without good systems for storage, they never know where or when the next meal is coming from.

I found that to the extent I wasn’t really that hungry, I’d fast in-between my fasts. That is, knowing I could source food whenever, it got to be increasingly: maybe later. The imperative to eat at every opportunity is missing in modern life (for a non carb-adict), so, perhaps it is that once you really get solid, you actually have to pay attention to eating even when not particularly hungry.

Hunger has always been the key, to me, but I now find myself wondering if, on the other side of this deal, we need to be mindful of being even a little hungry, which is to say: I don’t have to eat, but I could. I have also found, through experimentation, that even if slightly hungry, once I begin to eat, I can actually really pound it down. It’s like eating something turns a small hunger into a big appetite.

Here’s a couple of examples of high intake breakfasts of late; the second, not so much, but it was heavy in fat.

First up, a round of artisan cured meats & salami from the farmer’s market (from Germany & Spain), some leftover roasted chicken, fresh sauerkraut, and some sage cheese. 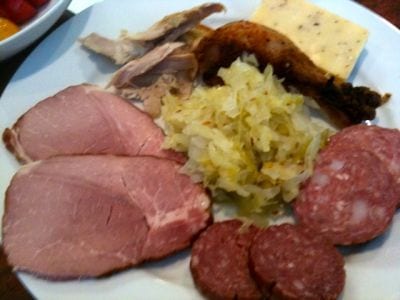 In addition, I had this grape tomato salad, tosses with EVOO, a dash of balsamic, and some dried basil & thyme. 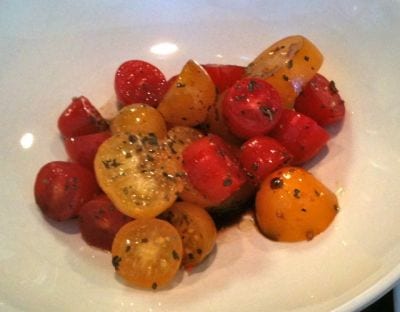 Next up, this morning — and yea, I need to get some white plate up here at the cabin. It was poached eggs on cottage cheese, homemade Hollandaise sauce (paleo friendly, easy, recipe right here), some artisan salami, grape tomatoes, and a bit of fruit that’s not pictured. 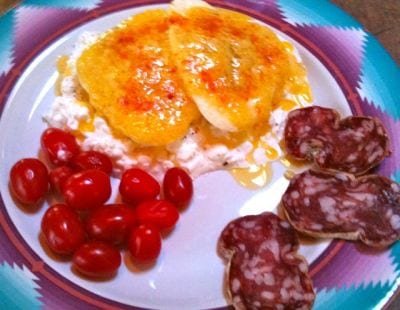 Admittedly, the Hollandaise doesn’t look great, but it did! What happened was that I did just what the recipe cautioned about and let it get to hot, so it curdled, a bit. Trust me: it was the most beautiful creamy before this. Oh, well, the taste was the same.

Not particularly high protein, but decent, and lots of fat. The Hollandaise has 3 egg yolks and an entire cube of butter. I had most of it, Bea some, and there was very little let over.

And here I sit, hours later, and hunger is the last thing on my mind. But I’m gonna eat a big steak tonight, anyway.