Those (few) who used to follow my political blogging know that it was often heavily anti-religious (to the consternation of many of my political-philosophy soul-mates). Though still steadfastly a non-believer — "I don't believe in Zeus, or any of the Gods that came after" – Richard Dawkins — my attitude about the whole thing has changed stylistically. Now, I essentially put it in the same general boat as agriculture, i.e., agriculture making things like Big Statism, Big Corporatism, and Big Religion (all steadfast bedfellows — or honor-bound thieves, take your pick) possible. Decentralized religion — call it tribal myth — lacks the power to harm lots of people, as Big western religions used to do (at least as antagonists) — but Islam still does.

So what does this have to do with health & fitness, you ask? Glad you asked.

Well, one of the blogs I've been linking to in my Quick Hits posts is that of Don Matesz (husband of and co-author with Chef Rachel).

I'm woefully behind in my reading, but finally got to Don's post pointing to this one from a very interesting person, which I'll get into in a moment.

That post is about the whole Muslim custom of covering women in ridiculous looking attire from head to foot (Want a laugh from my past blogging antics? See here.) causing osteomalacia and other serious health issues linked to vitamin D deficiency (and: connect the dots).

These people, to be generous, are out of touch with reality! Bad things happen when that happens, and the usual result is that people get harmed, many killed. Other than that, there's too many delusions to go around and I'm far beyond trying to point them all out.

Of course, they're just Muslims, and we're "enlightened" Christians, Jews, and general derivatives of same, right? Well, perhaps, and I will certainly stipulate to the obvious fact that that the two latter are far more benign to the health of humanity in general than the former.

I just can't understand the necessity, the imperative. Fear? I think that has a lot to do with it. But I'll move along. More than being a rare (I assure you) anti-religion post, I would just suggest to you that just as bizarre as it seemed at first to question the ingestion of grains and sugar, did you ever stop to realize that modern religions are even newer to our evolution?

Which brings me to the "interesting person" I referenced, above. Acharya S., AKA D. M. Murdock. Here's her main site (which is going to kick off audio — a video — so take note). She's an archeologist, and, while I read all of the "new atheist" books out the last coupla years (Dennett, Dawkins, Harris, Hitchens), I'm really more impressed by the archeological detection that demonstrates the very same theme over eons and eons (how about 5,000 BC?). What theme? Well, you'll have to check into that yourself.

She has a few videos (books you can find at that main site link), which I'll list shortest to longest.

It just helps. That's all.

Answer: They all cause a hell of a lot of them. But you'll need to click that link to find out the surprising winner. How many do meat, fat, and vegetables cause?Zero.

Now, go get your kids off that crap.

But, hey, "they're 'just' teeth," right? Well, sure, I guess; but I prefer to think of it as adverse mineral metabolism. You think it only applies to teeth? Ever heard of osteoporosis?

Ever heard of calcification of the arteries?

More: my posts on vitamin K2.

Wow, is this ever eye opening, in The New York Times:

I don't think she gets even one thing correct, and most of the commenters are equally misled. One gets it dead right, however.

…Your readers are told to eat energy bars (read cookies with vitamins) which cause your insulin to rise, causing a hormonal response WHICH SHUTS OFF FAT BURNING. And these readers wonder why they are doing all this exercise and getting no results.

I regularly exercise in a fasted state. I then wait an hour to benefit from my body’s release of growth hormone after exercise which help my muscle grow. Low insulin levels are my partner in keeping a normal weight.

Little wonder that America and the world is fat and getting fatter, even while exercising more.

I frequently get emails from fairly new paleo / primal / low-carb practitioners worried about their newly obtained lipid panel that supposedly shows a degradation, particularly in the form of elevated total C, and/or elevated LDL.

I've lost 25 pounds, I feel great, I sleep wonderfully, my blood pressure is way down and I have been able to drop meds for seasonal allergies…"

Now, given the above, realize that there are tons of doctors who will berate, caution, cajole their patients for these behavioral changes, simply on the basis of a lab number — and in particular — totally disregarding the patient's own feelings of enhanced health and well being.

So, I need to put together a single static page that can be frequently updated as more and more resources come out about the great cholesterol con. Of course, I'll be listing all my past posts on the topic, and I am aware of a number of posts from other bloggers — and some of you have already sent me lots of stuff (Thanks, Ricardo C.).

However, I know there's a lot out there so can I ask fr a bit of help? Please drop in the comments or email me your favorites: books, websites, blogs, specific articles or posts, studies, anecdotes, or whatever you think might be of value. I'll compile.

This is dinner, two days in a row. Saturday at the parent's-in-law in Vista, CA, I did a prime rib low & slow, along with a slow beef broth reduction containing fresh garlic, shallot, and jalapeno pepper, strained at the end. 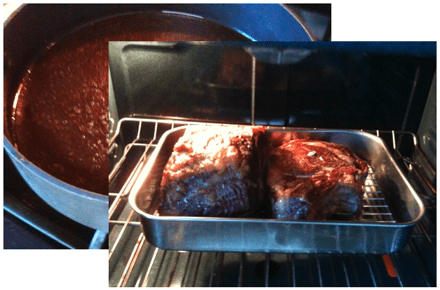 My sister-in-law prepared a nice salad with toasted sunflower seeds. I dressed it with EVOO and fresh lemon. 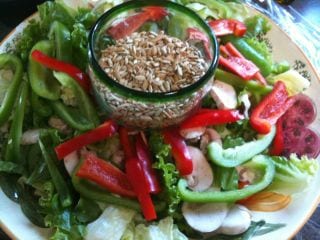 Rounding out the meal was chopped cauliflower sautéed in coconut oil, which was a big hit. 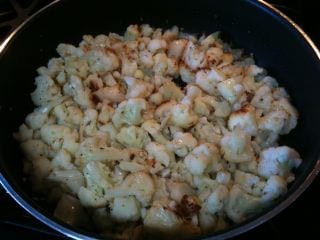 Returning home in San Jose yesterday at 1pm, I decided later in the afternoon to cook dinner for our friends who were some hours behind us in their own drive up I-5 from LA.

I had a tri-tip in the freezer, so that made it an easy choice. Took the bike down to the local market for some cauliflower, a parsnip, garlic, shallot & jalapeno pepper. Again, a slow beef broth reduction with the shallot, garlic and pepper sautéed in leaf lard. 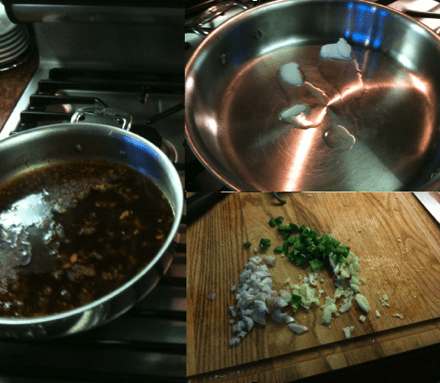 Rounding it out was a cauliflower and parsnip purée. Simply boil 'em up in proportions you like, strain, and pop in the food processor with butter & cream to taste. Didn't get a photo but I will next time. 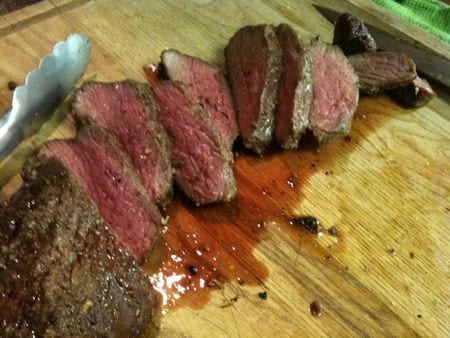