Real Results to Keep You Motivated

It’s happening all over. People getting lean almost effortlessly, devoid of gripping hunger; in short, enjoying themselves, feeling better about themselves, and looking better and better.

Frankly, it’s difficult for me to imagine these results being out of reach for anyone who really wants them. It takes such a short time to reach the "point of no return." For those having difficulties staying on the paleo path, keep in mind that virtually everyone who sticks with it for those first few crucial weeks actually comes to the point where it would be just as impossible to go back to the old ways, as it was impossible to achieve any meaningful and lasting results on all but a few other life ways out there (those that share critical elements with paleo, Primal, EvFit).

So, let’s jump right in. First up is my dad. He’s down now more than 30 pounds and at 71, is looking better and better. Here’s a funny picture from earlier in the week. Dad was in town and called late in the afternoon about stopping by for a visit. After a while, we went over to the pub for some dinner while Bea and some girlfriends were having their own dinner and card night. When dad & I got back, everyone started laughing and this picture got snapped. We were completely unaware that we were dressed almost identically. 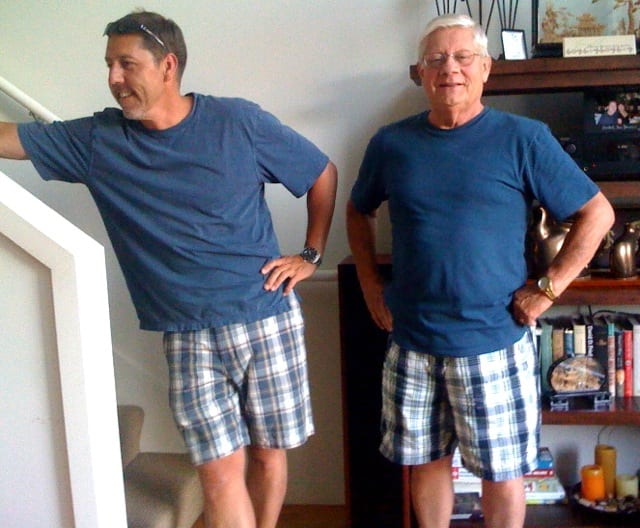 Dad sent this out in an email to family a few weeks back:

One side effect of loosing all this weight was reducing the size of shirts and pants I wear, not to mention belts. I did punch another hole in one belt, because I just bought this one less than a year ago. Used to wear extra large shirts, now I am down to medium (30 years since I’ve worn medium shirts). Pant size from 38 to 34. Bought 2 pairs of 36 about a month ago, and with no belts I can jiggle them right off of me, so now down to 34. That takes care of the summer stuff, but soon I’ll have to think about buying all the clothes for the colder season.

And, of course, I’ve highlighted mom a couple of times, and she’s still on track.

Next up, a former sister-in-law who has always remained in good contact with the family and also does a great job with my two nephews, Timothy and Jamison. Renee, who bought Mark’s Primal Blueprint on my recommendation and read it in a day or two reports:

Just thought I would give you a quick update on my Primal way of life. I started at 213. Wow, I was huge and now I am at 195. It has taken a few months but I feel a lot better about myself and my first goal is 180. I have already gone from a size 16/18 to a size 14. Thanks for all your blogs or posts or whatever you want  to call them.

Good for Renee. At this point, she’s probably already past the point of no return to the old ways.

Here’s another who’s well past the point; my friend and newly minted PhD, Diana Hsieh, who I previously profiled here. Go take a look at her photo progress there, and now check out her even greater progress in this recent shot of her and hubby Paul, an MD. 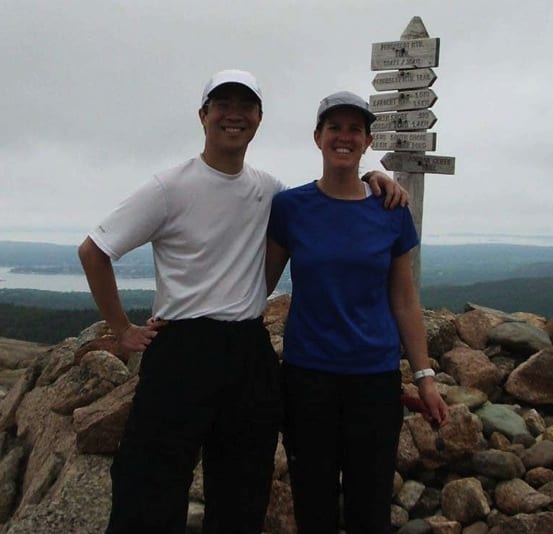 Diana has just posted about her first year of experience in the Paleo way.

I did not expect myself to stick so well to eating paleo, but I’ve found that I don’t miss the foods I’ve given up. I enjoy eating far more than ever before. Every meal is a wonderful opportunity to eat something incredibly delicious and satisfying. Plus, I’m no longer entranced by the thought of waffles or bread or pasta; I’d much rather eat bacon and eggs and brussel sprouts. Ordinary desserts are cloying sweet to me, and I often feel seriously unpleasant cravings for MOREMOREMOREMORE after indulging in a bite or two. By forgoing sweets as a matter of standard policy, I’m no longer beholden to the cookies in the pantry, as I used to be. Also, I find that preparing paleo foods has simplified my cooking. I spend less time cooking and shopping than before, and I waste less food too.

I’ve lost about 18 pounds, while also gaining muscle from short, intense weight training sessions. That’s a huge shift for me. Before, I was gaining three to five pounds per year eating the recommended low-fat, low-calorie, lots-o-grains diet while doing tons of long, boring cardio workouts. That’s all changed.

Then, there’s this comment from reader Valda Redfern in the UK.

I tried Atkins in 2000 and although I did lose about 20lb, I fell off the wagon and regained most of it. I think my problems were a) obsessing about the number of grams of carbohydrate I could get away with (how many slices of toast, how much pasta, how much pie, etc.) instead of concentrating on getting enough good quality nutrients; and b) not fully believing Atkins’s argument. About three years ago I started another attempt to lose weight, initially aiming simply to eat less. Because I wasn’t willing to cut out fats, though, I drifted into to a low-carb regime. All the reading I’ve done since then, on blogs like this one (thanks, Richard), has helped me adopt an enjoyable and convenient diet that has improved my health and enabled me to lose 35lb. I eliminated gluten-rich grains from my diet six months ago and don’t miss them at all, but I will occasionally snarf down favourite desserts when eating out (I never waste creme caramel opportunities).

You see, she drifted into a principled approach rather than the typical Atkins carb-counting approach. The principled approach is simply to eat real food. And, as she demonstrates, you don’t have to be a complete fundamentalist about this. But you’ll usually find that the big cheats come less and less. For me, it’s often the case that just a little bite is plenty.