So we went to a concert Friday night — Dave Mason, and then The Moody Blues. Hell yea! Because of the time frame in which we arrived in Arnold, CA, then had to leave for the show, no time to get dinner (and who wants to fast at a concert???). So, I quickly decided this would be a cheat. Then, I decided to make it an experiment in massive (for me) carb loading.

I’ll give you the background, and it’s going to be a bit long and moderately extensive, OK? …So here goes. My favorite driving activity these days is to catch up on jimmy moore’s podcasts. I’m going to get to why Jimmy got me to carb binge, later; but, first, let me divert you (again: many diversions here) for a minute. Number one, if you’re not taking advantage of Jimmy’s gargantuan efforts in his podcast shows, you are missing out on a lot of the very best — if only for its more total human experience: it’s people talking, discussing, which is quite different, perhaps superior in terms of our natural ability to take in, comprehend, and enjoy — far more than just visual input from reading a blog post.

Jimmy: your podcasts are unequalled in terms of a whole experience and high accessibility. They’re entertaining, and eminently valuable — and you have my (and my wife’s) sincere thanks. ‘Takes a lot to get me off of whatever classic rock station I might be able to find along my various ways, but you manage to do it very often. Thank you, Sir, and thank you especially for the quality of guests you are able to command, which, as you probably know, is the biggest part of it. I’m sure you have dozens of interview requests you’d never subject your listeners to. Easily, 80-90% of your podcasts are ones I listen and integrate in full, and some I listen to twice.

So, I would admonish all reader to check these out. Here’s the place, and you can access in different ways. Producing these shows is a lot of work, so I would suggest that if you listen to them and find value in them, as do I, then please consider donating to the effort.

On this particular trip I decided to finally listen to Jimmy’s interview with Lyle McDonald. Here’s the write-up on Jimmy’s blog. Well, I must say that I was highly impressed with this interview in terms of Lyle’s obvious good preparation for it, and also for the utmost respect he showed Jimmy; which, if you’ve ever seen Lyle in comments on his blog or posts in his forum…well, let’s just say I wasn’t expecting this, and particularly so when the topic turned to “metabolic advantage” of very low carbohydrate diets. Lyle was very conciliatory and explained his position quite well.

Alright, so that’s the first part of the setup. Next, one of Lyle’s books is The Rapid Fat Loss Handbook, which I read, tried, and blogged about here, and here. In total, I stayed on it less than a week. I just could not take the blandness of huge amounts of lean protein. But, I’m convinced the diet will shed fat rapidly in the short term. One thing Lyle talked about — both in the book and in the podcast — is episodic carb bingeing to sort of reset metabolism, notch up thyroid function, and capture some other benefits.

So, this was my excuse for doing what I did Friday night: yep, I’m blamin’ it all on Lyle and Jimmy. Gee, thanks, guys.

It started out reasonably enough. 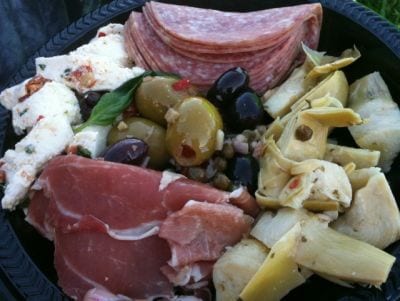 I also had a draft beer, and this plate came with three slices of bread. Bea & I split the whole deal, but I probably had the lion’s share. Then I got my crazy idea. What would it be like to go wild on carbs? So, following this, I had none other than a huge tri-tip sandwich (bread too), a corn dog, and then another beer.

Actually, I felt fine for the duration of the concert, and didn’t even get drowsy. Got home around 11:30 pm, walked the pups, then began feeling really tired ’round midnight and hit the sack. But first, I began getting this tremendous craving for water. Downed two large glasses, then went off to bed. Fell asleep immediately, but then woke up two hours later, 2:00 am or so, thirsty as hell, and with nuclear heartburn as a bonus. It was so bad that I had to resort to baking soda. More water. Went back off to bed, then laid there, tossing & turning, until around 5:30 am, getting up at least three or four more times — to drink more water. Then, the eventual other half of the unpleasantness came, of which I’ll spare you the details…

Finally I got to sleep again, sometime before 6:00 am, and was able to get a decent two hours. Needless to say, I dragged ass all day, yesterday. Went down to breakfast at a local place around 11:00 am, with the intention of taking in an enormous protein load to get myself functioning again. I was screaming hungry, and still thirsty. It was that now unfamiliar, gnawing, nauseating hunger that all carb addicts know so well. I ate three eggs, four sausages, three strips of bacon, a huge mound of cottage cheese, and a few slices of tomato.

Now we’re talking! I began feeling better almost immediately, and continued to feel better — though tired — throughout the day. Now, here I sit this morning in full recovery, not hungry or thirsty a bit. On reflection, I’m wondering if the unending thirst was a function of glycogen storage from the carbs. As we all know, each gram of stored glycogen requires 2-3 times that in water retention. Can anyone speculate on that point?

In all, it was a good experience that I’d actually recommend from time to time for those already on a solid paleo path. It will definitely solidify your approach to a paleo-like lifestyle. I won’t be doing this again anytime soon.

Finally, on the subject of carb addiction, here is another great podcast from Jimmy: his interview with Julia Ross. “Carbohydrates aren’t food, they’re addictive drugs,” says Julia. She has very high success using particular amino acid supplements (protein) to diminish and eventually rid people of cravings for drugs, alcohol, and…carbs. It’s quite an amazing story. I, for one, have been experimenting with eating way more protein the last week or so (she says you can accomplish what her supplementation does by really loading up on the protein). Other than my foray into carb hell on Friday night, I have noticed an increasing sense of well being by eating two very protein intense meals per day, nothing in-between, and virtually no nighttime grazing. Check it out for yourself.

Any comments of shared experiences with carb binges?