This is a prelude to a post on why I now think you should consider incorporating at least some measure of grassfed meats into your paleo eating lifestyle. This is where I’ll get into the issues of sustainability and cost. This, of course, comes on the heels of revelations in seeing the documentary film Food, Inc., which I reviewed extensively. On the same day I saw that film, I went to a local farmers’ market and secured some grassfed meats, beef & lamb.

Here’s the report on how I prepared both, how preparation turned out to be different from grain-finished & fattened meats, and the extent to which we enjoyed them more or less than what you get in your local supermarket. 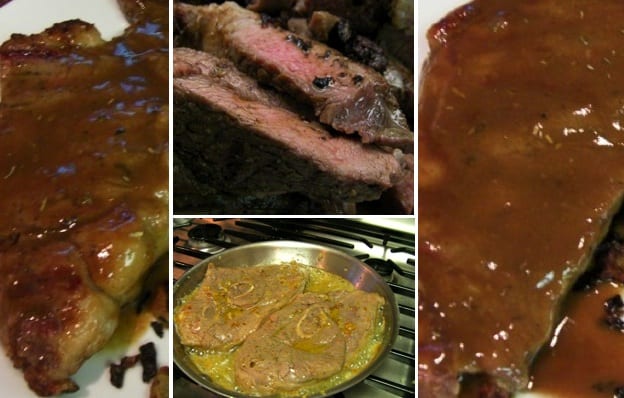 The first one we prepared was the lamb, and those two leg steaks fed four people, accompanied by a green salad with olive oil and fresh lemon.

These were done on the grill, both burners on full high with a good preheat time. While preheating, I put a large amount of butter in a skillet and crushed and then chopped 3-4 large cloves of garlic. I then let the garlic toast in the butter a bit, then I browned the lamb steaks, about a minute or so each side. Then they went off to the grilling and I turned down the heat on the skillet. I then actually grilled them longer than I expected, but I use the feel of the give in the meat to judge doneness and I got a bit worried because it had a lot of give (more rare) far longer then I had expected. Finally, it was done, and then they went right back into the butter and garlic for a quick dipping, then set aside to rest. 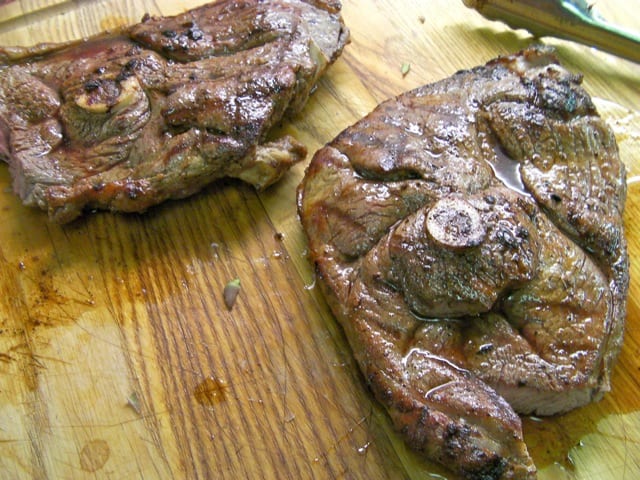 And finally, here’s how we chose to serve it up. 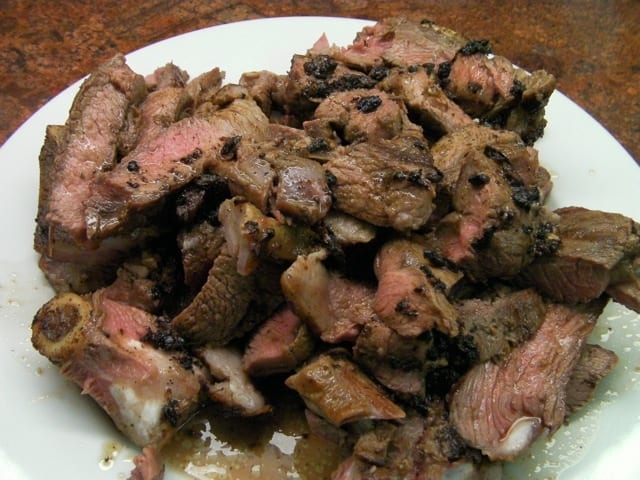 I think I speak for everyone present when I say it was fantastic, and for a leg (which I have usually had in the form of a roast), the best leg ever. It came out a nice medium rare and I was surprised it did not overcook.

It tuns out that this must be a characteristic of grassfed and finished meats, because I experienced exactly the same thing with the ribeye steaks, which I also grilled, and which also cooked far longer than I was expecting, but came out to perfect medium rare.  I speculate that the higher intra-tissue fat of grain fed meats heats up faster and hotter than the lean tissue, aiding in a much faster cooking. Unfortunately, I did not get a shot of the inside. It was devoured too quickly. 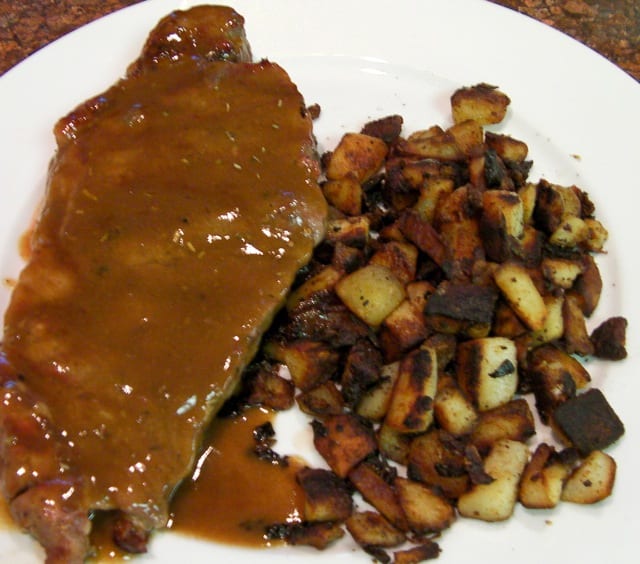 The reduction was the very last of my homemade beef bone stock, and with just a tiny dash of dried rosemary. I’m going to have to get going on another batch.

The most surprising thing to me is that I had always assumed I’d give up flavor and tenderness in exchange for 2-3 times the cost. This turned out to be untrue, as both of these preparations beat grain fed in just about every way I could think of:

So, within a day, maybe two, I’ll have a post up dealing with the other issues surrounding grassfed meats, namely: health, sustainability, cost, availability.