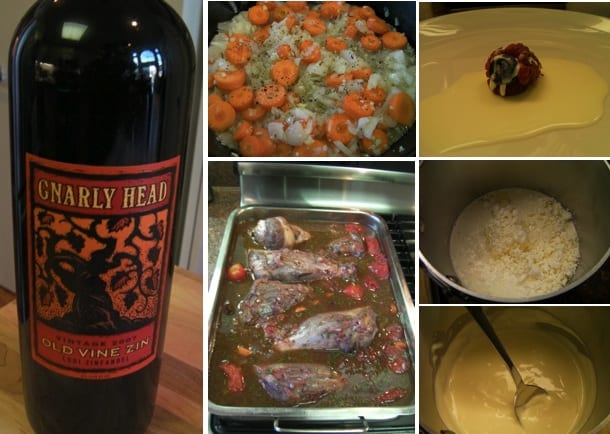 Maybe, just maybe, the most satisfying dish I’ve ever made. As someone who cooks a great deal — for other people being a huge part of that — I am often confronted with a serious question: was it worth it? Often times, in spite of the tastiness of a dish, it’s hard to answer that in the affirmative. Although, I’d never give it up. It’s a weird — and enjoyable — "conflict."

This time, however, everything was on my side. I’ve never done braised lamb shanks — or any animal shanks in any way whatsoever, in spite of it being a restaurant favorite of mine —  and this was on my mind for a couple of days. Knew we were having guests and that’s what I set my mind to. The fore-thinking is, to me, the best part of the whole deal. Anticipation is a great value. Think grand, envision it with patience, then accomplish it, and  finally, relish and even wallow, in your own pride. Don’t worry: if you’re made of the right stuff and didn’t get it right, you won’t be proud. See, your own selfish pride is really the end goal. Is for me, anyway. 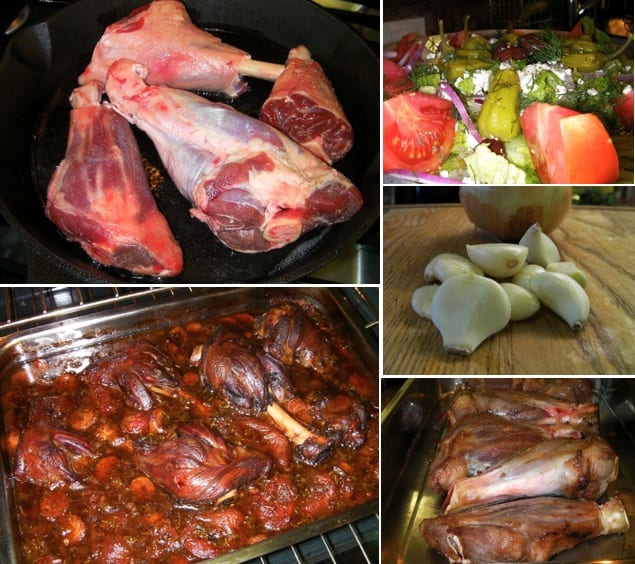 So, I looked at a whole bunch of recipes and ended up setting on the top Google ht for its utter simplicity. Lamb is a strongly flavored meat. If cooked slowly and it’s quality lamb, why go out of your way to hide its natural flavor.

So, I chose this one and, I. am. so. glad. I. did. I’ll likely play with it in the future, but there’s no need messing with this. In looking at numerous other recipes, I was persuaded to do two things differently, one being in terms of ingredients and the other, method. I added one and a half sticks of cinnamon to the braise. Instead of braising stovetop, I did it n the oven at 325. The first hour and 1/2, I had the roasting pot covered with foil, then another hour & 1/2 uncovered, and you turn the shanks every 30 minutes. You want to have them 1/3 to 1/2 exposed so they caramelize. Then, you turn that into the braise.

So, for the final hour, take it out, remove the shanks to a platter and set in the oven, which you’ve now turned off. Put the braise in a pot on medium to high heat & reduce. Mash up the carrots & onion a bit, which will aid in thickening.

You’re done. The puree is a standard cauliflower puree, with a heated melange (see above) of butter, cream, and a tub of crumbled goat cheese. The mustiness of the goat cheese in the puree went perfectly with pungent taste of the lamb. 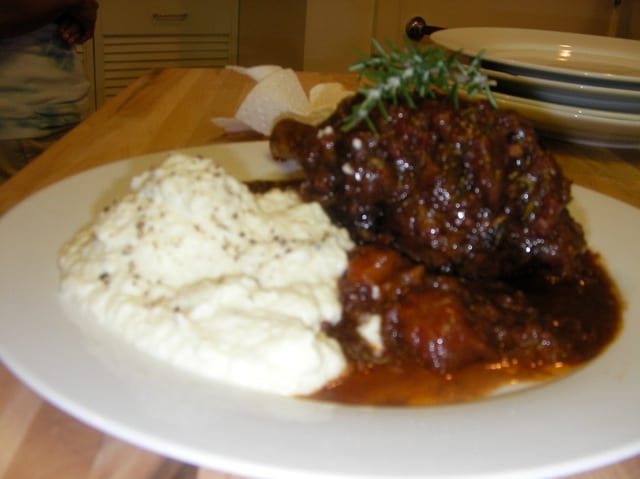 The salad Julie put together, featuring both feta & dill, was as tasty as it was a work of art. 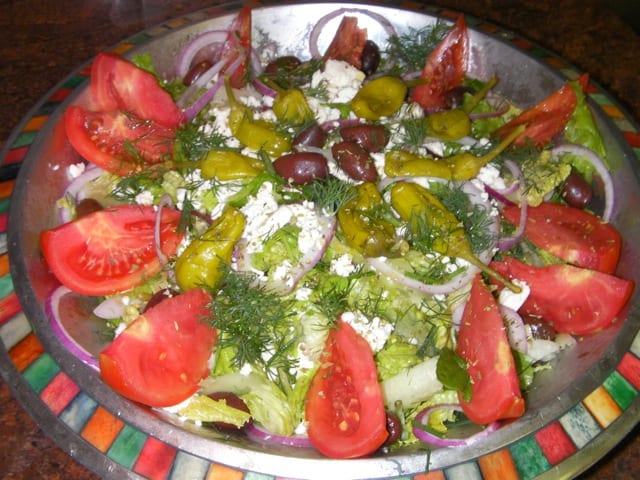 All in all, a wonderful Saturday dinner, punctuated, for me, by a good 9 hr sleep.