Things are, for now, seemingly back to normal. The nearest fires are either out or under control, and except for the early morning, the smoke has cleared out.

We spent one day without power, which is no real big deal camping. Communications and thus, Internet, was down until yesterday afternoon, 2 1/2 days in total. Consequently, I’m buried in catch up. So many of you send me pointers to things in email, which I appreciate a great deal, but I probably have a dozen I haven’t even looked at.

Haven’t flown yet, obviously. But we certainly have eaten well. There’s lots of people up here now — about 18 or so camping with us, and another four relatives staying in a local hotel. Here’s the cooking station: 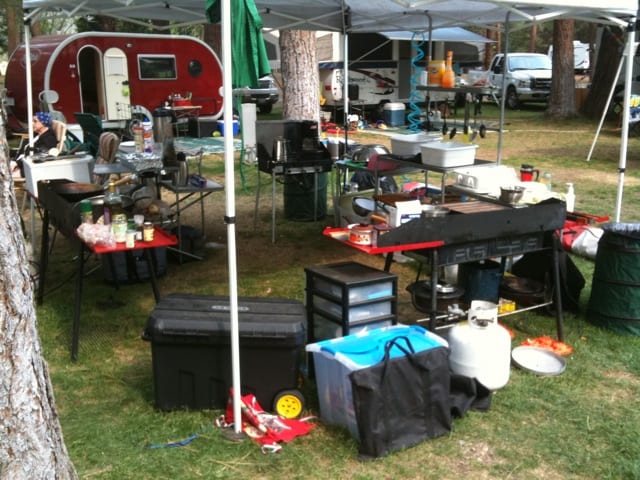 Most notable is how eating habits have changed for most of us. There’s almost no junk food, you won’t find empty and half-full soda cans all over, and you won’t see people grazing and pigging out all day long on packaged stuff.

What you will find is a lot of real food and a lot of work and care going into two primary meals per day, "breakfast" (around 11 am every day) and the evening meal between 7-8 pm.

So, let’s see; Sunday evening my brother made tacos with lettuce "tortillas." Monday morning was bacon, eggs, and my mom’s coconut & almond bread toasted & topped with flourless sausage gravy. Then, for Monday dinner, my brother fixed Texas-style chili, beanless, and it had a combination of sirloin tips and ground venison. Super.

For breakfast Tuesday, it was leftover chili & eggs. Then it was my turn Tuesday night with a huge pot of Indian-style curry with about a 2:1 ratio of yellow & red curry. Tons of beef, some onion, & sweet potato alongside my cauliflower "rice."

Yesterday began with my brother making Mexican chorizo & scrambled eggs, and bacon, and breakfast brats. There was some cantaloupe provided by my wife, too. In the evening it was my mom’s turn, who began with a spinach chowder (no flour). Then came her eggplant "noodle" lasagna, and later, a blackberry cobbler made with almond flour, topped with unsweetened whipped cream.

Not bad and there’s more to come. Tonight, brother Dave is making paella. I’ll try to start getting some pictures.