What serendipity yesterday morning… As I got up around 7am, poured a cup of coffee and sat down with my iPhone, I discovered an email from Dr. Mike Eades inviting me to an event at the California Culinary Academy up in San Francisco that very day. It was to introduce chefs and the media to the new SousVide Supreme the Eades have designed and developed. 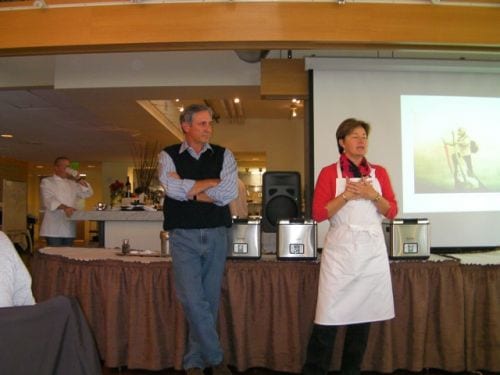 The highlight for me was meeting these fine people, and they are every bit as smiling and friendly as you’ve seen in the videos here and there. This is a couple who feels very good in their own skin and in being together. Delightful all the way around.

So, not only did I get to attend, but Dr. Mike invited me to sit at his table with Dr. Mary Dan and himself. But guess who else? …None other than Tim Ferriss, author of The 4-Hour Work Week. Tim was very friendly to speak with and even recalled where I’d gotten him back on an April Fools joke he pulled on his blog a couple of years back.

But I’ll bet you want to know about the food, right? A couple of days ago, Dr. Mike put up the program and menu, so you can see what was on offer. Presiding over the food preparation was none other than world-renowned chef, Heston Blumenthal, self-taught proprietor of The Fat Duck near London and a longtime expert in sous-vide. The Fat Duck has been voted  by professional chefs the best in the UK, and also best restaurant in the world. A few months back, Dr. Mike blogged about his dining experience there with the Mock Turtle Soup. Chef Blumenthal gave us a video presentation of all that goes into making that, and it’s substantial.

After a couple of other “how we do this” presentations and interesting anecdotes — such as doing a whole pig sous-vide in a jacuzzi — the tasting menu got going. I’m not going to put photos up of everything, but everything was truly fantastic.

I’ll put this one up first because some might think it odd that a world-famous chef would serve scrambled eggs. 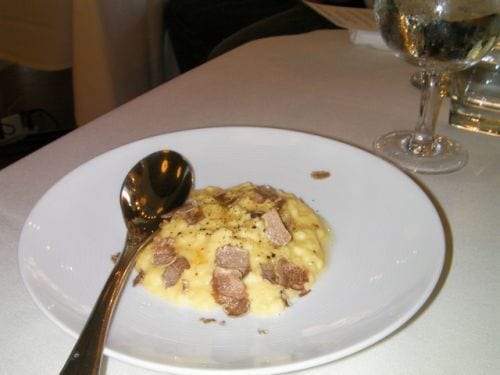 Not only was the flavor unbelievable, but the texture was like pudding. I have long cooked my scrambled eggs on the smallest burner at low. Be patient. They taste completely different. Well, this is even better (and is helped along by the white truffle, of course).

Here’s the beef, perfect medium rare from edge to edge. 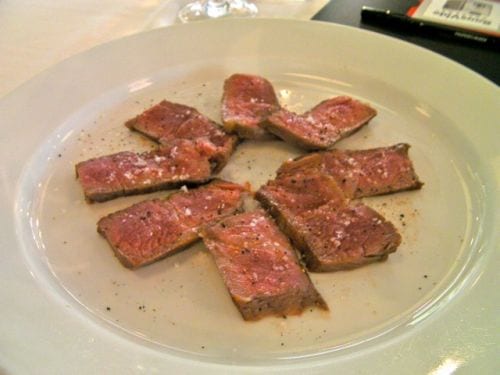 I must say that the chicken was probably the best in terms of improvement over any other cooking method. Mike had warned me about this before we even got started, and he was sure right. It’s really difficult to describe, but it’s tender, moist, and has a flavor as though it has been infused with a particularly concentrated chicken stock. And while the skin wasn’t exactly crispy, it and the nice layer of fat were just delicious. I believe I’d buy a SousVide Supreme soley for the way it does chicken. 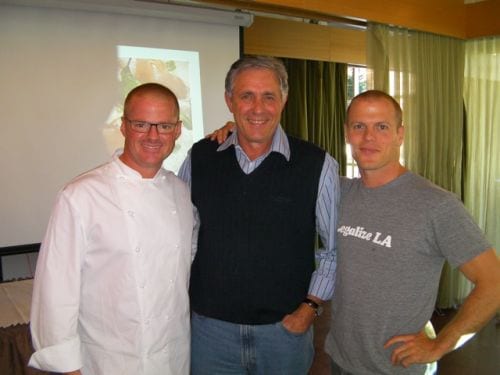 I did also get a chance to speak with the chef. Part of his presentation was about making stock, a subject near & dear to my heart. He did confirm that my way of two days in the crock pot is OK, but he likes to use the pressure cooker because, as he says, that wonderful aroma you’re smelling for a day or two is flavor you’re letting escape.