First off, I don’t make a big distinction — as I see elsewhere so often — between so-called NAFLD (non-alcoholic fatty-liver disease), i.e., fatty livers caused by hyper-carbohydrate diets – what most people consume — and fatty livers caused by alcohol. Most likely, it’s the high levels of fructose in the diet that causes fatty liver in the former, just like excessive and chronic alcohol consumption causes it in alcoholics. And as concerns fructose, I don’t mean from fruit. Roughly half of the sugar you ingest from all sources is fructose. Table sugar (from cane or beet) is precisely 50/50 fructose and glucose and in corn syrup, it’s 55-60% fructose. It’s the enormous quantities of sugar-laden drinks — including fruit juice — that people consume that’s causing this epidemic of fatty livers, even in children, now.

It seems to me that there’s pretty good reason to speculate that it’s drinks that are the culprit, both sugary drinks and alcohol. The thing about them both is that they are extremely energy dense for volume, so they don’t fill you up, and they’re typically downed rapidly, often without any fat or bulk to slow absorption, so the fructose, as does the alcohol, goes straight to your liver in a cascade and has to be dealt with quickly. Fructose is unique as a sugar in this way.

For a great primer on fructose and alcohol metabolism, see physicist Robert McLeod’s entry that I’ve linked to before.

The conclusions we can draw from this body of research are that one can safely ingest glucose regularly with the aim of not saturating the liver’s glycogen storage capacity. The maximum reasonable glucose intake level will vary significantly from person to person depending on general activity level and overall health based on how insulin resistant they are. Where one gets into trouble is when you overfill your liver by eating too many calories, with a significant fraction of glucose calories, or significant fructose intake (likely in the form of sugar or corn syrup). This is likely to lead insulin resistance and liver dysfunction.

There’s other reasons I’ve come to conclude that fructose is the culprit. The best way to find out would be to isolate variables. After all, if you have test subjects down a lot of soda pop, the sugar is 50/50 (or up to 60/40 fructose, as noted above), so it would be hard to definitively tell what caused any changes noted. But here’s what you could do: give test subjects the same number of sweet drink calories, only sweeten one group with 100% glucose and the other with 100% fructose and see if there’s any difference after a period of time. Well, you’ve guessed the punch line: not only is there a difference, there’s a HUGE difference.

Dr. Stephan Guyenet sums it up.

The investigators divided 32 overweight men and women into two groups, and instructed each group to drink a sweetened beverage three times per day. They were told not to eat any other sugar. The drinks were designed to provide 25% of the participants’ caloric intake. That might sound like a lot, but the average American actually gets about 25% of her calories from sugar! That’s the average, so there are people who get a third or more of their calories from sugar. In one group, the drinks were sweetened with glucose, while in the other group they were sweetened with fructose.

After ten weeks, both groups had gained about three pounds. But they didn’t gain it in the same place. The fructose group gained a disproportionate amount of visceral fat, which increased by 14%! Visceral fat is the most dangerous type; it’s associated with and contributes to chronic disease, particularly metabolic syndrome, the quintessential modern metabolic disorder (see the end of the post for more information and references). You can bet their livers were fattening up too.

The good news doesn’t end there. The fructose group saw a worsening of blood glucose control and insulin sensitivity. They also saw an increase in small, dense LDL particles and oxidized LDL, both factors that associate strongly with the risk of heart attack and may in fact contribute to it. Liver synthesis of fat after meals increased by 75%. If you look at table 4, it’s clear that the fructose group experienced a major metabolic shift, and the glucose group didn’t. Practically every parameter they measured in the fructose group changed significantly over the course of the 9 weeks. It’s incredible.

I drink exactly zero sweet drinks (even artificially sweetened drinks), and haven’t for a very long time. Mostly, I drink water and sparkling water. This, of course, is only partially for health reasons. The other is that I can drink more scotch. Fructose or alcohol: pick your poison. The difference, of course, is that even if you drink pretty frequently, it’s doubtful that you’re going to get anywhere near 25% of calories from alcohol regularly. It tends to have its own built in limiting factor for most people, even though I have found that paleo has dramatically boosted my tolerance for the stuff — not necessarily a good thing. Anyone else had any alcohol tolerance changes after a significant time paleo?

Alright, so let’s get to the point of the post, which is fatty liver reversal. Curiously enough, there’s pretty much zero the medical profession will do for you, except that, if your fatty liver is the result of alcohol consumption they’ll tell you to stop drinking — moralizing, guilt-inducing people that humans seem to be.

They’d probably tell you to check into a Florida alcohol treatment rehab too. Of course, if it’s all or mostly alcohol that caused the fatty liver and you’re also not a sweets freak, reducing or eliminating alcohol will help.

But what about NAFLD? Huh? How come there are seemingly zero prescriptions for dealing with it, since there are no drugs. OK, let’s think of it this way. …Do you think anyone is working on a drug to cure an alcoholic’s fatty liver as he goes on drinking? That would be silly; some would say irresponsible, and the reason should be obvious. First you remove the cause, right?

So do you think that the general cause of NAFLD is that difficult to understand? Well, it sure must be. Get a load of this comment at Dr. Stephan’s place where he blogged about a reader’s fatty liver reversal, basically, by eliminating sugar and supplementing with fish oil.

As a physician (MD), it was encouraging to read this blog and the testimonials regarding increased ALT and in particular “fatty liver”. For two years, I have had borderline to somewhat elevated liver enzymes, especially ALT. At my most recent physical examination, my AST was 41 and my ALT was 101 (the last two years the numbers were similar, with the exception of an ALT rise from 65 in 2008). My internist told me that the next step would be a liver ultrasound and additional laboratory tests should the numbers not come down. On review of the formal medical literature, I could not find much about lowering ALT and treating a fatty liver with the exception of stopping all alcohol, losing weight, and exercising. I am 5’10” and 185 lbs. – slightly overweight, but certainly not obese, and I do not have diabetes. As with another patient’s discussion, I do not regularly exercise (as I should) because of my work schedule and two young children that take up the rest of my free time.

For a two week period, I followed much of the advice that I have read in this blog:

1) I limited alcohol intake to 1 glass or less of wine per day (before < 2 drinks per day)
2) I stopped taking Pepcid and Tylenol (metabolized by the liver)
3) I stopped drinking diet soda and drank more water, tea, and V-8 juice (was drinking 3+ Diet Cokes/day – Aspertame)
4) I increased raw vegetables (salad) and cut back on fatty red meat (no fast food)
5) I started taking 1200 mg of fish oil/day twice daily
6) I took a daily supplement called Livatone (mostly milk thistle and B vitamins) as well as a garlic pill

My repeat liver enzymes after only two weeks of this regimen were AST 20 and ALT 60 (down from 41 and 101 respectively). I would anticipate continued improvement with time.

Now Dr. Stephan (PhD biologist) is a very sharp guy and runs a great blog, but what does it say when an MD has to go Googling the blogosphere to get decent help for something that even an agitating layman like myself can figure out (well, I do plenty of Googling too)? That’s pretty telling. Oh, yea, they did manage to tell him to stop alcohol (of course, sinner!), eat right (yea right), and exercise. Wow, such comprehensive advice.

And what was Dr. Stephan’s advice to the guy who dramatically reversed his fatty liver in a month after having abnormal test results for seven years?

The quality of fat you eat has a very large influence on health, and especially on the liver. Excess omega-6 is damaging to the liver. This type of fat is found primarily in refined seed oils such as corn oil, soybean oil, and safflower oil… Sugar is also a primary contributor to fatty liver. Reducing your sugar intake will go a long way toward reversing it. Omega-3 fats also help reverse fatty liver if an excess of omega-6 is present. There was a clinical trial using fish oil that was quite effective. You might try taking 1/2 teaspoon of fish oil per day.

But that’s not all. He did it again, with another reader. And now just recently, part 2 of that same experiment. While a picture is worth a thousand words, particularly in this case… 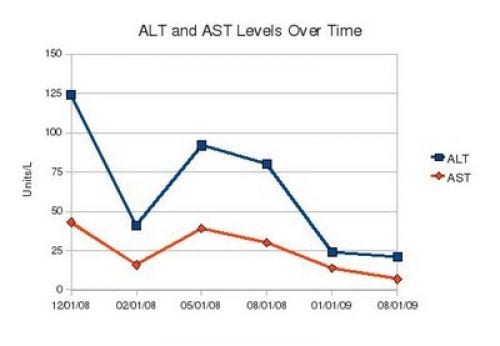 …do go read all about it on the links to Dr. Stephan’s blog.

Now I ask you, what have us “paleo” bloggers been saying for quite a while, now, in regard to diet? Compare that to what Steve did to dramatically reverse his fatty liver condition.

I totally eliminated sugar, heavy starches, and grains. Started eating more whole, real foods, including things like grass-fed beef and pastured pork and eggs, began supplementing with good fats and omega-3 (pastured butter, coconut oil, cod liver oil). Ate more fruits and vegetables instead of refined carbs. Also completely gave up on the idea that I had to eat only “lean” meats. After my last results, the GI doc said that I wouldn’t need the biopsy at all, that things were great, and that if I kept it up I “would live forever.”

The added bonus, of course, was that my weight went from 205 pounds to 162 pounds and my body fat percentage from 24% to 12% in the matter of five months–all without the typically excessive cardio I used to try unsuccessfully for weight loss.

The mind boggles at the general incompetence of the entrenched medical/pharmaceutical juggernaut.