This isn’t appropriate for those on strict, low-carb regimes. I have found, however, that so long as it’s pretty real food (TM), I have no problem with occasional ingestion of potatoes cooked sensibly: do your fries in lard, coconut oil, or tallow and add lots of butter and cream to mashes & purées.

Here’s the prep, which is about 2 soup ladles worth of my homemade beef stock (frozen), reducing, as well as pats of organic butter in organic cream. This is for two helpings, which are two medium potatoes. 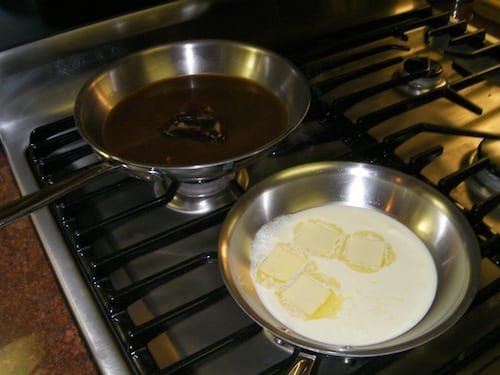 I did the grassfed tri-tip in the oven at 250 with a temp probe, removed it when the internal was 125, then fired the broiler on high and did about 2 minutes on each side, rubbing them down with butter.

The idea with the purée is to make it somewhere between a mash and a hearty soup, such that you spread it out over your plate, using it as a bed for the meat. Food processors work best to get this level of smoothness. It should come out like a pudding in consistency. 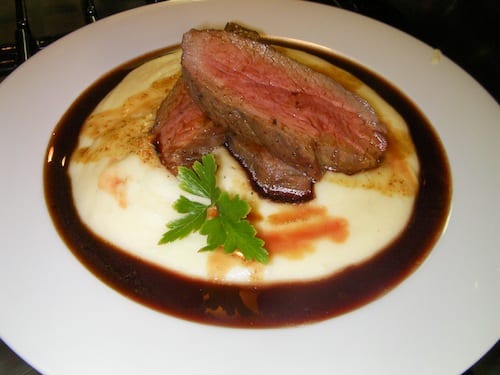 And there you have it: last night’s dinner for two.

One final note, and it’s a note of dismay. I did not particularly like the taste of the fat on this grassfed roast from La Cense. The lean meat was delicious, but the fat had an off-putting, gamey taste to me. Perhaps I just need to get used to it. On the other hand, all the grassfed steaks I’ve enjoyed have been excellent, including the taste of the fat.