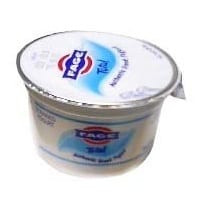 So far as a search of the blog goes, I appear to never have mentioned probiotics in a post (others have brought it up in comments a coupla times).

There’s a good reason for that. For one, I never noted any benefit from drinking acidophilus-spiked milk. And, I’ve tried a few supplements from time to time and never got any benefit that struck me in particular.

But now I’m convinced on a whole number of levels, at least for myself. Your mileage may vary.

A while back I started buying fresh — neither caned nor bottled — sauerkraut, both from a local supplier to Whole Foods and at a farmer’s market (from wooden fermenting casks, no less). The problem is that the various sauerkraut dishes I make (spareribs, pork roast, or sausages) require cooking, which kills the bacteria. So, I noticed I really liked the fresh sauerkraut raw, and it seemed to like me too, particularly if I had a few fork fulls with breakfast.

And then I discovered FAGE Total Yogurt (pronounced "fa-yeh"). You’ve gotta try this stuff, and only get the full fat version, unsweetened, of course (they have: 0%, 2%, 5%, and Total; 35% fat, 90% of that being blessed hearthealthysaturatedfat). Realize: whenever you use dairy and go for the crappy, shitty, awful, reduced fat garbage — for any volume you are ingesting — you’re trading fat for carbs, i.e., something critically healthy and nutritious and filling for: SUGAR. Yes, you’re trading real nutrition for sugar. Even if they don’t add any, just in removing the fat, the same 1/2 cup is going to have far more sugar to make up for the void created by removing the good part.

Modern ignorance. Don’t be fooled. Never, ever get any sorts of real food that removes natural fat. I guarantee you that the void that remains will almost certainly be filled with cheap shit that’s generally bad for you and good for profits.

Alright, didn’t know I was going to rant, but there you have it. Moving on…

As I have continued to do this, trying to get some form of probiotic from real food in the morning and evening, and doing it for several weeks now, I’m just sold. It seems like everything is better, even mental attitude. Certainly, some digestive issues have also completely resolved.

FAGE TOTAL Yogurt is 100% natural. It contains no added sweeteners, thickeners or preservatives. We do not use powder milk, powder cream or powder protein in FAGE, just raw milk, raw cream and live active cultures which come together for a naturally blissful taste experience. In line with our All Natural approach to yogurt making, our milk and cream supply comes from farmers who have pledged not to treat their cows with rBGH*. FAGE is an excellent source of protein due to its unique straining process. Vegetarians can eat FAGE TOTAL and is also suitable for diabetics, pregnant women and people on gluten-free diets. It can also be used to cook with in your favorite recipes since it will not separate in high heat. FAGE is pure, creamy and can be enjoyed without adding anything to it. It is simply delicious and nutritious.

I’m really sold on it.

So back to sauerkraut. Last evening I decided I wanted a hearty meal. Bea’s out of town, so I considered going out, but then decided I absolutely should fix a good meal. But, I’d also downloaded two movies on Apple TV, so didn’t want to take a lot of time. 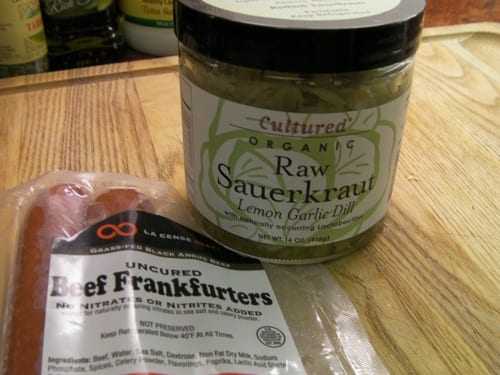 Yep, grassfed franks from La Cense. Now, how to prepare while keeping the good bacteria? 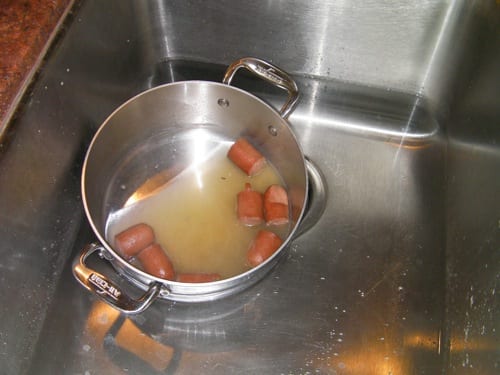 Franks in their juices & stock cooling down

So I cut up the franks, added water & chicken stock just to the top of the franks, brought to a boil and simmered a few minutes. Then I removed the franks to a dish in the oven, warming at 140 while I reduced and concentrated the stock. Took maybe 10 minutes or so, I reintroduced the franks and set the whole pan in cold water to cool it to where it was hot to the touch, but not scalding. I then took it out of the cold bath and introduced the kraut. 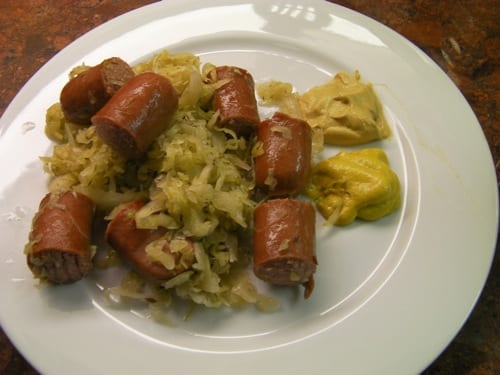 I like with both Dijon & yellow mustards. This was so very satisfying and the feeling of well being fantastic for hours. I had my yogurt later and ended up fully alert until 2am. Got up at 8am this morning feeling just fantastic in every respect.

So, any other experiences, positive or negative? Anyone think it’s all hype?