Now that it’s getting colder, a lot more hearty dishes like stew, chili, and curry are going to be hitting the blog. Rumor has it that I’ll be up for another chicken mole in my style come Saturday night. 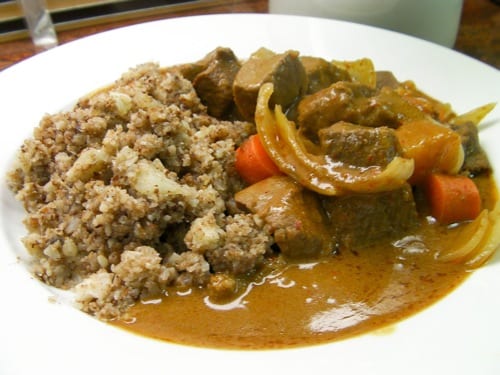 The typical recipe calls for beef (I used sirloin filets), onion, carrot and white sweet potato (I used cubed butternut squash). As for the curry paste, minimum a huge heaping tbsp per can of coconut milk. I did about 1 1/2 tbsp plus maybe a half tsp cayenne pepper for heat. Ultimately, you’ve got to find your own taste. The recipe also calls for peanuts. I said "what the hell" and added a tsp of organic, unsweetened peanut butter.

I first browned the meat in 2 big tbsp of coconut oil. Then, add the coconut milk (1 can per pound of meat is what I do) and curry paste; bring to a boil, cover & simmer about 15 minutes. Then add the veggies and simmer another 15. Test for tenderness in the meat & veggies and go a little longer if you need to. This was the first time I used butternut squash. It was not as good as the sweet potato, but acceptable. (Anyone know offhand the carb difference?) Anyway, it got soft really fast, so next time I’ll put it in for only the last 5-10 minutes.

For the "rice" I took some cauliflower, broke it into small pieces and then used very brief pulses in small batches in the food processor. Way easier than chopping finely. Then the wok went on high with 2 tbsp coconut oil and about a heaping tbsp of almond meal. Let the almond meal brown, toss in the cauliflower and stir fry on high for a bit, then reduce to let moisture escape. Sprinkle with cinnamon to taste for an amazing taste combo with the curry.