A Fine Day In The Echo Chamber

The morning started off just right. Sunrise on the patio, a cup of coffee, then skipped the morning hour long walk because Bea was off in the morning and wanted to do it.

To top it off, a comment from reader Ian.

Richard, your blog is great and the effort you put into photographing your paleo lifestyle including recipes and cooking techniques is invaluable, as are your regular updates containing links to articles with new relevant information for those pursuing or curious about pursuing this lifestyle.

I’ve been reading it pretty frequently, sometimes multiple times per day just to flip through the old posts and drool over your delicious looking creations and soak up your thoughtful advice.

However, when it comes to your advocacy for the paleo diet, you’re doing yourself and others who are interested in it, and are ignorant of it, a great disservice. Arguing from a position of unchallengeable authority, or even just arrogance peppered with accusations and attempts at mockery is not only unpersuasive but totally alienating to anyone who doesn’t already share your point of view.

In other words, you sound like a shithead. Based on the rest of your blog, i think it’s pretty unlikely you actually are one, but at first glance at one of your forum posts, who would know?

Getting as close as possible to the truth on any subject that falls under scientific scrutiny is difficult, it requires dispassionately analyzing the evidence available and trying to come to the best objective conclusion, then sharing your analysis of the evidence and having it sanity-checked by others.

It’s not a rap battle or a comedy central roast. Calling a guy who has spent a decent portion of his life trying to educate people on nutrition and bring them away from processed foods and to whole natural foods a liar (”inconsistent, bordering on dishonest”) because he hasn’t been persuaded to your point of view on meats and fats yet is pretty uncalled for.

People who believe differently from you are not your enemy to be destroyed, but your ally to be persuaded, this is the only way meaningful knowledge can advance. Making an argument to someone requires having a sensitivity to their point of view, ie understanding what it is and how they established it if possible, and then building on it with a combination of persuasive rhetoric and dispassionate presentations of the evidence you feel supports your position.

Quips like “do the math” and “the religion of plant based dieting” do not serve this cause well. It also sets the tone for the participants and readers of your blog, the first comment was someone making a point about the perceived ecological impact of the meat industry to which someone responded just to call them a “lower case troll”. What the hell is a lower case troll? We’re really going to attack peoples conversational internet grammar because they have an environmental concern? That’s where unnecessary vitriol inevitably leads.

But don’t take my word for it, here’s an excellent and highly amusing video of Neil Tyson making a similar argument to Richard Dawkins.

Though my response didn’t mention this (I thought about it later), Ian makes one point I have a certain sensitivity to: "It also sets the tone for the participants and readers of your blog." Yep, that’s the risk and I must say that I generally don’t like commenters slinging shit (either direction). That’s my job. Call it inconsistent, or whatever, but the post is designed to — as I’ve often said — hit & run or slash & burn, then let’s hammer it out in comments. Anyway, that’s my goal: to use the posting to draw in the traffic, then let’s have a decent discussion. And, yes, I don’t always live up to that ideal myself.

Anyway, the day gets better. I headed off to the gym shortly after the above & had a really great workout. And then I get back from the gym and, low-&-behold, I’ve got another comment, this time from John.

Ian, you are absolutely correct about Richard. Having read this blog since before Richard started bowing to Art DeVany, I have noted that Richard’s personality at its core is that of a know-all asshole whose primary mission is to win a fight/argument, not necessarily find or promote truth. In other words, whatever Richard believes today is the Truth. The point of the blog is to satisfy Richard’s congenital need to express his rectitude. He is always “immovable”.

Like a blind pig, Richard’ has latched onto the paleo thing. For the most part, I find his writing entertaining and often informative (I focus primarily on his cooking explorations), but always subject to scrutiny.

His and Jimmy Moore’s ilk consistently react to criticism the same way their targets do: name-calling and instant dismissal, with a dash of unsubstantiated counter-claim. The echo chamber is an easy/comfortable box in which to live. But that is part of the entertainment of the blog. It can be helpful to read things that often annoy me and keep me questioning and investigating, such as Richard’s comically authoritative perspective. It requires more than what Richard’s intellect possesses to argue his perspective dispassionately.

If you prefer more consistently moderate and accurate reading, read Art. Art’s writing reflects a deep and long-running interest in what makes for healthful living. Art also is an actual prototype for long-term health (as opposed to Richard’s born-again evangelism). Art’s ego is satisfied with considered thoughts and a focus on his own health and on sharing his experiences and observations without shrill ridicule.

If you primarily want entertainment, read Richard. But don’t expect any less lyprocrisy or hyperbole from him than from the people he ridicules.

So, there you have it. Right out in the open. Just taking one in the chin for Team Echo-Chamber.

I’ve always said — ask my wife — that I enjoy being loved & hated just about equally. It’s far, far better than indifference, so I’ve got to give a warm thanks out to both Ian and John for helping to make it a great & effective day.

I think I’m right on track. For those who care to wonder why I engage in the style I do, it’s really the only way I could. Entertainment? Yep, that’s primarily it, for me — the lifestyle has its own rewards and I don’t need to be doing this to get all the rewards such lifestyle offers. Part of that entertainment is the inputs, i.e., the posts, all of the posts. The other part is the results we get to read about and the help other readers are more than willing to give.

It takes what it takes. But I’m sure both Ian and John spend far more time and effort promoting paleo in their own ways than I do, and I’m sure they’ve convinced a lot more people than I that a paleo path is a good one. Possibly — I’d have to look — but perhaps Ian & John are really the ones responsible for this. 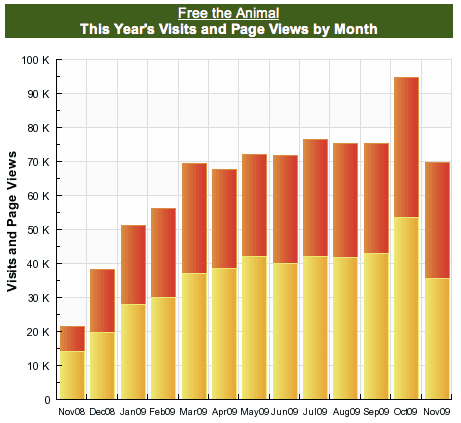 Thanks Ian & John for all the hard work.