This is a continuation of two previous posts on saturated fat epidemiology and looking at the government data in different ways. For the background, see the previous posts:

As you’ll discover, the impetus behind the second post was Shangi-La Diet author Seth Roberts’ complaint about how some of the data was presented. He now appears satisfied, but one of his readers isn’t. You can read those comments here. Essentially, Vince ran the numbers but corrected for GDP in each country and the significance went away. Well, at least the correlation didn’t reverse the other way.

One thing Alex Thorn remarked to me about early on in constructing this data is that the saturated fat was given as a percentage of total energy intake, not an absolute amount. We initially thought that was a better way to present but in Vince’s analysis, and the discussion that ensued, it came to light that there was vast differences in total quantity of saturated fat consumption even where percentage intake was relatively close. And, so, I suggested that Alex run the data on absolute consumption rather than relative, and then have Vince adjust for wealth.

And, so, Alex reports. BTW, you can click on those last two graphs to open the full-size versions.

Please find attached the graphs using the DALYs statistics plotted against absolute animal fat intake (g/person/day) – the source of these particular statistics had not broken down fat consumption into saturated, mono-unsaturated & polyunsaturated but rather animal and vegetable.

I also used CVD mortality statistics (per 100,000 head of population) from the WHO website plotted against total animal food intakes (g/person/day), which is made up of meat, offal and animal fat (not including eggs or dairy), and also the ratio between total CHO, which includes cereals, starchy roots, fruits, vegetables and sugars & sweeteners, and total animal foods. These graphs are also attached.

These latter two are quite interesting. The first (total animal foods vs CVD mortality) has a marked trend for greater CVD mortality in populations who consume less total animal foods. While the second takes into account that poorer nations make up the shortfall in animal foods with cheap CHO foods especially cereals and starchy roots. In this one there is a trend line sloping upwards (the greater the ratio of CHO to animal foods the greater the CVD mortality rate). There is an impressive clumping of the countries with the lowest ratio of CHO:Animal Foods (France, Denmark, etc – known for low CVD rates). It should be pointed out that these countries also have higher rates of absolute CHO consumption, so the ratio is kept low by having very high animal food consumption. 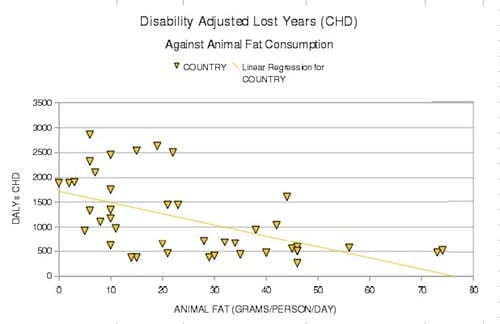 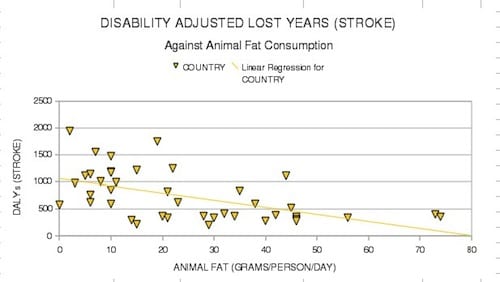 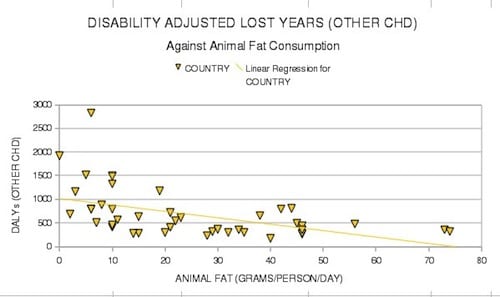 Other CHD vs Animal Fat 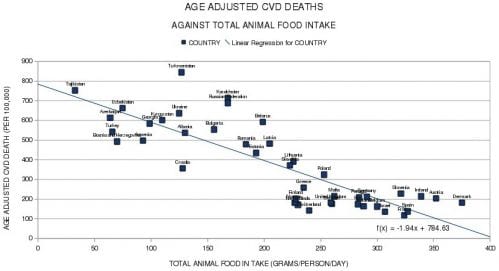 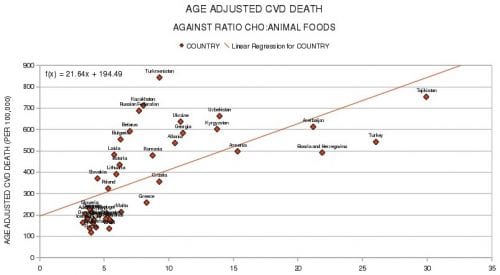 The More Carbohydrate That Was Eaten in Place of Animal Food, the More CVD Death.

Here are a few graphs relating the “animal to vegetal energy ratio” with several epidemilogical variables. The x-axis data is from FAO-STAT Consumption: “Animal Products + (kcal/day), 2003″ and “Vegetal Products + (kcal/day), 2003″ and the y-axis data is from the BHF-British Heart Foundation and the WHO-World Health Organisation. ->

Go have a look.