I originally came up with this just trying to approximate what I had eaten at a local restaurant, the main taste being chocolate. While it was fabulous, some pointed out that traditional mole has spices. And, so, here we are again. 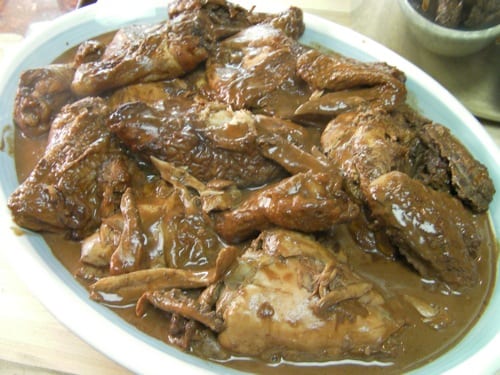 I again used a rotisserie chicken, but no spice rub on it this time. It was two chickens, so, 2 cans of coconut milk, one bar of Lindt 85% cacao and about 2/3 of that amount in some organic dark chocolate with cherries and red peppers from the farmer’s market I had laying around. I’m not a big eater of dark chocolate and it tends to stay around until I have a use for it.

To that I added about two heaping teaspoons of chili powder (Texas variety) and perhaps a half teaspoon of cayenne. And that was it. Simmer & reduce, and serve. 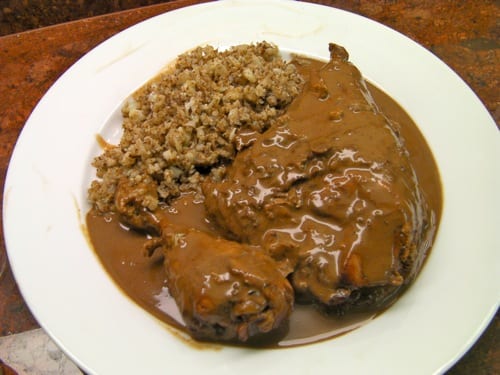 I believe I used a 70% bar the first time, and this was 85%. I definitely noticed that it wasn’t as sweet as before. But that was fine. I definitely liked the spiciness. On the side was my chopped & stir fried cauliflower with almond meal & cinnamon. I detailed how I do that here.

For the "rice" I took some cauliflower, broke it into small pieces and then used very brief pulses in small batches in the food processor. Way easier than chopping finely. Then the wok went on high with 2 tbsp coconut oil and about a heaping tbsp of almond meal. Let the almond meal brown, toss in the cauliflower and stir fry on high for a bit, then reduce to let moisture escape. Sprinkle with cinnamon to taste for an amazing taste combo with the curry.

…Or, with chicken mole, as it were.