I’ve got to get this reader data out there; sooooo, the post I’ve been planning and writing to slam dunk a certain "researcher" from New Zealand will just have to wait until the first of next week. I’d planned to incorporate that with this, per my style, but I’ll just have to link it.

Whenever back when, I did a post on saturated fat epidemiology from a UK reader, Alex Thorne. He was pretty careful in that — unlike science frauds and grant whores — as an honest guy, he anticipated objections and so constructed and graphed the data in different ways. You can go read that post here.

Fast forward to a couple of weeks ago. Seth Roberts, author of The Shangri-La Diet, wasn’t satisfied. I’d dropped a comment at his place over something I can’t recall, and I guess he checked out my place and his comments begin here. So, you can read the basis for Alex’s additional work, which I’ll now display. First, Seth was kind enough to take the time to offer a method:

Here’s a better way to look at these data: make a scatterplot with X = percent saturated fat and Y = disability adjusted lost years per 100,000 population. To see if large and small countries are different, divide the countries into two groups splitting at the median of their population sizes. Then plot large countries with one color of dot (say, red) and the small countries with a different color of dot (say, blue). That will show you if the large and small countries show the same trend. If you want to see even more clearly, fit separate lines to the two sets of points and plot those lines in different colors.

The trends are still evident – the more saturated fat in the diet the fewer years lost to disease. 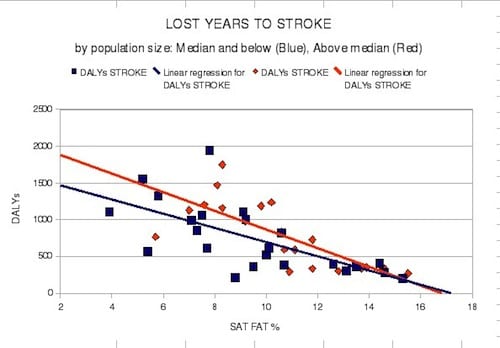 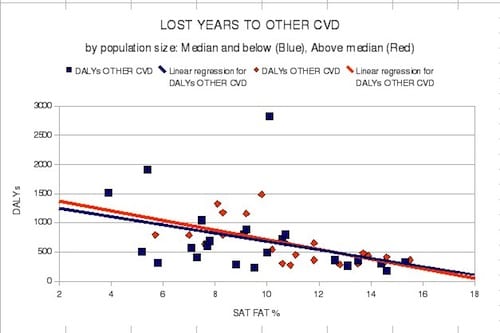 It seems no matter how you slice it, more real, natural, saturated fats from animals and coconuts are wonderfully healthful.

Go figure. I mean, should this be a surprise? Are predatory animals who eat other animals and prize the [saturated] fat dropping dead of strokes and heart disease? No, and why? Because they’re less arrogant than humans. They don’t, because they can’t, eat in any way other than how they evolved to eat.

Go forth and do likewise.