The other day I happened to hit Kat’s place, and then her blog, where I saw that she did a chicken pot pie, although she used standard pastry. I was thinking how much I always loved pot pies, and wouldn’t it be great to make one. Then it dawned on me: cauliflower crust, just like for pizza. Click on the image to enlarge. 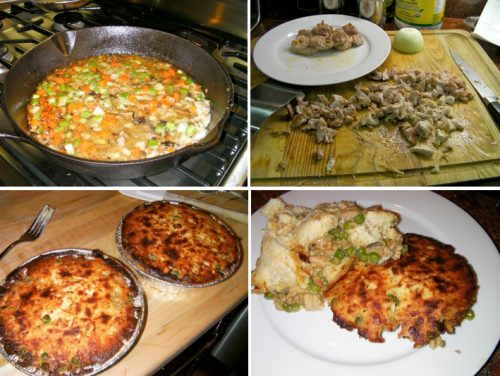 So, I used the original crust recipe almost exactly. However, now I have a food processor and so was able to really make the cauliflower into a mush. To the cup of cauliflower, cup of mozzarella cheese and an egg, I added about a tbsp each of almond meal and coconut flour.

As for the filling, I followed Kat’s recipe with the following modifications: 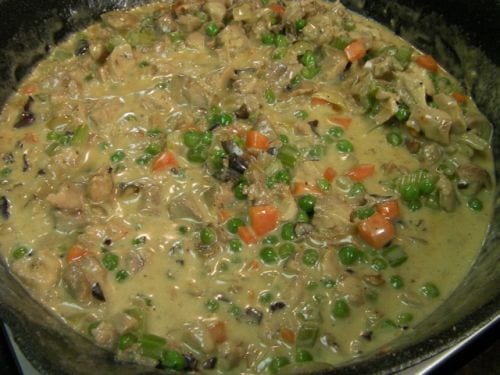 So, as with the pizza crust where you have to cook it first, I greased the pie tins  with butter and then coated the insides with dough and popped ’em in the oven at 350. Oops. Within a few minutes, all the "dough" was sitting at the bottom of the tins. Cranked up the oven to 400 and let them cook a bit more to release moisture. Next time, I’m going to roll up my cauliflower mash in paper towels to get rid of moisture. Also, more almond meal, coconut flour and maybe some butter or lard will help. Another thing I could do is stack another tin on top to keep the dough in place while it sets up.

At any rate, I took them out after a few more minutes, the dough was still pliable, and so I added a few dashes of coconut flour and was able to get the dough to adhere to the sides of the tins using a fork. Then I added the filling and covered with the remaining raw dough, and then into the oven again at 350, probably 10 minutes or so.

Remove, melt butter on top, and fire under the broiler until well browned. 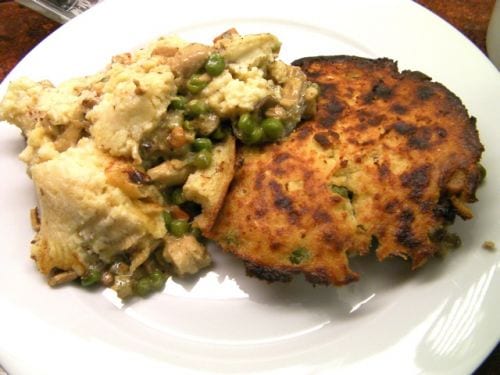 This was very exceedingly delicious. Definitely something I will do again and attempt to improve.