In Part II of this series I wrote that this installment would be about the "best research" those supporting the saturated fat-cholesterol-heart disease link or "causal chain" might use (here’s Part I). In the process of doing my homework for that post I came across something I think fits in here because I essentially want you to have some idea of what you’ll be up against.

This supplemental entry began when I hit the blog of Dr. A (a reader & commenter here) in the UK: Livable Low Carb. I’ll show you a couple of the graphs she posted in a moment, but for now, how about a quote from the British Heart Foundation website on Diet?

It is now universally recognised that a diet which is high in fat, particularly saturated fat, sodium and sugar and which is low in complex carbohydrates, fruit and vegetables increases the risk of chronic diseases – particularly cardiovascular disease (CVD) and cancer. These risks are outlined in the World Health Organization 2003 report Diet, nutrition and the prevention of chronic diseases. The more recent World Health Organization Global strategy on diet, physical activity and health emphasised further the need to improve diets in individuals and populations across the world.

The dietary changes which would help to reduce rates of coronary heart disease (CHD) in the UK population were detailed in the 1994 report of the Government’s Committee on the Medical Aspects of Food and Nutrition Policy (COMA). This recommended a reduction in fat intake, particularly saturated fat intake, a reduction in sodium intake and an increase in fruit and vegetable and complex carbohydrate intake. In the 2003 report Salt and Health, the Scientific Advisory Committee on Nutrition (SACN) (which replaced COMA in 2000) repeated COMA’s guidance on salt intake in adults and introduced additional guidance on reducing salt intake in children. In 2005 the Government dietary objectives were reiterated in Choosing a Better Diet: a food and health action plan.

I considered clipping some of that, but it would only serve to dilute what is clearly intended to be a VERY STRONG MESSAGE: reduce fat, especially saturated fat and eat more fruits & vegetables. But why? This is something I’ll get into in much more depth in the final entry, but here’s just a tidbit. When you really start digging into CVD stats it becomes clear that CVD deaths and CVD incidence are constantly conflated or at best conveniently left ambiguous. If a researcher wants to tell you that reducing saturated fat has been successful, he’ll haul out CVD death stats and indeed, there has been a tremendous decrease in death from CVD over the past decades. But they’ll rarely tell you in the same breath that the incidence of cardiovascular disease — i.e., heart attacks and other CVD markers — is pretty much as high as ever. So, is the reduction of death more likely a function of decreased saturated fat intake or more likely some other factor like improved urgent and emergency care in the face of a heart attack? As usual, a review of Occam’s Razor seems appropriate.

So, now, here’s a couple of Dr. A’s graphs for saturated fat consumption and fruit & vegetable consumption trends since 1975.

Oh, did I mention? This data comes from the very same website as the quote, above, the British Heart Foundation. You know what? I’m fairly confident that I could take any kid of normal mental function, explain the parameters including the distinction between CVD incidence and death, ask him or her about association and cause, and get the obvious conclusion: time to look elsewhere.

But kids are naturally honest about such things. For them, it’ll be another 20 years before they are "fortunate" enough to get paid for lying and manipulating, which brings us to the second case study in cognitive dissonance. Let’s begin with the names, ’cause I always name names.

These names, of course, are prominently displayed in large bold font right after the title of the study: Lipid levels in patients hospitalized with coronary artery disease: An analysis of 136,905 hospitalizations in Get With The Guidelines (PDF)

No potential conflicts of interest there, eh? I guess that "disclosure" is the name of the game, now, and not the simple fact of the matter. Here’s a novel idea: how about simply publishing and paying attention to studies where financial disclosures are unnecessary? Yea, yea, it’s impractical and I also don’t want to unfairly paint with too broad a brush. Moreover, I’m no Luddite when it comes to the great contributions over time of doctors, researchers, and yes: drug companies. But isn’t this getting out of hand?

This was a captivating study to read for the cognitive dissonance, the subject of this entry. Remarkable to me is that I can detect no data manipulation or even evasion of data and facts (until the conclusion, which is an evasion to take your breath away). That’s what’s so interesting. It’s all there. Everything is there to make the same childlike conclusion as we did up above: time to look elsewhere. 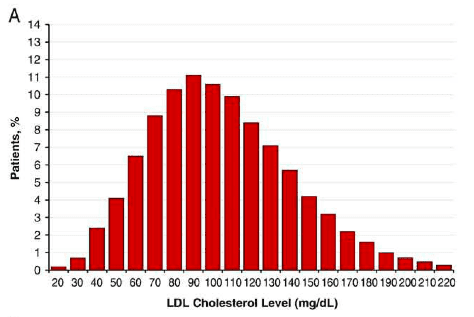 Now that’s almost as perfect of a Bell Curve Distribution as you’re ever going to see — and I’d guess that if LDL levels actually ran to zero in people that you’d see an absolutely perfect distribution. I remind you: these are the LDL levels of 137,000 people admitted to a hospital with coronary artery disease. Let’s imagine a scenario, for example, measuring blood alcohol content in people involved in automobile accidents. Would that be a Bell Curve, or, would you naturally expect that the higher the BAC, the more accidents (an ever increasing curve)? Now there you have a definite causal relationship and the data is going to show it unambiguously.

Now let’s look at some quotes from the study (PDF).

How about let’s put this final quote in bold.

The present study demonstrates that among patients hospitalized with CAD, the admission lipid levels are below that of the general population.

And, so, what’s the OBVIOUS conclusion from all these data points, observation and reasoning?

Shorter version: lower the cholesterol guidelines even more (and, hey, why not throw in a few billions of dollars more of statin Rx?), because heart attack victims already have average cholesterol levels less than the general population. OBVIOUSLY; more lower, please. And, while we’re at it, let’s come up with a few billion dollars market for meds to raise HDL.

Hey, maybe they could hire me to consult on that last point, since my HDL runs in the 130s and directly measured LDL in the 60s. Of course, that requires no meds, but only a diet of real foods high in natural, healthful saturated fat, plenty of animal protein, some veggies, fruits & nuts — and occasional bouts with full fat, raw dairy.

So, no chance for me to cash in, I guess. I’ll have to content myself with naming names of those who put their livelihoods above your health and are willing to engage in head-spinning cognitive dissonance to hold their lucrative positions of authority.