It might strike you as odd that with all the various beef and other fancy dishes I do — putting such care into my sauces and such — that after laying down $400 for a kitchen appliance I would choose chicken breasts as the first dish.

How often do I do chicken of any kind? Not very. And it’s not that I don’t like chicken — I do — it’s just that I usually have something better in mind.

Back when I attended the Doctors Eades’ presentation in San Francisco, Mike told me to pay particular attention to the chicken. I did, and here’s what I wrote about it.

I must say that the chicken was probably the best in terms of improvement over any other cooking method. Mike had warned me about this before we even got started, and he was sure right. It’s really difficult to describe, but it’s tender, moist, and has a flavor as though it has been infused with a particularly concentrated chicken stock. And while the skin wasn’t exactly crispy, it and the nice layer of fat were just delicious. I believe I’d buy a SousVide Supreme solely for the way it does chicken.

Well, now I can definitely say that it wasn’t because it was prepared by Chef Blumenthal. You can do this at home with a Sous-Vide Supreme. 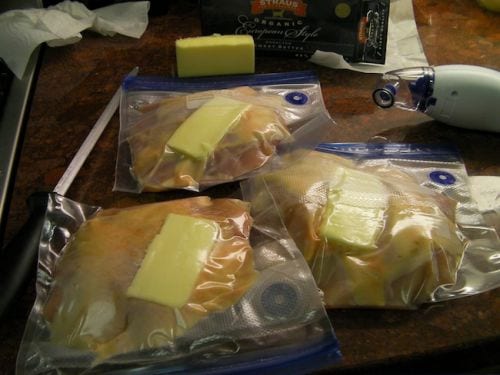 Very simple. A pinch of sea salt & slice of butter in each bag. I had a bit of difficulty getting the pump to get going sucking out the bag but by the third time had figured out the trick of moistening the rubber seal and things went easier.

Then it’s into the water bath. 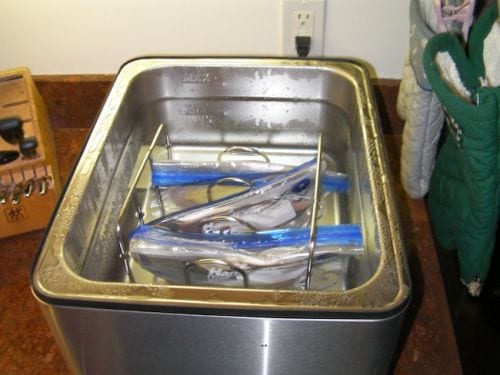 One nice thing is how quickly the water heats up. Of course I began with hot tap water which certainly helps, but I think it was only at around 110 or so and it took only a few minutes to get to 146. And, as advertised, the unit keeps the temperature within 1/3 of one degree F. An hour is all it took to get done, though it’s fine if you leave it in longer. That’s another advantage, you can’t overcook.

Conventional cooking is all about overcooking the outside just enough to get the inside done the way you want it, risking having the inside overdone (dry & stringy) or underdone (crunchy chicken). Here, all you need to do is make sure you leave it in for a minimum amount of time and it’s perfectly moist, tender & delicious. 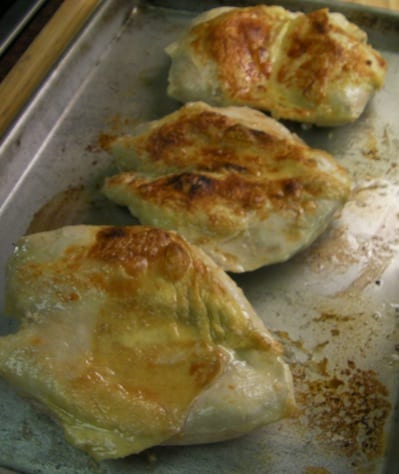 What I did here was to brush the skin with the butter and drippings from the bags and fire them under the broiler for a few minutes. Incidentally, there was only a small amount of moisture other than butter; i.e., the moisture was still inside the meat where it should be. 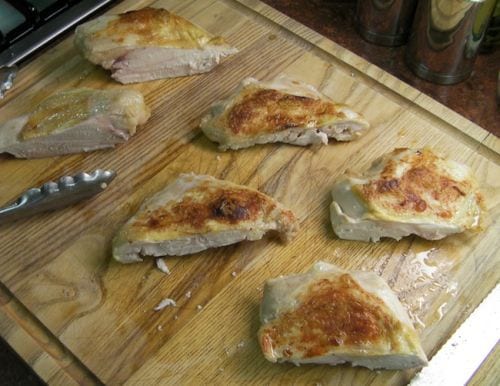 The funny thing is, that probably doesn’t look particularly different or better than any nicely prepared chicken breast. In terms of moisture, texture and taste, however, it is totally superior to any chicken I’ve ever had. In fact, I’ve had chicken — and turkey — that looked fine but was so dry that it made me cough.

Yes, of course I did a sauce. I reduced a quart of quality organic chicken stock to about 1 cup, with 1/2 cube of butter, just a pinch or so of tarragon (less is more with that herb), a bay leaf, and about 3 tbsp of heavy cream. But, I served the sauce on the side so the chicken could be sampled all on its own.

There were four of us and everyone raved. Robert was demonstrating the tenderness by cutting his chicken with a spoon. Bea, uncharacteristically, brought up the sous-vide subject a couple of times today and is anxious for more. Julie did a wonderful salad with bacon bits. I’ll put that up in a separate post over the weekend

I’ll likely be blogging regularly about this cooking method. I want to try pork chops very soon. Scrambled eggs, too, and I’m looking forward to seeing if I can have perfect soft boiled eggs waiting for me in the morning. While I’m looking forward to doing steaks soon, what really excites me about this is doing other kinds of meat & fish — far less expensive than grassfed beef — and attaining a level of satisfaction that rivals your BBQ steak.

The four of us agreed last night that this dish rivaled the pleasure of a perfect medium rare steak. So if I start doing a lot more of this and a bit less grassfed beef I’ll pay for the cost of it in no time.