I began with an entire chicken cut up, vacuum packed and cooked in the Sous Vide Supreme just like the Maiden Voyage. The one difference was that because of the bones, I left it in for four hours. It was still just as moist & tender.

I also decided to go with a treat of actual mashed potatoes instead of the typical celery root, parsnip or some combo. Our guest Julie did the potatoes, with plenty of butter, of course.

To top it off, giblet gravy, which my mom makes and I’ve loved since I was a kid. As always, click the picture for the high quality version. 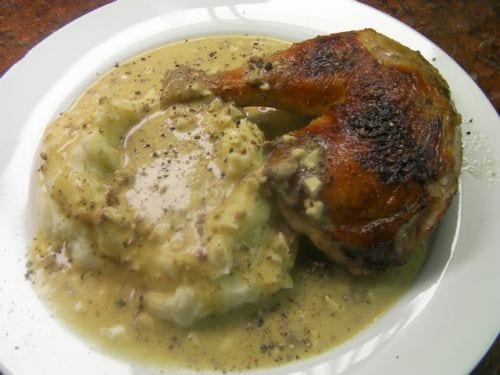 To make the gravy, you first need to chop up the giblets (liver, heart, gizzard) and either roast them under the broiler, or, as I did, sauteed them in butter along with the neck. 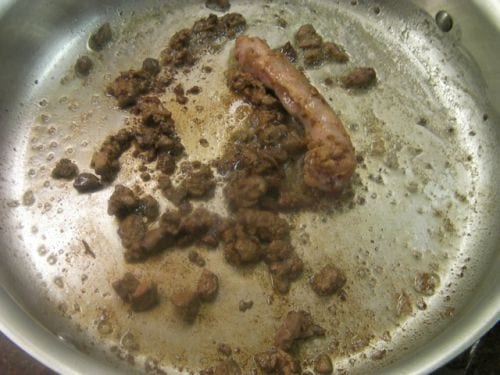 Once nice & browned, add your high-quality chicken stock. If I don’t have my own, I get the free range organic from Trader Joe’s or Whole Foods. I used a quart and then just let it simmer for an hour or so. You want to taste for the watery taste to diminish to nothing. At that point, pull out the neck, let it cool and pick off the meat and add back in. Don’t add salt when you do a reduction, because it will become more and more concentrated. I usually find at the end that I need no added salt. This is also a good reason to use a quality stock as they’re not loaded with salt.

In the meantime, I boiled two eggs, hard. Once the flavor was right, I added about a half cube of butter, and the egg chopped up and the yolk mashed & distributed. Then, just add heavy cream until the consistency is right. I think it might have been 1/3 to 1/2 cup in this case.

Give that gravy a try. Very rich, creamy, delicious and fully of fatty goodness.

By the way, on the sous vide front, check out this writeup in The New York Times. Also, Diana Hsieh posts how she cooked up a storm with the contraption over a week’s time.