Dr. Robert Lustig on Fructose: “Alcohol without the buzz”

Here’s another for those of you with some time on your hands over this holiday season. Once again, I’ve known about this amazing video for some time but just finally got around to watching it yesterday.

In this video Dr. Robert Lustig takes you on an amazing educational journey about sugar and specifically, the vast difference between the two major types in your diet: fructose and glucose (regular table sugar is 50/50). Of the two, glucose probably isn’t that bad when consumed as a starch, whereas fructose is poison, out and out, and it’s every bit as poison in excessive quantities as is alcohol. It’s metabolized exactly the same way, and it’s what’s giving even children fatty liver disease, a precursor to cirrhosis.

Dr. Lustig raises one interesting aspect about obesity being no more complicated than a lack of activity combined with excessive caloric intake. If that’s true he asks, then how it is that he sees so many obese 6-month old infants in his practice? Obese infants; and we’re not just talking baby fat. Maybe here’s a clue? 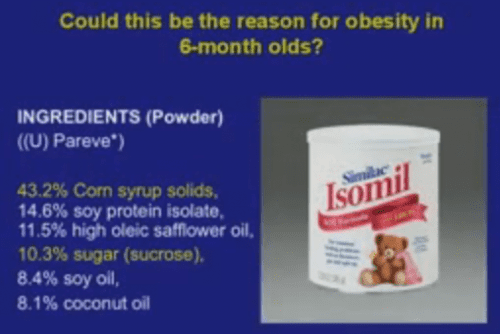 What utter junk-crap-poison to be giving to an infant. You know what girls? If you don’t like breastfeeding then you should not have kids. It’s that simple. Do it right, or not at all. You don’t even have to Google for the composition of human breast milk to know that of the above, only the coconut oil is a wholesome ingredient. The rest is pure garbage that I wouldn’t feed to a mean dog. By the way, just to keep things honest, corn syrup solids are not anything like HFCS. It’s essentially dehydrated regular corn syrup and is almost all dextrose (glucose). As such, it would be far and away one of the better sweeteners to use in cooking, if you must, and far better than even table sugar that’s 50% fructose. But you ought never be giving it to infants and children and especially not as a replacement for, uh…actual FOOD!