Meat may be the reason humans outlive apes

Genetic changes that apparently allow humans to live longer than any other primate may be rooted in a more carnivorous diet.

These changes may also promote brain development and make us less vulnerable to diseases of aging, such as cancer, heart disease and dementia.

Chimpanzees and great apes are genetically similar to humans, yet they rarely live for more than 50 years. Although the average human lifespan has doubled in the last 200 years — due largely to decreased infant mortality related to advances in diet, environment and medicine — even without these improvements, people living in high mortality hunter-forager lifestyles still have twice the life expectancy at birth as wild chimpanzees do.

Here’s one that shows their hunting tactics from above, via infrared.

So what gives, then? Well, perhaps it’s because bi-pedal hominids began using stone tools upwards of 2.5 million years ago and probably longer. In so doing, they were able to scavenge the high density nutrients (fats, mostly) in bone marrow and brains, inaccessible to carnivores.

Then, as Max Kleiber showed in 1947, humans, chimps and virtually all animals follow a linear function of mass to metabolic rate. 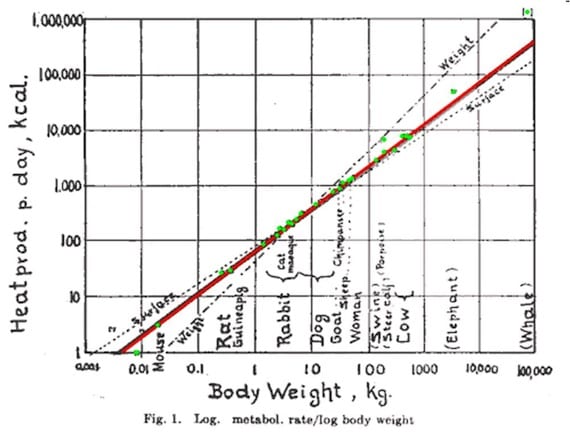 The oldest known stone tools manufactured by the ancestors of modern humans, which date back some 2.6 million years, apparently helped butcher animal bones. As our forerunners evolved, they became better at capturing and digesting meat, a valuable, high-energy food, by increasing brain and body size and reducing gut size.

Now for my first complaint: how come on the one hand it talks about butchering animal bones, leading to capturing and eating meat, yet no mention of fats? What’s inside bones is extremely high in fats. Why not acknowledge that?

At any rate, I’ve posted on Kleiber’s Law and the Expensive Tissue Hypothesis recently, for those desiring more in-depth:

And if you want to really dig deep into it, see Dr. Mike Eades post, Are We Meat Eaters or Vegetarians?

Then we advance to unlock another piece of the puzzle from the original article cited.

One variant found in all modern human populations, known as ApoE3, emerged roughly 250,000 years ago, "just before the final stage of evolution of Homo sapiens in Africa," Finch explained.

Well that’s all well and interesting, but I’m not sure how well that hypothesis (that ApoE3 arose primarily in response to parasites from uncooked meat) would stand if it turns out we began cooking much, much earlier (Is It The Meat, or Cooking The Meat?), maybe even at the advent of homo Erectus 1.8 million years ago. We do know from even modern hunter-gatherers that cooking vessels aren’t needed, that the meat is often just tossed in the fire and retrieved to eat. Speculating, could we have gotten a taste for cooked meat very early, say, from scavenging meat burned during a quick forrest or brush fire ignited by lightening?

But I’m getting a little suspicious. Is there a "meat is inherently unhealthy" bias, and we had to evolve ways to not die from the very thing that they just claimed made us human in the first place…? Does this not strike you as somewhat circular? I mean, it couldn’t possibly be that we evolved to live longer than apes naturally (all else remaining equal) because of numerous factors, evolutionary pressures, surviving great odds against us, and/or that there’s one hell of a lot more bioavailable nutrition in a diet of cooked meat, fat, vegetables, fruits & nuts than, say, cellulose?

Is this yet another example of unbridled reductionism — that it’s necessary to find a single magic switch in a gene that protects us from awful meat & animal fat? Well, I suppose that’s where you have to look if you accept the premise.

So now for the obligatory anti-meat & animal fat part, signaling the bias I was beginning to detect.

"I suggest that it arose to lower the risk of degenerative disease from the high-fat meat diet they consumed," Finch told LiveScience. "Another benefit is that it promoted brain development."

Curiously, another more ancient variant of apolipoprotein E found in a lesser degree in all human populations is ApoE4, which is linked with high cholesterol, shortened lifespan and degeneration of the arteries and brain.

Yep, that’s what it looks like to me. The very thing that drove our evolution profoundly forward is a-priori unhealthy and instead of wiping us out, we eventually developed a coupla genes that keep us alive (and for longer than our ancestors!). But, if I get the implication right, do lower your meat, animal fat consumption, and of course, watch your cholesterol!

That’s my take, anyway. Anyone see it differently?