You might have to put up with me on this for a while because I’m becoming more excited about this by the day. I blogged of the chicken experience the other day, first use of the Doctors Eades’ Sous-Vide Supreme (which is an engineering work of art, I think). That was the night before we left for the holiday. Upon our return on Sunday we were invited to dinner down the hall and I decided to contribute by cooking a couple of the Ultimate Grill Steaks from La Cense.

I already knew that the published cooking temperatures are way too high for pretty much all applications; this, due to liability concerns, i.e., sharks in suits euphemistically referred to as "lawyers" who hide behind platitudes of "truth & justice" in order to wreak predatory havoc on a gullible populace who believes themselves "protected" from big bad business.

At any rate, the meat came out way over done and lost way to much of the juices when I sliced them up for presentation & serving. Even though the published temps for medium rare are 136 and I used 130, still way to much. When I cook meats to medium rare using a temperature probe, I usually take it to 122. So, my next beef attempt is going to probably be at 120.

So, last night I did salmon. 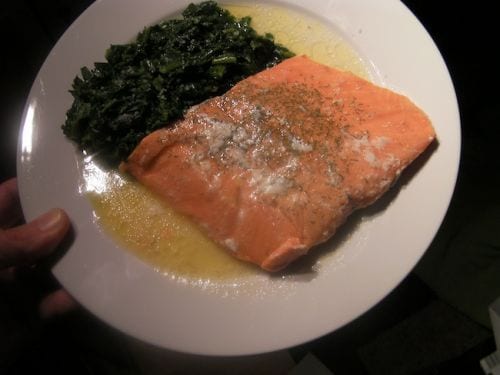 The temperature chart calls for 140F for 40 minutes. I knew that the San Francisco presentation I attended used 122 for 40 minutes and I had heard of it being done as low as 113 for 40. I chose 120 for 40. I also prepared a brine solution of 1 Qt water to 1/2 cup salt and submerged the fish for 10 minutes.

In addition to the salmon I added a healthy pat of organic butter, a pinch of dill, and not having any fresh lemon I added a couple of squirts of juice from the plastic lemon.

To serve, I simply unloaded the bag right onto the plate, juices and all, and added a small pinch of sea salt. Notice how the butter is yellow, still. That’s because near as I can tell, every drop of moisture is still packed into the meat. Again, it’s difficult to describe because it’s so unlike any salmon I’ve ever had. It’s not flakey, which, I think is because so much juice get’s lost. It’s more like a firm pie filling. So moist & tender. Bea said it was the best salmon she’s ever had, "truly."

While I haven’t delved into it, I did come across this work in progress, A Practical Guide to Sous Vide Cooking.

I believe that tonight I’m going to try my hand at an egg concoction or two.