I increasingly can’t get enough of this. And I’ll be at it again tonight — ribeye steaks for dad, I think.

Two evenings ago I decided to try the scrambled eggs. I got the desired custard consistency. Unfortunately I did not get a photo as the four servings were gone immediately. I did them precisely to Dr. Mary Dan Eades’ specifications, except that in addition to the truffle salt I also had a bit of truffle butter and put about 1/4 tsp in each batch. Go take a look at how they look.

Actually, we had a friend arrive just as I was plating so we made five servings of it and unsurprisingly, everyone loved. My wife was very wary of it, as she loathes runny scrambled eggs and always looks waitresses right in the eye and repeates herself: "WELL DONE!" Well, she loved these too, so that’s quite a testament.

Right after that I put the grassfed Bavette (flap steak) in at 125 for an hour with a bit of a dry rub and then browned in the cast iron skillet in ghee brought to super heat. 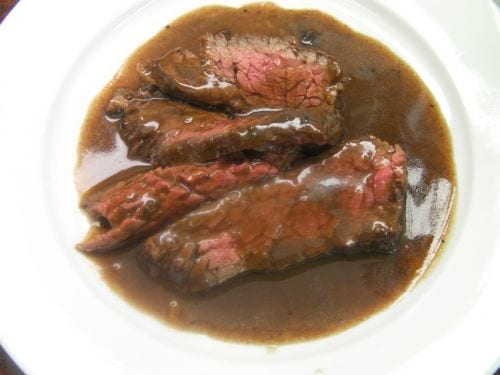 Yes, that’s my bone stock reduced with a good amount of butter. Needless to say it was excellent. Last time I did Bavette, we had leftovers. Not this time. Bea & I finished it off. Also, if you look at that last instance, you can tell the difference in the texture of the meat between the grill and sous vide.

This brings me to another issue, and that’s mess. One nice thing about sous vide cooking is that it’s so clean, and I must say that I love the way the SVS’s lid doubles as a drip tray. However, when I finished this bavette in the cast iron skillet in ghee, half the kitchen was splattered with ghee and it was an awful cleanup job for Bea. In addition, I really don’t like getting oils that hot for that extended an amount of time; plus, I prefer the burnt flavor of the milk solids in butter and you just can’t get it hot enough to do a good finishing job without over burning the butter. You could use the broiler, but then you’re introducing a lot of ambient heat that’s going to overcook the inside. What to do?

So, I got myself a kitchen torch from Sur La Table yesterday and employed it on the pork chops you’ll see in just a moment. Wow, what an improvement. Super clean. There was almost nothing to clean up after dinner. 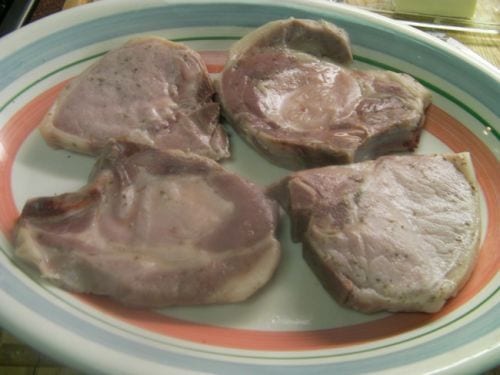 As you can see, after coming out of the 141 bath for an hour, they don’t look that appetizing. Oh, by the way, the SVS guide called for 4 hours but looking around I saw recommendations to brine in an 8% solution (5 tbsp salt per quart) for 1-2 hours. I let it sit in the brine for an hour-15 while I got my pears going in the SVS at 183. 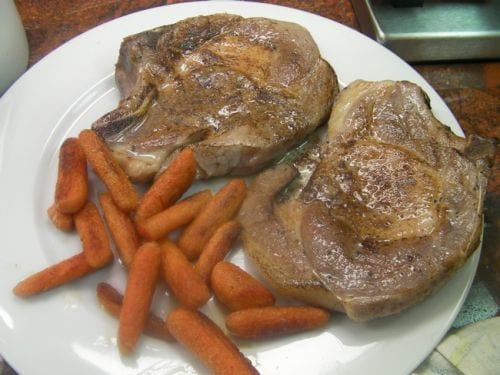 I just rubbed each side down with a stick of butter and torched. It only takes about 30 seconds per side and you can char the fat a bit, too. Oh, make sure you do this on your stove top with the fan on high. Yep, I set off the smoke alarm.

Here’s a look inside. 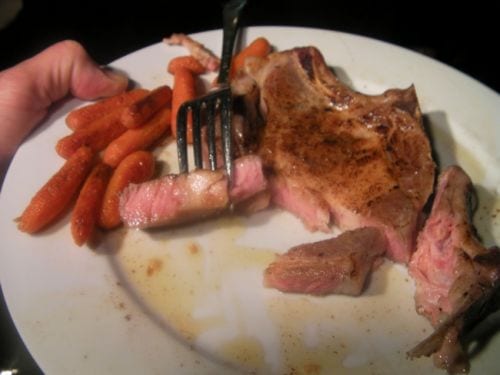 To say that was the most delicious pork chop I have ever had would be a gross understatement. In fact, for the very first time I ate all the fat — every bit of it — as it was delicious, like some cross between bacon & pork belly. And don’t let the pink fool you. I have had medium rare pork cooked conventionally (tenderloin) and don’t care for it. This is pink but the texture is definitely medium. It’s just a different experience. So moist & tender.

Now I had to improvise here with the pears. After having the pear and a shot of brandy in the SVS for a little over an hour I had to get the chops going, so I moved the pears to a dutch oven filled with water at 183 from the SVS (I needed to get the temp down to 141 anyway) and into the oven set to warm at 180. So, by the time we finished dinner and cleaned up, pears were done wonderfully. I simply sliced them up, dumped the brandy and juices into a saute pan and finished off the pear slices with those juices and butter, reduced to a nice syrup. Then I sprinkled with cinnamon & nutmeg. Delicious. 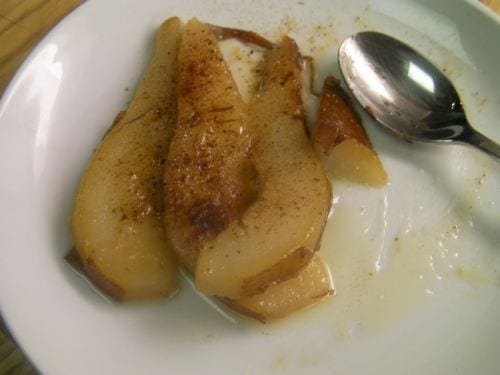 By the way, perhaps you wish to try sous vide before spending $450 on a Sous Vide Supreme. Or, perhaps that’s not in your budget and you need a lower entry point. Well, Mike Eades has a post describing how they first experimented on the cheap, and I mean real cheap. You’ve probably already got everything you need. Alternatively, here’s a guy who got set up for around $280, including the FoodSaver. Many already have that as well as the required crock pot or rice cooker.