For what reason I don’t know, but this January 2009 editorial by William Faloon of the Life Extension Foundation is making the rounds. Perhaps it just came available on the web.

It’s a good read, particularly in light of the billions and trillions of dollars the thieves & thugs in DC are about to flush down the crapper on your behalf. Some notable excerpts.

A large number of new vitamin D studies have appeared in the scientific literature since I wrote my plea to the federal government. These studies don’t just confirm what we knew 16 months ago—they show that optimizing vitamin D intake will save even more lives than what we projected.

Each year, about 157,000 Americans die from coronary artery disease-related heart attacks. Based on this most recent study, if every American optimized their vitamin D status, the number of deaths prevented from this kind of heart attack would be 92,500.

To put the number of lives saved in context, tens of millions of dollars are being spent to advertise that Lipitor® reduces heart attacks by 37%. This is certainly a decent number, but not when compared with how many lives could be saved by vitamin D. According to the latest study, men with the higher vitamin D levels had a 142% reduction in heart attacks.

The evidence supporting the role of vitamin D in preventing common forms of cancer is now overwhelming.

Vitamin D-deficient women, for example, have a 253% increased risk of colon cancer. Colon cancer strikes 145,000 Americans each year and 53,580 die from it. Based on these studies, if everyone obtained enough vitamin D, 38,578 lives could be saved and medical costs would be reduced by $3.89 billion.

A study published in January 2008 showed that women with the lowest level of vitamin D were at a 222% increased risk for developing breast cancer. Most studies show that higher levels of vitamin D can reduce breast cancer incidence by around 30-50%.

Each year, approximately 186,800 women are diagnosed with breast cancer and 40,950 perish from it in the United States. This needless toll of suffering and death caused by insufficient intake of vitamin D is unconscionable.

Prostate cancer will be diagnosed in an estimated 189,000 American men this year. Almost 30,000 will die from it. Men with higher levels of vitamin D have a 52% reduced incidence of prostate cancer.

The doctors who conducted this study concluded: “Low levels of 25(OH)D and 1,25(OH)2D are independently predictive for fatal strokes, suggesting that vitamin D supplementation is a promising approach in the prevention of strokes.”

Vitamin D seems to reduce the risk of almost every killer disease of aging. In fact, a recent study shows that humans with low vitamin D status are twice as likely to die over a seven-year time period!

That’s a lot of quoting, but there’s a point to it. This weekend while researching the vitamin D connection to various forms of heart disease (post forthcoming) I found this figure. on the Grassrootshealth website. Click to enlarge, or access the PDF here. 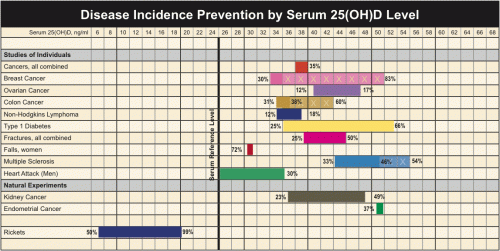 All percentages reference a common baseline of 25 ng/ml as shown on the chart.