Did you feel “Tied to The Whipping Post” in 2009, Maybe by the Alphabets…
Progress on Paleo in Mainstream Press; Hedging in the Literature

A pretty amazing year for the blog. I’m pleased, humbled and thankful to the growing numbers of readers, commenters and those telling friends, family and co-workers about their own experiences and passing along the blog address.

Thank you. Without you, there’d be nothing to do or see here. Instead, here it is, in a picture. 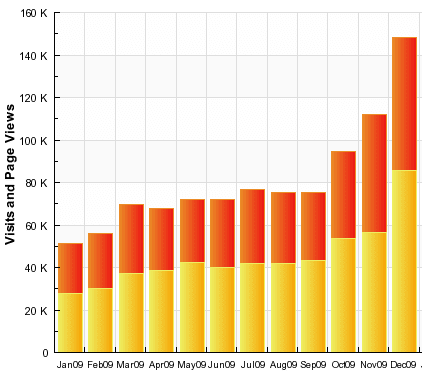 December was another record month with 86,600 visits and 148,000 page views, and by a significant margin. Well, there’s some serendipity to that, and it happened on the very last day of the year. Turns out that easily the most popular post I’ve ever produced is the one a few days back I didn’t want to write, about going soap and shampoo-less, washing only with water. I resisted writing about that for some weeks, so I suppose it just goes to show that big things are more likely to happen when you get out of your comfort zone. Being comfortable just may be the chief thing holding you back.

Early in the day on December 31st it looked like I was going to finish the month with pretty much the same numbers as in November, which was fine considering the holiday season. And then the very popular boingbong.net, and then Fark.com picked up on the no-soap post and, well, it was good for about an additional 30,000 visits in a single day, and bout half that New Year’s Day. And then this morning I wake up to an email from a editor of a print & online magazine with a circulation of about 50,000, wanting to pay me a modest sum to produce an article on the no-soap thing. I’ve agreed, so we’ll see what comes of it.

Bizarre. Here I pour heart and soul into a blog producing all manner of posts about diet, exercise, intermittent fasting, weight loss, health improvements, nutrition, cholesterol, vitamin d, vitamin k2, and what does everyone want? They want to know what it’s like to go soapless. You couldn’t make this stuff up. Life is truly stranger than fiction. But you know what? I’ll go there willingly. If that’s what it takes to spread the message for sound paleo living, then let’s do it.

OK, so for the year in total, it comes to around 550,000 visits and 1,050,000 page views. You’ll often read people tout their "hits" rather than visits and page views. A hit is merely a count of each file that gets served up whenever the blog is visited (and a page typically consists of a bunch of files). So, if I wanted to impress you on that score, then December saw a total hit count of: 3.5 million. Another stat that’s often not given is that of absolute unique visitors. December saw 48,000 uniques. And if I include search engine traffic to the blog, then instead of 86K visits, it’s just over 100,000 visits in December.

So there’re the numbers. I’m going to strive for continued growth in 2010, I’m going to really get busy on a book with a unique and fresh perspective on paleo living, body, mind & soul; and I’m going to keep my responsibility in mind, more now than ever.

I do have one decision to announce, and that is that while this is going to disappoint some, I am going to have to tone down the rants and especially the foul language. Here’s why: while I know it’s entertaining for some, I have concluded it’s most likely a rather vocal minority (and bless your hearts). But the bigger reason is that the ranting and foul language inhibits the wider distribution of this blog — by readers more sensitive to that — to their friends, family and co-workers. I simply can’t abide that. I’d hate for someone not to get a decent introduction to paleo living because I felt like an entertaining rant of f-bombs. So, sorry for that, but I will still endeavor to make my commentary as sharp, biting, sarcastic and taunting as ever. Yes, we will still name names as per policy.

Here’s wishing a happy and prosperous 2010 to all.