Chicken, Mashed Potatoes & Gravy (and how bad are carbs?) 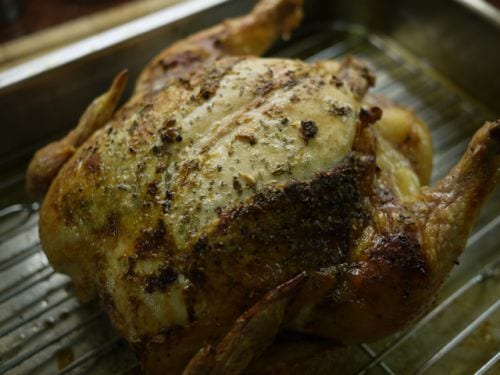 While it was baking I took quite a lot of chicken stock, added butter and just a sprinkle of tarragon and reduced it to a decent chicken gravy with just a tsp of potato starch to thicken. Then I made up some potato puree in the food processor with even more butter & heavy cream. 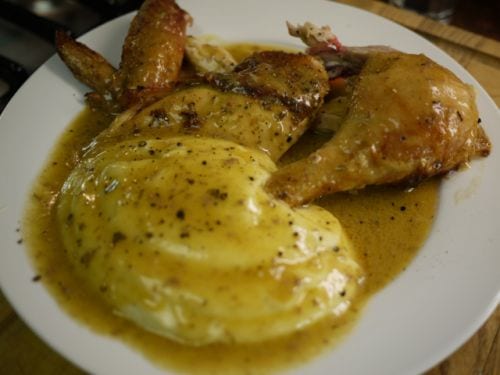 So, many may have noticed that I’ve upped my carbohydrate considerably over the last few months. You can consider it another self experiment. After all, it’s a long time I’ve been writing that paleo is a dietary framework, a foundation. It’s not a prescription. It’s principles that are to be applied individually, and so the dietary makeup is going to differ individual to individual. But what if it also differs depending upon where you are? Are you fat or lean? Are you diabetic or borderline? Are you hungry all the time or never hungry?

paleo is real foods only (unrestricted meat, natural fat, veggies / roots / tubers; moderate nuts and fruit in-season). But it’s often construed to mean low-carb. Well, it’s zero carb or near. But it’s also 70% carb like the Kitavans do. What works for you? Where are you?

And also, in the blogosphere, you have a Peter at Hyperlipid on the one hand, who’s pretty paleo in his food choices, but very high fat and only enough carbs to keep out of ketosis (and very moderate protein). And then you have [redacted], who’s a bit anti-low carb, but down on refined sugar — especially fructose — and frankenoils, and bullish on eating enough, in both calories and carbs. And you have the meat only zero carbers, WAPF, and a lot of folks in-between.

So how about you? For myself, now that I’m near an ideal weight at 175 (I might get to 165 — we’ll see), I’m never really hungry, and I’m looking to add some carbs. I love potatoes & other roots, so that’s the primary means. Not being hungry for at least a year now, has, I think, caused me to eat less than I perhaps should, and perpetual cold hands & feet and bad moods was the signal. My solution, that seems to be working, is that I have boosted both the fat & carbs in my meals and reduced the protein. Where I used to have a whole huge steak and salad, I now prefer a smaller steak, lots of very fatty sauce, and some sort of starch. Then I’ll have "nut soup" for dessert. I’ll blog that soon.

But if you’re still fat, and/or hungry all the time, I’d stick with very low carb, combine intermittent fasting, and of course get those brief and intense workouts in. That should reverse your leptin resistance. I suspect that if you can get to where you eat a good LC, high fat dinner and then not be hungry enough to eat again until 10 or so the next day (12-15 hour overnight fast) that you can be home free. But you may not want to take it too much farther. Maybe slow it down at that point. Experiment with adding starches. It’s going to be a different level for everyone, and don’t do the same thing all the time. It should average out. It’s fine to eat a zero carb meal. But it’s fine to eat a meal with a relatively high level of starch, if your body handles it. I got a bit tired early after that meal last night, which is very uncharacteristic, so that amount of starch was perhaps a bit much for one shot. So now I’m zeroing in on my upper limit and I’ll back off from there. I should also point out that I don’t have starch with every meal, or even every day. Intermittency, variety and randomness is a very important paleo principal.

And how about you? The discussion is open.