Before I begin, I’ll simply point you to part one of the series and you’ll find the links to all the other parts there.

So it’s time to discuss the "science" behind the idea that saturated fat intake leads to heart disease. Let’s begin with pure observational epidemiology and then move on to the more solid prospective studies. For the first part, I’ll just point out that I’ve posted on it a number of times before (here’s a search link for those who wish to scour). Here’s a few I picked out.

Here’s pretty much what it always looks like. Does it mean more saturated fat is necessarily better? No, but that’s not the point. The point is to generally falsify the notion that it’s independently bad for you. 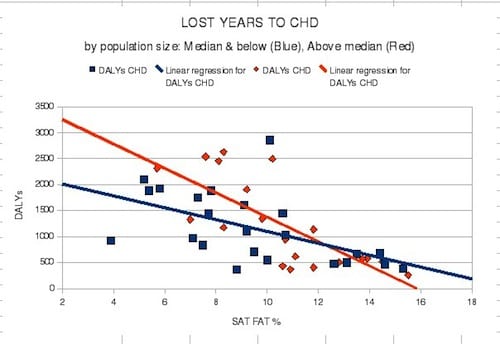 There just doesn’t seem to be any way to make a positive correlation; unless, of course, you cherry pick your data like Ancel Keys — aka The Fraud — did. The other part of the epidemiology is the supposed association between dropping rates of heart disease death and the decrease in saturated fat consumption.

Indeed, heart disease deaths have decreased as one can see from the graphs here and here. But why, and how about incidence? See, a decrease in deaths can be caused by a number of things and while incidence is fraught with bias and subjectivity (in diagnosis), I can’t find anything to suggest that the incidence of heart disease has decreased at all. Dr. Stephan Guyenet, who was kind enough to correspond with me on this issue wrote in an email:

Keep in mind these are death rates, not incidence rates. CHD deaths have decreased considerably since the 50s-60s, but incidence hasn’t changed much if at all. We’re having heart attacks but not dying of them, due to better emergency services and treatments (refs in Colpo’s book). They didn’t graph the CHD line going back beyond 1950, but they did collect data on it and it dwindles to near zero around 1920 (graph available in Colpo’s book; I reproduced it in that post on my blog).

The other thing to keep in mind is that the U.S. doesn’t collect unbiased stats on CHD incidence that I know of. These data depend on diagnosis by a physician, which is highly subjective. The UK autopsy studies I cited in my post are less biased, and thus much more solid. I think they’re worth mentioning, at least for comparison.

He’s referring to Anthony Colpo’s amazing book: The Great Cholesterol Con. And here’s what the CDC says concerning the decline in deaths:

A mixed bag (those numbers refer to the references at the link), so it’s completely wrong headed to believe that a decrease in saturated fat consumption is a major factor, if any factor at all.

So let’s move onto a study of studies. A summary, or "meta-analysis" is where they take a bunch of studies and essentially do a study on the studies. This is a good method because it tends to wash out outliers in either direction. It’s a way to get tons more data, which makes statistical conclusions more valid (or less BS, perhaps). In this case, it’s epidemiological, still, but this tends to give a bit more confidence.

Before showing what was found, it’s appropriate I think to point out that epidemiological or observational studies ought to be used for one and only one thing: forming reasonable hypotheses — hypotheses which you then go test with real, intervention, controlled studies where different groups get different things over hopefully a long period and you analyze the results.

After examining 28 prospective epidemiological studies, the researchers reported that:

"Intake of total fat was not significantly associated with CHD mortality…" (p. 175)

"…fatal CHD was not reduced by either the low-fat diets… or the high P/S diets [diets high in polyunsaturated fats and low in saturated fats] …". (p. 188)

"There is probably no direct relation between total fat intake and risk of CHD."

Now let’s move onto some independent prospective studies. In pure observational epidemiology, they simply "find" associations. The problem is that there’s lots and lots of associations if you look — and the more you look, the more you find — and picking out stuff to check for associations is bias in and of itself. You could find dozens of them amongst people who get and die from heart disease. What if you found, for instance, that more left-handed people die from heart attacks than right handed people? How about toilet paper use, or cosmetics, or any number of other things? The truth is, you pick what you already think might be suspect. And the thing is, the general population seems to glom onto observational studies more than all else. They’re simple to understand and easy for the sensational idiots in the press to make a scare story of.

Back in December Dr. Stephan Guyenet posted a review of his own concerning prospective studies. He says:

The diet-heart hypothesis is the idea that saturated fat, and in some versions cholesterol, raises blood cholesterol and contributes to the risk of having a heart attack. To test this hypothesis, scientists have been studying the relationship between saturated fat consumption and heart attack risk for more than half a century. To judge by the grave pronouncements of our most visible experts, you would think these studies had found an association between the two. It turns out, they haven’t.

The fact is, the vast majority of high-quality observational studies have found no connection whatsoever between saturated fat consumption and heart attack risk. The scientific literature contains dozens of these studies, so let’s narrow the field to prospective studies only, because they are considered the most reliable. In this study design, investigators find a group of initially healthy people, record information about them (in this case what they eat), and watch who gets sick over the years.

You can go over to his post to look at the actual studies, as well of a couple of review studies he points to drawing essentially the same conclusion he does:

Over 25 high-quality studies conducted, and only 4 support the diet-heart hypothesis. If this substance is truly so fearsome, why don’t people who eat more of it have more heart attacks?

This is it, folks: the diet-heart hypothesis ends here. It’s been kept afloat for decades by wishful thinking, puritan sensibilities and selective citation of the evidence. It’s time to put it out of its misery.

Finally, there’s something new that just hit the medical journals and has been blogged pretty extensively. In The American Journal of Clinical Nutrition:

Background: A reduction in dietary saturated fat has generally been thought to improve cardiovascular health.

Objective: The objective of this meta-analysis was to summarize the evidence related to the association of dietary saturated fat with risk of coronary heart disease (CHD), stroke, and cardiovascular disease (CVD; CHD inclusive of stroke) in prospective epidemiologic studies.

Design: Twenty-one studies identified by searching MEDLINE and EMBASE databases and secondary referencing qualified for inclusion in this study. A random-effects model was used to derive composite relative risk estimates for CHD, stroke, and CVD.

Conclusions: A meta-analysis of prospective epidemiologic studies showed that there is no significant evidence for concluding that dietary saturated fat is associated with an increased risk of CHD or CVD. More data are needed to elucidate whether CVD risks are likely to be influenced by the specific nutrients used to replace saturated fat.

Next I will speculate about what I think really contributes to heart disease.

1/20/2010: Stephan, this morning, posted on yet another paper by Krauss, just out. This one focusses on intervention studies.

In summary, although substitution of dietary polyunsaturated fat for saturated fat has been shown to lower CVD risk, there are few epidemiologic or clinical trial data to support a benefit of replacing saturated fat with carbohydrate. Furthermore, particularly given the differential effects of dietary saturated fats and carbohydrates on concentrations of larger and smaller LDL particles, respectively, dietary efforts to improve the increasing burden of CVD risk associated with atherogenic dyslipidemia should primarily emphasize the limitation of refined carbohydrate intakes and a reduction in excess adiposity.