From my post yesterday at the never-ending Amazon discussion forum focussing just now on The China Study author, Dr. T. Colin Campbell, and his insistence that we need to at least try his no-added-fat plant-based diet.

…Never tried it, and I stated so long ago, back around the last time these discussions heated up. And I never would and, of course, why would I? I’ve achieved marvelous results as I’ve pointed out too many times.

Look, I’m not going to question that Dr. Campbell’s chosen foods work well for him. I believe it. I believe it can be workable, perhaps ideal for others. I’m not in the least threatened by that. But Dr. Campbell seems threatened by the notion that a WHOLE FOODS eater that includes lots of meat (and sauces from marrow bone & chicken broth I make myself) is just as health and well-being promoting. He doesn’t seem to get that the most likely explanation that his diet, Ornish’s and mine can prevent and reverse heart disease (see Dr. William Davis’ Track Your Plaque website) is because they all have one thing in common: elimination of modern processed foods.

I wholeheartedly agree with the Doc on that point, and we really ought to get on that focus. It’s just like Pollan. I respect him immensely for the education work he does. But mostly plants? Nope. Mostly meat for me. It’s the crap, folks. It’s that crap "food" of modernity, and even the Chinese eat it. Hell, I lived in Japan for 5 years in the latter half of the 80s and they too were already very big into junk. I used to joke (but it’s true) that you could sit at the window in a McDs in Tokyo and see 1-2 other McDs down the avenues.

Here’s real food. First, you take care and prepare it yourself. 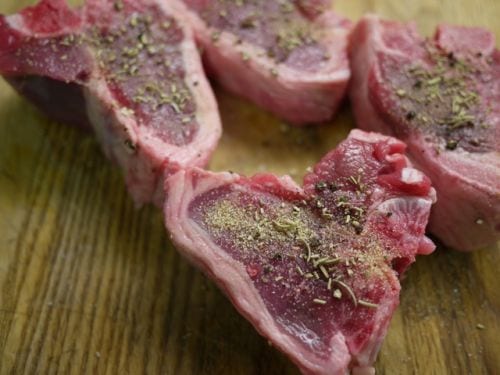 A little seasoning, rosemary, and you’re on your way. Gather some veggies and cook them up in high quality pastured butter for Christ’s sake. I kinda got carried away with the reduction  of the bone marrow stock on this one, a bit too thick but tasty and densely nutritious nonetheless. I did these sous vide, but unfortunately it was a while back and I can’t recall what temperature and time I used. 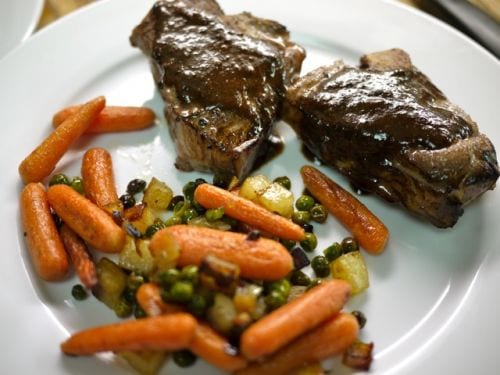 Now I ask you, is this really the sort of thing that’s destroying America’s health, or, is it more likely something like this? 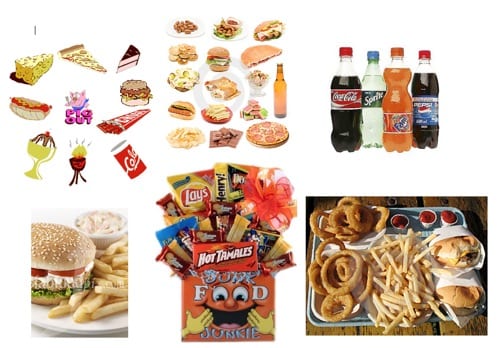 And have you seen the blog by the school teacher who’s eating the school "lunches" every day for a year and photographing the "meals?" Go check out Fed Up With School Lunch, but you’d better not have recently eaten. And hey, if ever you’re fasting, get hungry and need a helping hand to completely lose your appetite, just keep that site bookmarked. Here’s a sampling of school lunch "food." 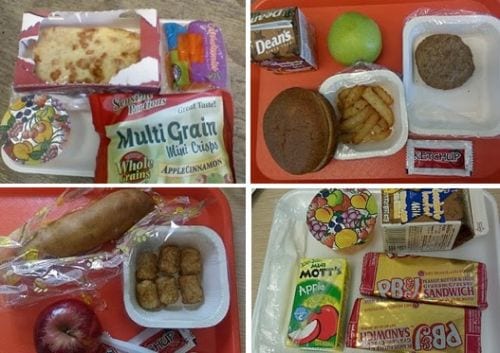 That crapshit makes airline food look gourmet. You know, when I was in grade school I did my time in the kitchen, and it was a real kitchen with real laddies cooking hot meals each and every day. There was always real meat, real vegetables, and so on. It was served from the lunch line onto plates with spoons, forks & tongs, not in sealed containers. Disgusting. And look how we generally fare in comparison to school lunches from around the world. Or, how about this one, from France. 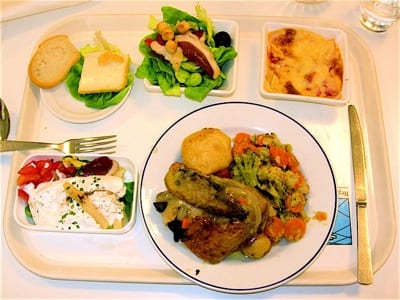 As the author of the article where I nabbed this photo identifies, "In France, schoolchildren are served guinea fowl instead of chicken nuggets." And she goes onto describe her experience.

At one school, students were served a choice of salads — mâche with smoked duck and fava beans, or mâche with smoked salmon and asparagus — followed by guinea fowl with roasted potatoes and carrots and steamed broccoli. For dessert, there was a choice of ripe, red-throughout strawberries or clafoutis. A pungent washed-rind cheese was offered, along with French bread and water. Yes, the kids took and ate the cheese. […]

In addition to the goodness of the food, there were other good things about these school lunches. First of all, they weren’t rushed. About two hours are given for lunch, a portion of which is used for very loud and active exercise. Second, they were civilized. Food was served on heated plates; real silverware and glasses — not plastic — were used; and the lunchrooms were pretty and comfortable for the kids. […]

What impressed me most of all about the French school lunch was not just the deliciousness of the food, but that everything about it — the brightly decorated lunchrooms, the gorgeous kitchens, the lunch moms, the chefs — sent such a deep message of caring. To my ears it fairly screamed, “We care about and love our children. They are us, after all, and we want them to eat well and be nourished.”

Unfortunately, that is about the last message American school lunch sends to our children. Instead, we’re saying, “We have to feed you something; it’s gotta be cheap, and we don’t really care about it or you.” This doesn’t mean that those who put the meals out feel that way, but they are mostly given nothing to work with, be it pots and pans or the knowledge about how to do things, like ripen fruit so that it tastes good when it’s offered.

Shameful, isn’t it? …and by that I mean just doing an all-around crappy, not even half-assed job. You know what I think about the state, in general, but everyone with anything to do with this disgraceful mess ought to be made to eat this school lunch crap 365×3 until they clean up their act.

Sticking with France for a bit — since I lived there and understand very well the French relationship with food — I was happy to have been sent this article in Time by a reader: School Lunches in France: Nursery-School Gourmets.

"The food is very good, Madame. The meat is 100% French," the official said, picking up a brochure from her desk. I knew this brochure well, having e-mailed it to friends in the U.S. last year as a this-could-only-happen-in-France conversation piece. It lists in great detail the lunch menu for each school day over a two-month period. On Mondays, the menus are also posted on the wall outside every school in the country. The variety on the menus is astonishing: no single meal is repeated over the 32 school days in the period, and every meal includes an hors d’oeuvre, salad, main course, cheese plate and dessert. […]

I finally saw the system in action earlier this month. Caught short by a sick nanny, my son, who was accustomed to eating leftovers from the refrigerator, sat in silence with his 25 classmates at tables in the nursery-school cafeteria, while city workers served a leisurely, five-course meal. One day, when I arrived to collect him, a server whispered for me to wait until the dessert course was over. Out in the hall, one of the staff shouted for "total quiet" to a crowd of 4-year-olds awaiting the next lunch seating. "I will now read you today’s menu," he told them. "First, you will begin with a salad."

Americans struggling with obesity epidemics have for years wondered how the so-called French paradox works: How does a nation that ingests huge quantities of butter, beef and cakes keep trim and have such long lives? It could be the red wine, as some believe. But another reason has to be this: in a country where con artists and adulterers are tolerated, the laws governing meals are sacrosanct and are drummed into children before they can even hold a knife. The French don’t need their First Lady to plant a vegetable garden at the Élysée Palace to encourage good eating habits. They already know the rules: sit down and take your time, because food is serious business.

And that’s it folks. Food is serious business. It’s your first line of "pharmaceuticals" and the way we’re doing it here is about like feeding kids the equivalent of crack, by comparison.