“The Miracle of Vitamin D” (and the common cold)

The title refers to an article in The New York Times by our favorite chubby-faced purveyor of conventional “wisdom” (Modern Ignorance): Tara Parker-Pope. I’ll get to that later.

…In the meantime, a bit of a personal anecdote. I don’t recall exactly when I began taking vitamin D supplements, but it was likely around mid-2008. I have not had any illness since, except two colds and two events that initially presented as cold-like but went away in under a day.

The first was in late December, 2008, a little over a year ago. While driving down to SoCal for Christmas I had that unmistakable feeling in the back of the throat that a cold was coming on. In addition to the normal 6,000 IU of D I take, I took an additional 12,000 IU upon arrival. When I woke up the next morning, I had mild but certain cold symptoms, so I took another 12,000 IU. Symptoms improved, then got a little worse later in the day so I took another 12,000 IU in the evening. I repeated this regime the next day and by the the start of the day after, all symptoms had either vanished or gone to that sort of wrap up stage. Colds have always taken me a week to two to pass, and I often have a lingering sore throat for days after that due to the irritation from continual post-nasal drip.

Sometime in late February I got tested by GrassrootsHealth, and then Kaiser a few weeks later. The first test was right after a week of hours spent per day in the Puerto Vallarta sunshine in shorts, shirtless. I tested at 120 ng/ml. The next test came back at 85. Then this fall, six months after the first, I got another test from GRH that came in at 104.

In late November during the Thanksgiving holiday — again, in the company of many people — I began to get some almost imperceptible cold symptoms that went away in under a day. Same at Christmas. It was a slight scratchy throat, mild cough, and then was gone. My wife, who also supplements with D, unfortunately had it for weeks. However; from my perspective, her symptoms — mainly a cough — were far milder than a normal full-blown cold.

Now, fast forward to last Friday and Saturday night. Both evenings I was in the company of people and drinking quite a lot (whiskey), because they were both birthday celebrations for me. Sunday morning we went to breakfast with some friends and upon returning, Robert hears me cough and lets out an uh-oh. I brushed it aside as just a little throat clearing. But he was right. By the evening it had come on like a freight train. Huge coughing and unbelievable quantities of choking mucous. I probably took an additional 20,000 IU of D. Then Monday morning I felt like crap, so I took another 12,000 IU. Took another 12,000 that night and I didn’t sleep well. Yesterday morning I got up with an awful sinus headache that made even my jaw & gums hurt. I took another 12,000 IU and figured that by this time the symptoms were so bad that I was probably in for the long haul.

And then 2:00 PM hit, I let out a big sneeze, realized my headache was clearing immediately and suddenly I had nothing but a mild scratchy throat, and I felt fabulous. I mean, I felt off-the-charts great — as though I’d just come in from a day at the beach. There was a euphoria to it that persists even now. I slept like a baby last night, a good 8 hours and I just got back from a great, intense workout at the gym.

Can any of you report similar experiences?

So, back to the ditzy blonde. Here’s what she has to say.

But don’t start gobbling down vitamin D supplements just yet. The excitement about their health potential is still far ahead of the science…

Although consumers may be tempted to rush out and start taking 2,000 I.U.’s of vitamin D a day, doctors warn against it….

…In general, people are considered to be deficient if they have blood levels below 15 or 20 nanograms per milliliter. But many doctors now believe vitamin D levels should be above 30. The ideal level isn’t known, nor is it known at what point a person is getting too much vitamin D, which can lead to kidney stones, calcification in blood vessels and other problems.

Dumb, dumber, dumbest. Ignorant to the level of embarrassment. Did she even bother to check Vitamin D Council? How about with the world’s top vitamin D researchers, like Bruce Hollis or Robert Heaney? No. The ditz talked to some cat who studied E and selenium, and some chick in the Bronx.

Or, does she tap the already documented research of both Vitamin D Council (link) or GrassrootsHealth (link)? No, she taps some doc who appears to not yet know much about vitamin D, and, OMG, is gonna do a study, by golly! While I applaud that, as well as the professional skepticism of anyone doing research, I really loath these sorts of MSM watered-down garbage that amount to: “Not so fast! Wait; caution; heed the experts!” “Doctors warn against it.” And how many of them are just ignorantly talking out their ass in order to get their names in the NYT?

Yea, well, Tara, your face is pale and fat. Nobody ought listen to you about either vitamin D or diets.

Oh, and to a commenter (Amy Alkon #302) who reports a level of 64 ng/ml, Parker-Pope ignorantly extolls:

That’s off the charts high.

Levels should be above 50 ng/ml year-round, in both children and adults. Thanks to Bruce Hollis, Robert Heaney, Neil Binkley, and others, we now know the minimal acceptable level. It is 50 ng/ml. In a recent study, Heaney, et al expanded on Bruce Hollis’s seminal work by analyzing five studies in which both the parent compound (cholecalciferol) and 25(OH)D levels were measured. They found that the body does not reliably begin storing cholecalciferol in fat and muscle tissue until 25(OH)D levels get above 50 ng/ml. The average person starts to store cholecalciferol at 40 ng/ml, but at 50 ng/ml virtually everyone begins to store it for future use. That is, at levels below 50 ng/ml, the body uses up vitamin D as fast as you can make it, or take it, indicating chronic substrate starvation—not a good thing. 25(OH)D levels should be between 50–80 ng/ml, year-round. 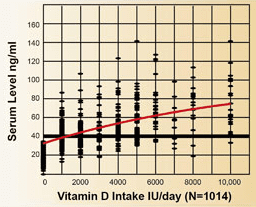 Vitamin D Deficiency and All Cancer, with graphs.

Vitamin D and Melanoma, with graphs.

In all cases (and there’s more) it’s pretty much the same. Everything tracks both by latitude and by time of year (more incidence in winter).

Levels above 60 ng/ml (yes, milliliter) appear to be most protective.

I personally keep mine in the 80-100 ng/ml range. Haven’t been sick since I began this a few years ago, except two head colds, both with mild symptoms and both going completely away in 2 days.

So there you have it for today’s Modern Ignorance Update.