Last night’s dinner using the Sous Vide Supreme. Chicken was brined in a weak solution (5 tbsp per quart of water) for an hour, sealed up with a pinch of sea salt & pat of butter, like here, then cooked at 146F for two hours. Click for the high quality version. 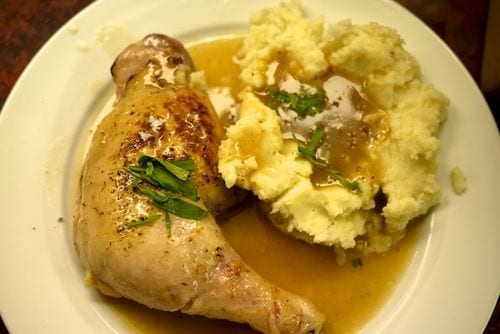 The sauce was a quart of a quality low-sodium, organic, free range chicken broth reduced by about half, along with a pinch or two of a poultry dry rub mix, about 1/2 cup of chopped fresh tarragon, a small sprig of fresh rosemary and two good tbsp of butter. Then it was strained and thickened with a slurry of 1 tsp potato starch. Save a half cup of the cold broth to make your slurry (if it’s not cold it will lump up).

Once the chicken came out I saved the butter-chicken juice from the bag, laid the chicken out on a cookie sheet, brushed it with the juice and fired under the broiler for a short time — then finished it off with the kitchen torch. Tasted the juice and it was very rich, yummy, buttery so I stirred it into the sauce and it made it even better than it was.

The mash was a standard semi-lumpy mix of potatoes, butter & heavy cream. Heat the butter & cream on the stove first so it doesn’t cool off the potatoes. Also, that was just the right amount starch, or, there was so much fat in the meal that it blunted any kind of blood glucose crash. We were all drinking wine and easily stayed up until 1am playing cards, nobody showing any signs of drowsiness.

Dinner for six. Huge hit, especially the sauce. I’m gonna have to start bottling some of my concoctions…