They Had to Say “Caveman,” Dammit!

Well I suppose I shouldn’t chastise the host of the radio show even before I’m on. See the 10:30 slot. It’s a one-on-one I’m told with Rob Breakenridge. I suppose I’m going to have to work in my criticism of the "caveman" style, if I might. 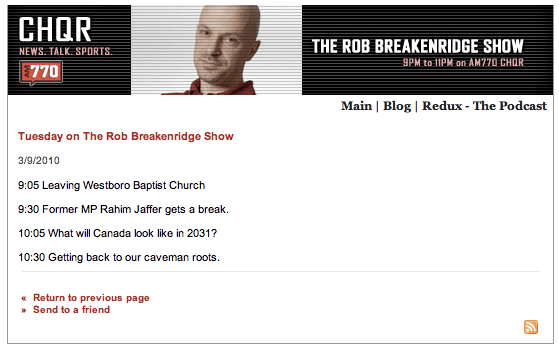 So I was very pleased ’round noonish to get an email from Whitney Deane of CHQR Radio, AM770 out of Alberta, Canada. Doubtless fruit of the Maclean’s piece, I’m just really grateful to be able to take part in this new semi-movement in this way.

Food for thought: how many of you saw this coming, I mean really, potentially big? My answer is that I’d not have gotten involved in its promotion, had I not seen it coming. Given the failures of nearly all diets and the only partial success of others (and major part of partial for Atkins and similar, of course), wasn’t it time for something a bit radical…different, and that smacks of both egalitarian for the commies and individualist for the fascists? I jest, of course.

At any rate, before I get started — and I’m a bit bouncing off walls right now ’cause I want to do damn good — you might be able to catch the live stream via the website, here: CLICK. It should start at 9:30 PST or shortly thereafter.

Update: Show notes and a link to the interview.